Harmony in Blue and Gold:

On July 18, 1894 James McNeill Whistler wrote to his patron Charles Lang Freer with the suggestion that he paint a cabinet-size oil for him, “a figure — to, in a way, hint at ‘Spring’…I daresay I shall manage something charming.” Freer agreed and, after visiting Whistler in Paris and seeing the painting in progress, he paid for the commission in full on November 28, 1894. However, Freer would not receive the work born of this correspondence, Harmony in Blue and Gold: The Little Blue Girl (F1903.89), for nearly a decade.

Freer’s relationship with Whistler began when the collector visited him in his London studio in March 1890. In the years that followed, as Freer’s Whistler collection expanded, he wrote to the artist regularly. Whistler’s wife Beatrix often responded on his behalf. Freer’s friendship with the couple developed over the years that followed, and Beatrix even sketched a caricature of Freer with a halo, a nod to the patron’s beneficence. Freer expected to receive The Little Blue Girl after Whistler exhibited it at the Paris Salon in 1895, but it was not completed in time. Beatrix was stricken with cancer, and Whistler was unable to work.

After seeing the couple in Paris, Freer embarked on his first trip to Asia. Knowing that Beatrix was fond of birds, he sent her blue and gold songbirds from India to comfort her. He had located a pair of shamas outside of Calcutta and asked a British sea captain to care for the birds while transporting them to the Whistlers. Only one of the birds survived the journey and eventually made its way to the couple’s home, where it kept Beatrix company until her death in May 1896. Whistler could not bear to write to Freer for many months after Beatrix’s passing. Finally, on March 24, 1897, he wrote, “Shall I begin by saying to you, my dear Freer, that your little ‘Blue and Gold Girl’ is doing her best to look lovely for you?” He went on to describe the consolation he took from Freer’s songbird during Beatrix’s final moments:

And when she went—alone, because I was unfit to go too—the strange wild dainty creature stood uplifted on the topmost perch, and sang and sang—as it had never sung before!—A song of the Sun—and of joy—and of my despair! —Loud and ringing clear from the skies! —and louder! Peal after peal—until it became a marvel the tiny beast, torn by such glorious voice, should live! And suddenly it was made known to me that, in this mysterious magpie waif from beyond the temples of India, the spirit of my beautiful Lady had lingered on its way—and the song was her song of love—and courage—and command that the work, in which she had taken her part, should be complete—and so was her farewell!

During this period of intense grief, Whistler kept returning to The Little Blue Girl, as if finding solace in reworking its surface. “I write to you many letters on your canvas,” Whistler explained to Freer. Indeed, the artwork had been so entwined with the circumstances surrounding the loss of his wife that the artist could not bring himself to let go of it. The Little Blue Girl remained with Whistler until his death. In August 1903 Freer finally received the painting he had purchased from the artist in 1894. 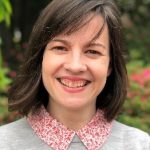 Katherine 'Kerry' Roeder is a Curatorial Fellow in American art at the Freer Gallery of Art and Arthur M. Sackler Gallery.