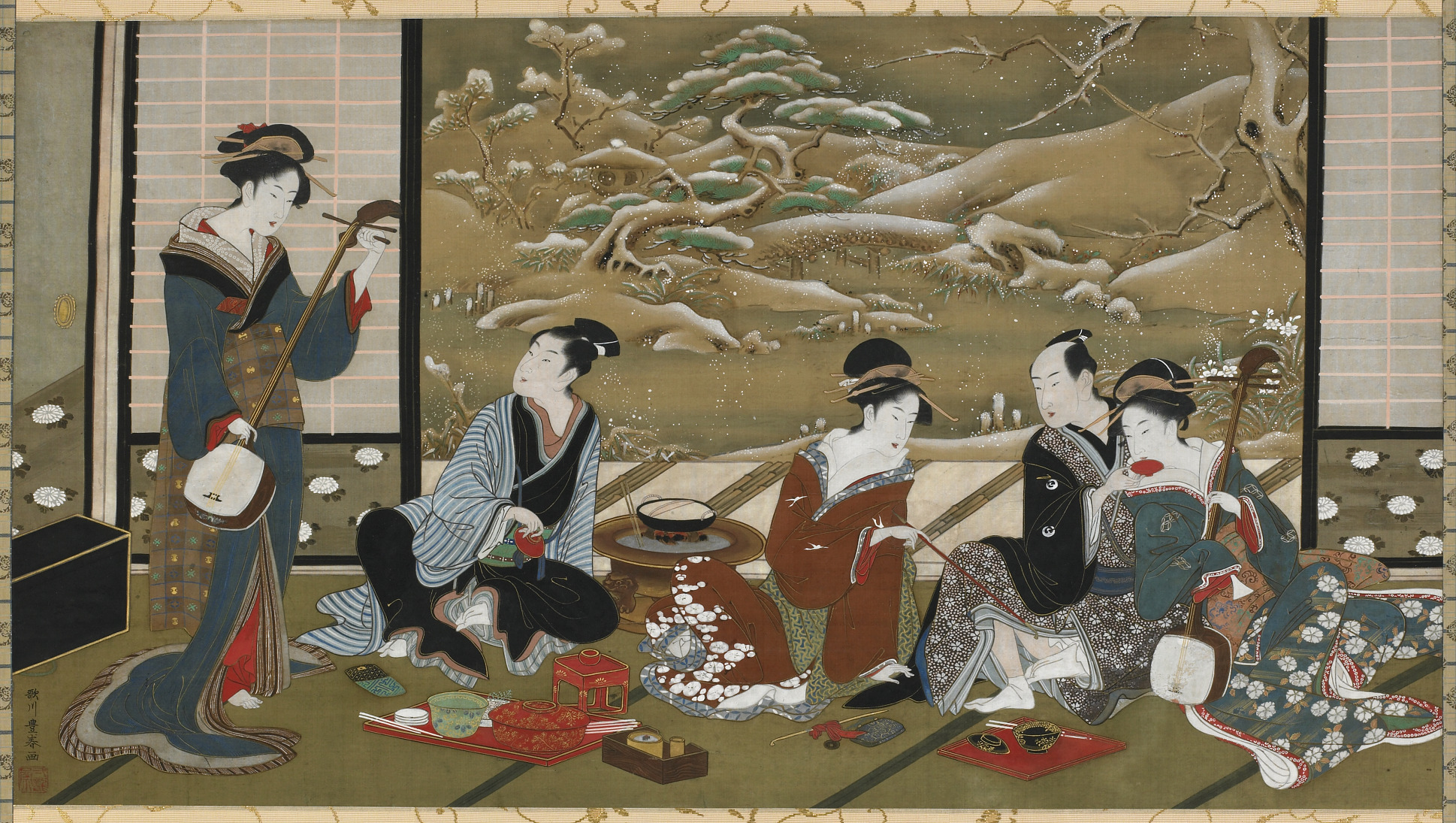 Winter is upon us, and the frosty air has turned our attention toward indoor gatherings with family and friends, safely following COVID-19 precautions, of course. For this month’s installment of Unseen Art History, a blog series highlighting stories about how objects came to the National Museum of Asian Art, read on to explore how Utagawa Toyoharu’s (1735–1814) painting, A Winter Party, came to Washington, DC.

Utagawa Toyoharu, active in Japan during the late eighteenth and early nineteenth centuries, was a successful painter who often rendered scenes of the contemporary Edo period. In the vibrant scroll painting (kakemono) A Winter Party, Toyoharu presents a gathering of revelers who imbibe sake, enjoy food served on lacquer dishes, and relish in the transfixing sounds of the shamisen (a three-stringed Japanese instrument). Happy and comfortable, the group seems unaware of the falling snow covering the landscape outside.

This convivial painting was part of the foundational gift of Asian and American art that Detroit businessman Charles Lang Freer (1854–1919) gave to the United States in 1906. Freer amassed his collection in a variety of ways: traveling to Asia to learn about and purchase works of art; buying from dealers, fellow collectors, and artists; and directly commissioning artists to produce objects expressly for his collection. He acquired A Winter Party from the dealer Bunkio Matsuki (1867–1940) in Boston, Massachusetts.

In 1895, Freer made his first visit to Japan, where he stayed for four months, and began enthusiastically collecting Japanese prints, paintings, and ceramics. When he returned to the United States, the New York dealer Yamanaka & Company and the Boston-based Bunkio Matsuki became Freer’s preferred places to purchase Japanese art. In 1896, Freer visited Bunkio Matsuki’s gallery for the first time; from that point on, Matsuki and Freer became lifelong friends.

Born in Japan, Matsuki had been a Buddhist monk and lived in China. He came to Boston in 1888, learned English, and earned a high school degree. Under the tutelage of Edward Morse—an expert in Japanese pottery—Matsuki eventually opened a gallery, Bunkio Matsuki, Importer of Japanese Fine Arts, on Boylston Street. Matsuki made regular trips to Japan (the first in 1891) to acquire inventory for his shop. Freer, in the late 1890s and early 1900s, provided his friend with generous loans, allowing Matsuki to augment the inventory and scope of his shop. Freer primarily purchased scroll painting and ceramics from Matsuki.

One hundred and twenty-two years ago, Freer purchased Utagawa Toyoharu’s A Winter Party. The painting was part of a shipment of nine scroll paintings dating to the Edo period, which Matsuki sent to Freer for his review. The accompanying receipt from Matsuki notes he is “holding three kakemono” for Freer’s next shipment; was Matsuki playing with his friend, suggesting the received shipment was a preview of the magnificent works to come? Of course, we shall never know! The shipment of nine scroll paintings arrived on Christmas Day 1900, and it only took Freer four days to select seven paintings to add to his growing collection, issuing his dealer payment on December 29. (A Winter Party was among his selections.) When Matsuki received the payment in the new year, A Winter Party and the six other scroll paintings in the shipment officially became Freer’s property.

In 1904, Freer wrote to President Theodore Roosevelt (1858–1919) expressing his desire to give the nation his art collection, money to construct a museum, and an endowment to fund the ongoing study and acquisition of “very fine examples of Oriental, Egyptian, and Near Eastern fine arts.” The Smithsonian Board of Regents, on behalf of the nation, accepted Freer’s gift in 1906. Shortly after the gift was formalized, Freer began transferring parts of his collection to Washington, DC, and the remaining collections came to the nation’s capital upon his untimely death in 1919. A Winter Party was one of approximately 7,500 objects that Charles Lang Freer collected and entrusted to the care of the Smithsonian Institution and can be found in the museum’s collections today.