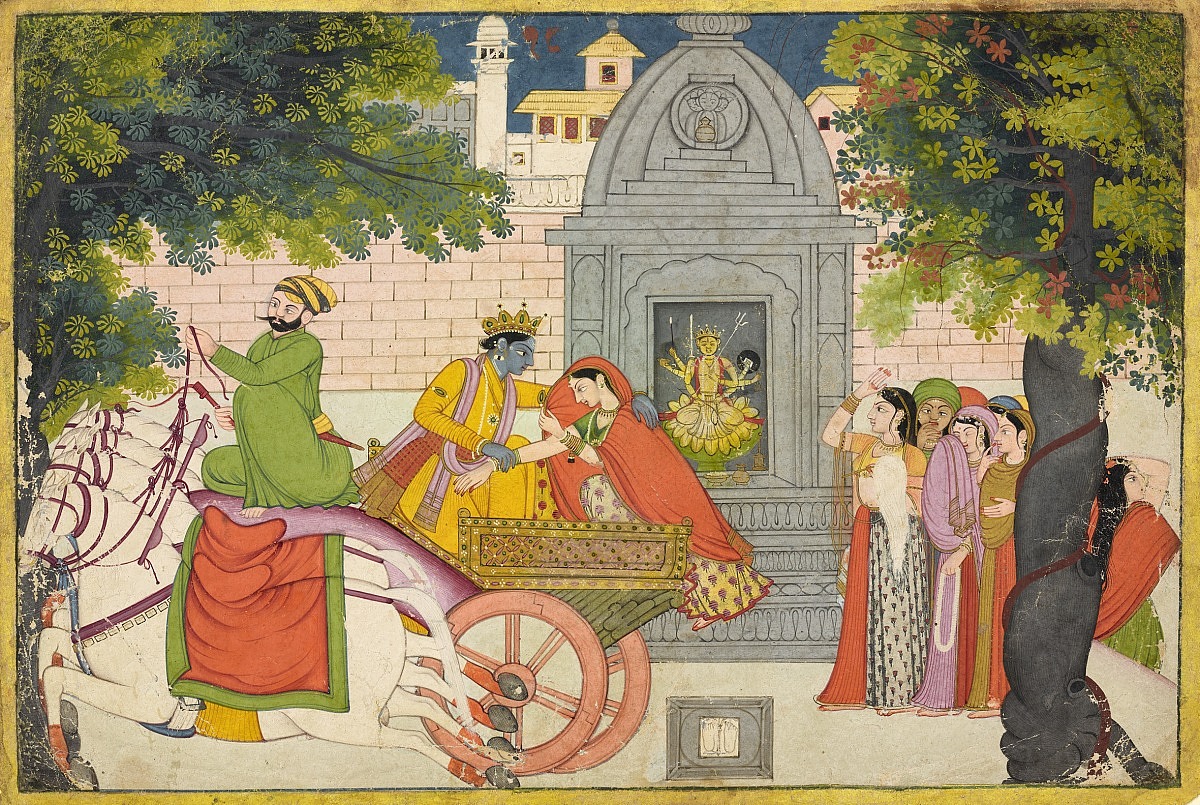 [1] Ralph Benkaim purchased the painting in 1964 from R.E. Lewis, several years before Indian paintings were classified as antiquities by the Indian government, according to his personal records via Catherine Glynn Benkaim.

Recto: numerals 18 in madder brown over the blue sky
Verso: three lines of devanagari text about the painting’s subject; the number 16 above the text

This painting depicts Krishna's 'betrothal' to his first wife, Rukmini. After his defeat of the evil King Kamsa, Krishna embarked on princely adventures that brought him fame far and wide. Princess Rukmini wrote a love letter to Krishna after hearing of his virtues. Because her father had promised her in marriage to an unrighteous prince, Rukmini begged Krishna to steal her away from her family and make her his wife. On the morning of her wedding to the evil Shishupala, Krishna ambushed the city and kidnapped the princess in front of her family and retinue. Here, Krishna, characteristically garbed in yellow, pulls Rukmini into his chariot. Her downturned head is a signifier of her modesty. A driver and four white horses speed the couple away, while Rukmini's ladies-in-waiting tear at their hair and reach out to their princess in anguish. The event unfolds in front of a temple that houses an image of the goddess (Devi).

Krishna's kidnap of the princess Rukmini is controversial passage in the Bhagavata Purana (BhP 10.52-54). It has received much attention and close analysis from scholars and practitioners alike. Practitioners point to Rukmini's circumstances or other scripture as a way to justify the means of the couple's marriage. In her letter to Krishna, Rukmini compared her fiance, Shishupala, to a thieving jackal (BhP 10.52.39) and demanded that Krishna marry her in what is known as the rakshasa style (BhP 10.52.41), wherein a man forcibly abducts a woman in order to marry her. After their marriage, Shishupala and Rukmini's brother Rukmi proved themselves to be unrighteous in the ensuing war. Their defeat at the hands of Krishna's army is depicted as an act of divine restoration (BhP 10.54). Though considered to be one of the immoral forms of marriage, according to the Laws of Manu (chapter 3, verse 24), members of the kshatriya (warrior) caste were allowed to perform this marriage and were thus absolved of the act's unholiness. Therefore, because Krishna belonged to the kshatriya caste, many have interpreted his abduction of Rukmini as allowed by scripture.

This painting balances the tensions inherent in the story. The kidnap, with its overtones of defilement and injustice, is conveyed by showing the grasp of Krishna's hand on Rukmini's arm. The princess's purity is conveyed by her gesture, holding her orange scarf demurely over her head. 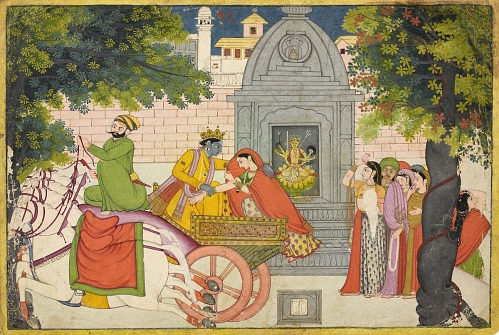