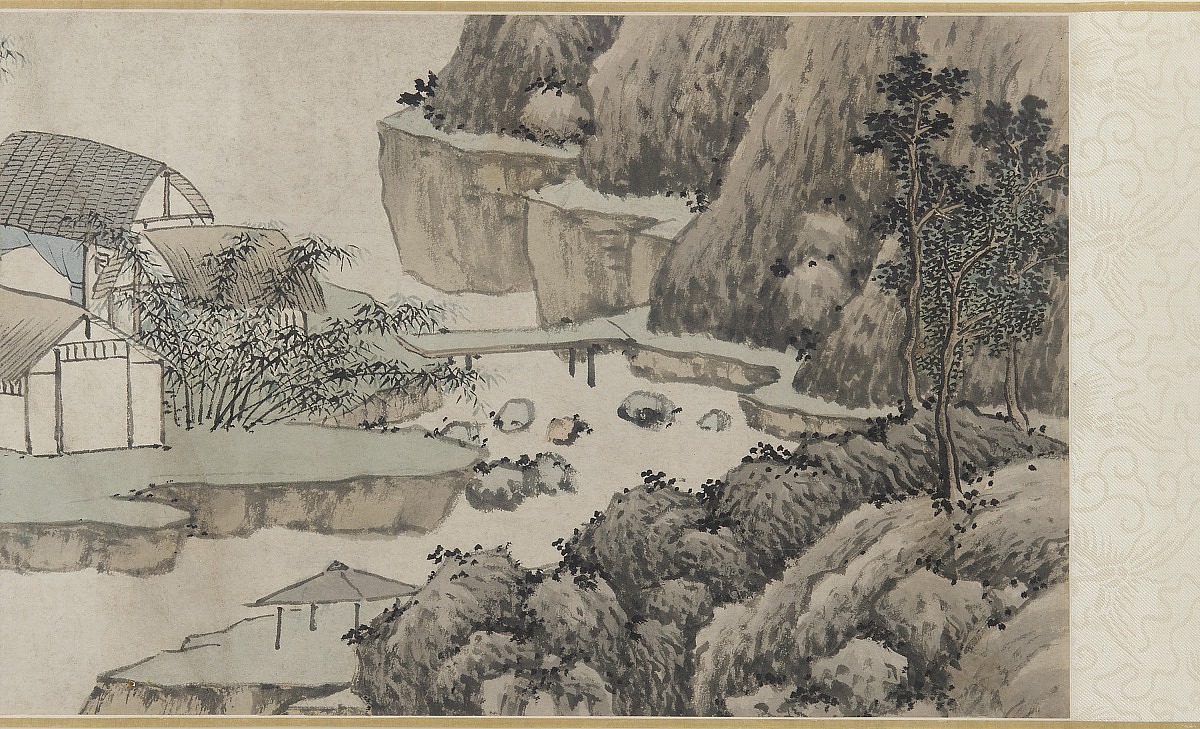 Shen Zhou, a native of Xiangcheng, ten miles north of Suchou, was a poet, calligrapher and painter. He was the teacher of Wen Zhengming and Tang Yin, together with Qiu Ying, they were the Four Great Masters of the Ming dynasty. Shen Zhou was considered as the founder of the Wu School and made Suchou a leading center for art.

This short handscroll depicts a studio, which contains a small group of thatched and tiled huts surrounded by a bamboo grove on a small and flat island at a lake side. A scholar with a lute and a container of books sits in the hut in front of a calligraphy screen. There is a bridge behind the hut connecting the island with the mountain path. An open pavilion is located on the near shore across from the island. There is a group of tall trees in the left foreground hills, which gives a view from the studio.

Although the painting is not signed, the seal 'Chinan' and the distinct personal style of the brushwork and coloring clearly indicate Shen Zhou as the author of the painting. A poem by Shen Zhou in seven-character meter on a separate piece of paper attached at the end of the painting. Both the content of the poem and the size of the paper indicate that it was originally composed and written for this short handscroll. Together with the poem by Wang Ao at the end, both poems concern the owner of the studio's 'The Love of Bamboo.'

According to the records, in 1471, Shen Zhou built the new studio located less than a mile from his old family house. He wrote an essay to obtain bamboo from friends to be planted around the studio. Shen Zhou named the studio Yuzhuchu, 'The Bamboo Dwelling.' His uncle and friends presented Shen Zhou with a series of poems to commemorate the event. Aside from the Sackler painting, there is another famous handscroll entitled 'The Bamboo Dwelling,' listed among the recorded painting by Shen Zhou. Among the many poems attached to that scroll, there is a poem and a colophon dated in 1467 by Hsu Youjen (1407-1472). Another colophon dated in 1478 by Wu Kuan (1436-1504) mentioned that 15 years ago he had visited 'The Bamboo Dwelling.' These colophons indicate that the studio may have already existed in early 1460s.

Although the Sackler painting is not dated, judging from the style and the seal 'Baishih Weng' which was used only after Shen Zhou was sixty, the painting could not have been done before 1486. So the painting may be datable to around 1490. Because Shen Zhou lived for another 19 years, this painting may still be considered as a painting from his late middle period." 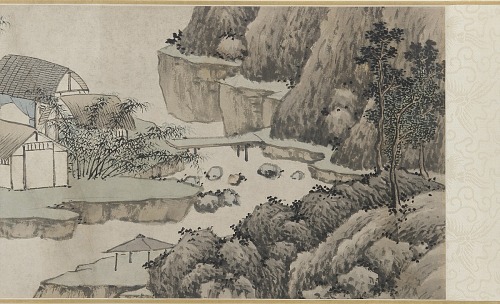