Kingfisher feather headdress ornament in the shape of an upside down bat with reticulated carved jade panel and red-colored stone head.

Kingfisher feather headdress ornament in the shape of an upside down bat with reticulated carved jade panel and red-colored stone head.

1. (Christine Tan, researcher,  26 October 2015)  Previous Description field read: "Headdress ornament turned into brooch, kingfisher and jade. Represents a type of jewlry [sic] that sets a reticulated jade panel into a larger assemblage. Here the jade piece functions as the body of a bat, with a ruby used for the head and metal covered with kingfisher feather for the wings."

Changes to the Description field include: correcting typos; transferring some comments into the Notes field under Curatorial Remarks; and updating the Description field to now read, "Kingfisher-feather headdress ornament in the shape of an upside down bat with reticulated carved jade panel and red-colored stone head."  The comment, "Headdress ornament turned into a brooch," has been removed and noted here instead because examination of the reverse side revealed no pin, nor any evidence that it was ever converted into a brooch.  It is possible that the previous cataloguer may have mistaken the wire that attached the bat to the jade piece for a pin.

The medium field previously read, "Kingfisher feather, gilt metal, ruby?, carved jade."  This seems correct but I have removed "ruby?" and replaced it with "red-colored stone," until conservation can confirm the material with further testing.

Additional changes to TMS include adding "wirework" and "twisted wire" to the Attributes field under Keywords.

This kingfisher feather ornament is in the shape of an upside-down bat with a reticulated carved jade panel and red colored stone head. The piece appears to have been removed from a headdress of the type that would have been embellished with numerous ornaments.  It is likely that the piece would have been carefully displayed with the head facing down, as the upside down bat  was a popular rebus with a long history in Chinese craft and design. The character for bat (fu 蝠) is a pun for the character fortune (also fu 福) and in depicting the bat upside down (which is the character dao 倒), the image conveyed that fortune had arrived (dao 到). Bats appeared in personal ornaments and jewelry as symbols of good fortune and by extension, longevity  as a much desired benefit of good fortune. The wearer would have been fully aware of these symbolic meanings. Comparata of upside down bat ornaments can be found in a headdress dating to the late 19th - early 20th century in the San Francisco Museum of Asian Art, 1995.67.

This Singer piece features the bat's head with a prominent red-colored stone, while the body is formed by a central cloison embedded with a large oval-shaped reticulated jade panel. The jade features botanical patterns of leaves and stems which are further embellished with short hatching strokes and longer brush-like cuts. Per conversation with Jan Stuart, it is possible that the wings of the bat were intended as two dragon heads facing one another. This ornament is in fair condition, missing significant portions of kingfisher feathers in the wing areas, as well as two stones near the bat's head (the eyes?).

The use of kingfisher feathers in this Singer ornament was Chinese jewelry  technique known as dian cui 点翠, or "dotting feathers."  This process consists of taking feathers from the wing or tail of the kingfisher bird (Halcyon smyrnensis) and applying them to a metal substrate of copper or silver. The feathers were meticulously trimmed  to size and then set into cells, or cloisons, made of thin strands of twisted wire. The feathers were adhered within the cloisons with a kind of protein glue.

Hair ornaments such as this were used in a broad range of ways, including personal adornment, theatrical use, decorative art, and export goods.  During the Ming, kingfisher hair ornaments were worn by women of the Imperial court, predominantly in the form of large headdresses and hairpins, but by the Qing period, similar ornaments became more widely available to a broader audience of women and for all manner of buyers. 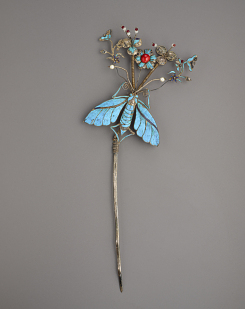 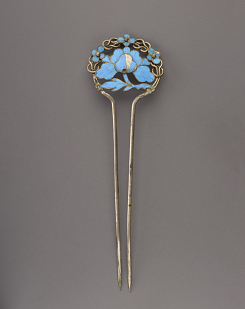 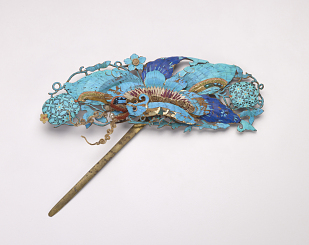 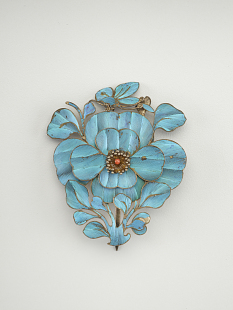 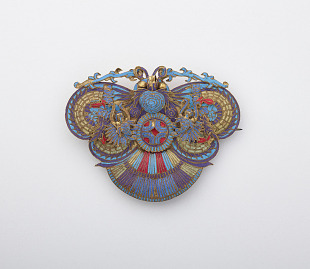 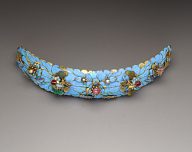 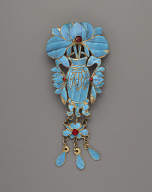 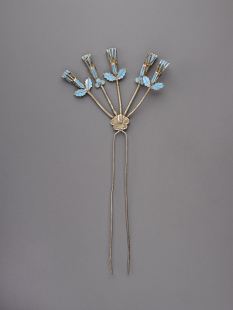 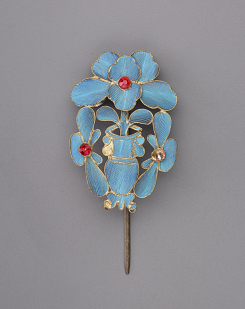 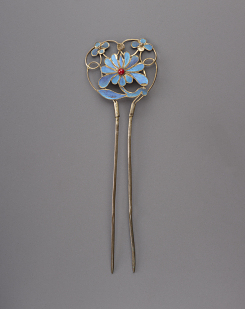 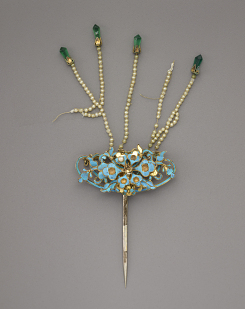 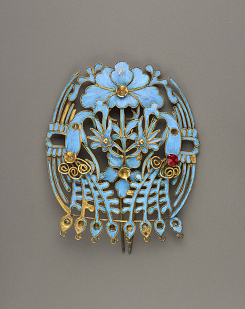 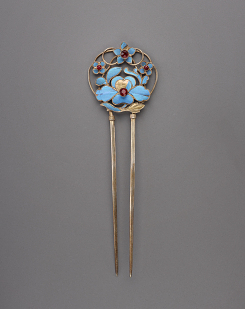 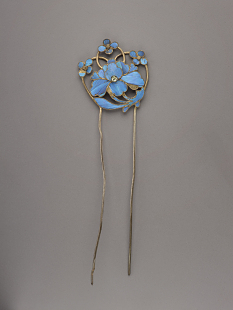