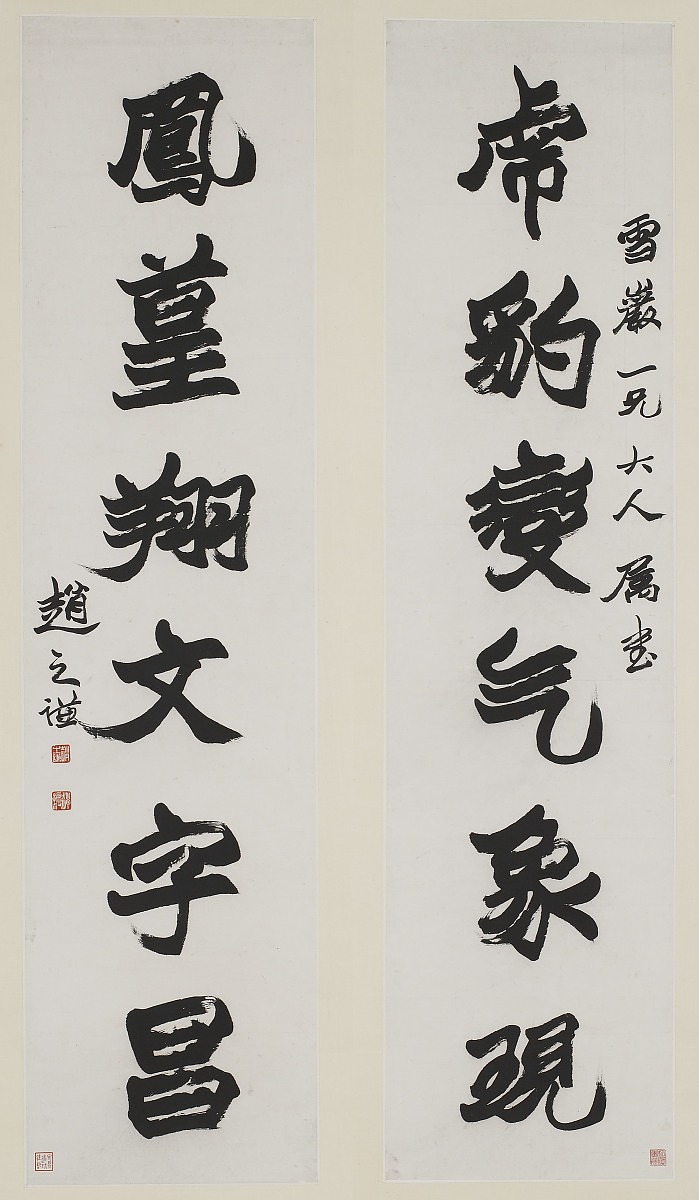 When tiger and leopard change, it shows in the signs of nature;
When the phoenix soars aloft, the world of writing is glorious.

One of the foremost calligraphers, painters, and seal carvers of the nineteenth century, Zhao Zhiqian was born to a merchant family in Guiji (modern Shaoxing), Zhejiang province. A precocious youth, he received a solid education and was intent on pursuing a career as a scholar-official. He passed the provincial examinations in nearby Hangzhou, but was soon forced to flee the city when Taiping rebels captured it in March 1860. Zhao then made his way to the capital Beijing, where his reputation as an up-and-coming artist had preceded him. He failed his first attempt at the national examinations, and spent much of the 1860s either preparing for the exams or traveling back and forth to Beijing in a fruitless quest to pass them. Eventually, Zhao secured a recommendation in 1872 for a government position in Jiangxi Province, where he ultimately served as prefect in three different locations and died of illness in 1884.

Zhao Zhiqian was trained when young in the model-letters tradition, however he was always interested in more ancient forms of calligraphy, and around the age of thirty, he struck out in new directions. Strongly attracted to the works of Deng Shiru (1743-1805), Zhao became a follower of this tradition and eventually developed his own unique style. He is particularly renowned for works written in the early forms of standard script found on stone monuments from the Northern Wei dynasty (386-535), as seen in this couplet. Zhao's calligraphy is characterized by boldness, weight, and amplitude, while subtle changes in the brushstrokes and slight modulations in the otherwise uniform tonality of the ink respond to the complexity of the structural forms. Individual characters lean perceptibly upward to the right, while the rounded, upcurved finishing strokes on several characters furnish the work with a distinctly lively quality. 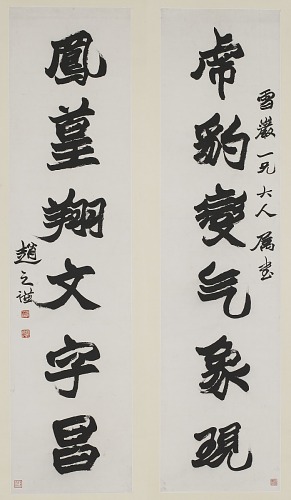