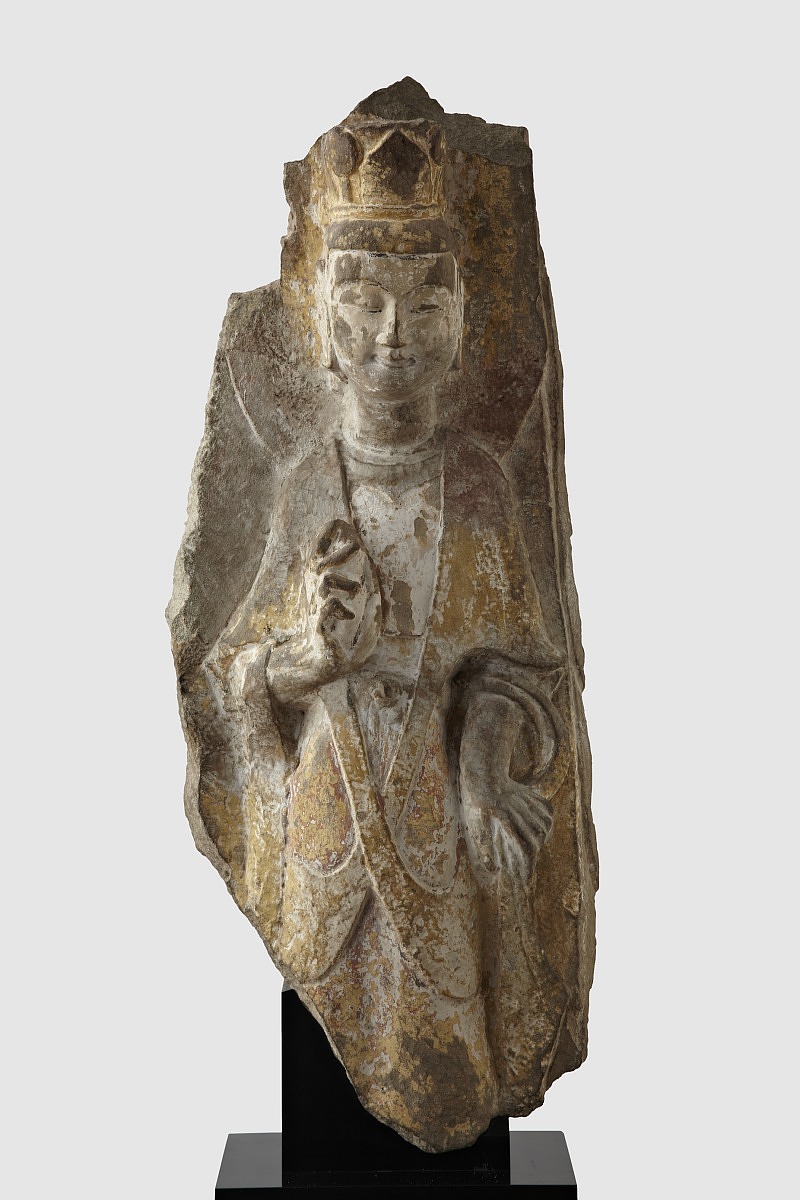 Medium
Sandstone with traces of polychrome

[2] See Loo's stockcard cited in note 1. See also "Catalogue of the Von der Heydt Loan to the Buffalo Museum of Science: Loan Material from Baron Von der Heydt, as of March 1949," where the sculpture is documented under an inventory card no. 4151, copy in object file.

[4] Attorney General, Robert Kennedy authorized transfer of the von der Heydt collection from Buffalo Museum of Science to the custody of the Smithsonian Institution in March 1964. The collection was transferred to the National Museum of Natural History. In 1966 US Congress legislated transferring the title of the von der Heydt collection to the Smithsonian Institution, see Public Law 89-503, 80 Stat. 287, July 18, 1966. The sculpture was accessioned under no. 448099, see "Smithsonian Office of Anthropology Accession Data," copy in object file.

[5] The sculpture was among 13 objects in the von der Heydt collection transferred from National Museum of Natural History to the Freer Gallery of Art, see "Smithsonian Institution Intramural Transfer of Specimens" memorandum, dated January 29, 1973, copy in object file. It was accessioned to the Freer Gallery Study Collection under no. FSC-S-9 and subsequently transferred to the permanent collection in August 1978.

This figure of a bodhisattva, or enlightened being, is smaller than but similar to the Northern Wei dynasty (386-534) figure from the Gongxian cave-temples in Henan Province displayed in the center of the room to your left. From the time this small sculptural fragment entered the collection in 1978, scholarly opinion has held that it is from Gongxian; however, an examination of the positions of missing bodhisattva figures from Gongxian in 2001 indicated that this sculpture was not from that site. Probably the figure was taken from one of numerous small, not well-known cave-temples in Henan Province. The crown, composed of lotus petal shapes, is close in form to those appearing on Gongxian bodhisattvas, but here there are no disks or ribbons on the shoulders. The carving is not as sharp, and the low-relief figure is more softly modeled than most Gongxian figures. Traces of pigment on the surface are a reminder that Chinese stone sculptures were brightly painted in their original form. 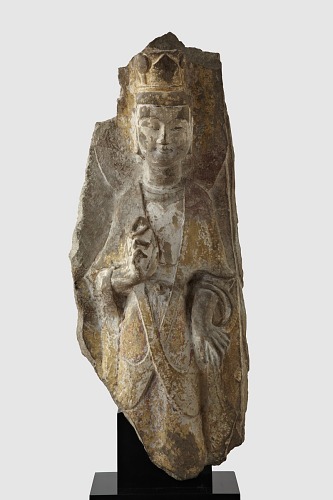