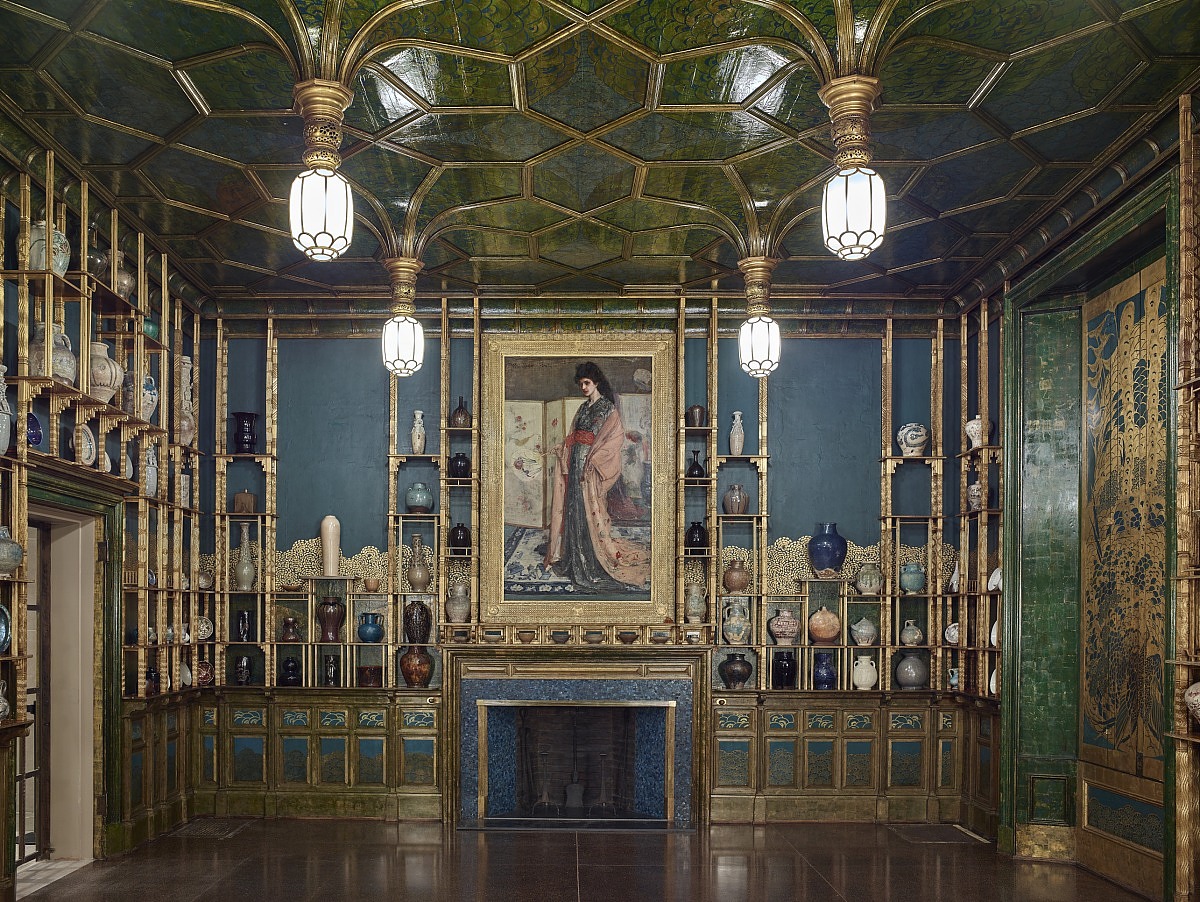 [1] The Peacock Room was once the dining room in the London home, 49 Prince's Gate, of Frederick Richard Leyland. When Frederick Richard Leyland died in 1892, 49 Prince's Gate - and its contents - was offered for sale. Leyland's porcelains and other treasures were sold. Whistler's painting The Princess from the Land of Porcelain (F19023.91) was removed from the Peacock Room and sold at Christie's in London on May 28, 1892, to Alexander Reid, a Glasgow dealer. The house - which still contained the Peacock Room - did not bring a high enough offer and it was withdrawn from sale. It was finally purchased in 1894 by Mrs. James (Blanche) Watney. Upon discovering that the Peacock Room could be taken apart and reassembled, Mrs. Watney decided to sell the room. In 1903, Mrs. Watney set the price at 10,000 guineas and engaged Messrs. Brown and Phillips of the Leicester Galleries in Leicester Square as agents. Unable to purchase, dismantle, and reassemble the room on their own, Ernest Brown, one of principals, enlisted the cooperation of Obach & Co., a larger gallery on New Bond Street. Although Gustave Mayer, the managing partner of Obach & Co., offered the room to Charles Lang Freer on January 26, 1904, a sale did not take place at this time, as Mrs. Watney withdrew the offer. On February 6, 1904, Mayer wrote to Freer that "the present owner, a lady of extraordinary changeableness, has changed her mind three times in ten days, completely reversing her decision in each case" (see Mayer to Freer, February 6, 1904, CLF Papers/Obach). Mrs. Watney changed her mind yet again several weeks later, and on February 17, 1904, Mayer offered the room to Freer for 8,500 guineas, including the cost of disassembly and packing for shipment to Detroit.

The Peacock Room was originally the dining room in the London home of Frederick Richards Leyland (1831-1892), a wealthy shipowner from Liverpool, England, who was James McNeill Whistler's leading patron. The architect Thomas Jeckyll (1827-1881) designed the room, constructing an intricate lattice of shelving to contain Leyland's collection of Chinese blue-and-white porcelain, mostly from the Kangxi era (1662-1722) of the Qing dynasty. Antique Dutch gilt leather hung on the walls and a painting by Whistler, The Princess from the Land of Porcelain, was given the place of honor above the fireplace (see F1903.91a-b).

Jeckyll had nearly completed his decorative scheme when an illness compelled him to abandon the project. Whistler, who was decorating the entrance hall of Leyland's house, volunteered to finish Jeckyll's work in the dining room. Concerned that the red roses adorning the leather wall hangings clashed with the colors in The Princess, Whistler suggested retouching the leather with yellow paint, and Leyland agreed to that minor alteration. He also authorized Whistler to embellish the cornice and wainscoting with a "wave pattern" derived from the design in Jeckyll's leaded-glass door, and then went to his home in Liverpool.  During Leyland's absence, Whistler grew bolder with his revisions. He covered the ceiling with squares of dutch metal (imitation gold leaf) and a lush pattern of peacock feathers, gilded the spindle shelving, and painted an array of magnificent peacocks on the inside panels of the shutters.

As word of his remarkable decoration got out, Whistler began entertaining visitors and amusing the press in Leyland's home--audacious behavior that, coupled with a dispute over payment for the project, provoked a bitter quarrel between the painter and his patron.  Consequently, Whistler coated the costly leather with Prussian-blue paint and on the vacant wall opposite The Princess depicted a pair of fighting peacocks. The angry bird on the right was given silver throat feathers in reference to the white ruffled shirts that Leyland always wore; the other, docile peacock was crowned with a silver crest feather reminiscent of the single white lock that rose artfully above Whistler's forehead. Regarding the dining-room decoration as a three-dimensional painting, the artist obtained a blue rug for the floor, signed the composition several times with his butterfly emblem, and gave the room the title Harmony in Blue and Gold: The Peacock Room.

The Peacock Room remained intact and fully furnished with Chinese porcelain until Leyland's death in 1892. Twelve years later it was sold to the collector Charles Lang Freer (1854-1919), who had purchased Whistler's Princess only the previous year. The room was dismantled in 1904 and moved to Freer's house in Detroit, where it was used to display his own collection of ceramics. After Freer's death in 1919, the Peacock Room was reinstalled at the Freer Gallery of Art, which opened to the public in 1923. The Chinese porcelain now on the shelves is similar to the collection for which the room was originally designed. 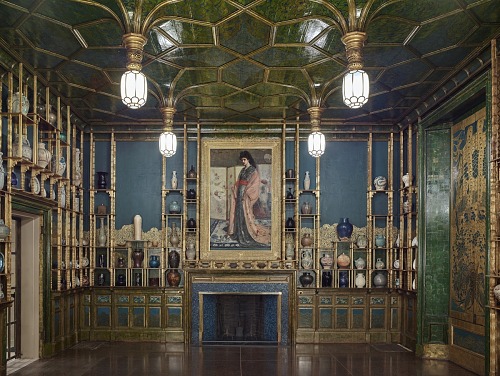 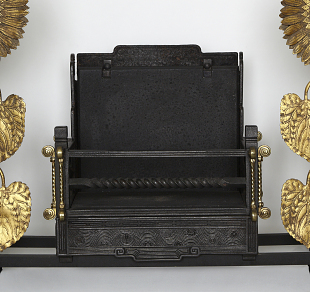 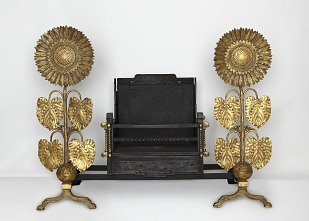 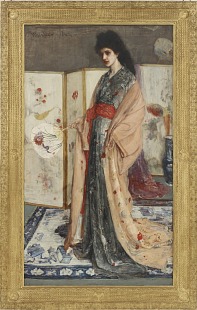