There are some cities you would expect to be frozen in time, perpetual testaments to past eras, like Pompeii or Petra. Mecca is not that city. Instead, the city is more modern than Times Square—and twice as crowded. At its axis is the holiest shrine in Islam, the Kaaba, believed to be built by the Prophet Abraham (Ibrahim) and his son Ishmael (Isma’il). The Kaaba sits at the center of the Masjid al-Haram (Great Mosque), itself encircled by hotels, restaurants, and many, many shops, all catering to the hordes of pilgrims who visit the site daily. This January, I was part of that horde.

The view from the hotel-mall-clocktower complexes: Ahmed Mater’s Nature Morte (S2014.6) and my parents at a window in our hotel overlooking the Kaaba.

Performing a “small pilgrimage” (umra), I was able to witness the extraordinary—and ongoing—transformation of the city, as captured by the photographs of Ahmed Mater. Our first stop was the hotel: a new skyscraper located just behind the enormous clocktower-mall-hotel complex that has dominated the Mecca skyline since 2012. From there, we were within walking distance to the Masjid al-Haram.

The outer mosque is a construction zone. Cranes intermix with minarets in the horizon. Navigating through the labyrinthine mosque was complicated, as sections were blocked off for renovation and temporary structures had been created to redirect pilgrims. And it was loud. The chanting of pilgrims both near and far intermingled with individuals on cell phones and posing for selfies. Yet all of it seemed to fade at that first glimpse of the Kaaba, when we merged into the circumambulating crowd. Stunned to be in front of the structure we turned toward in prayer five times a day, we were oblivious to our surroundings.

My parents’ memory of Mecca and Medina paints a picture that is almost incompatible with the cities today. When they made the obligatory pilgrimage (hajj) as newlyweds in 1977, the crowds were smaller—as were the mosques. Instead of skyscrapers and malls surrounding the Masjid al-Haram, there were small houses and traditional bazaars.

My mother recalls praying on sand outside the Mosque of the Prophet (Masjid al-Nabawi) in Medina. Now the plaza is entirely paved in marble. The small historic mosques in Medina, each tied to a critical moment in the biography of the Prophet Muhammad, were then barely able to hold fifty people. They since have been rebuilt in the distinctive contemporary style of the Arabian Peninsula and accommodate hundreds. The huge increase of annual hajj pilgrims, from less than a million in the ’70s to more than two million in 2015, has pushed the mega-mosques beyond capacity, partially fueling these programs of expansion and renovation. The two holiest cities of Islam no longer feel historic as practical demands and ideologies supersede preservation. My parents’ nostalgia for the older cities was palpable as we visited each mosque.

In Medina, the juxtaposition of historic and modern was more apparent. Walking through the mosque to the Tomb of the Prophet, we could see subtle shifts in architectural style, from the very recent courtyard (left) and extension of the prayer hall (center), to early twentieth-century additions, and finally, the late Ottoman-period prayer hall that contains the tomb (F1907.222).

Running late for prayer one evening, my sister and I were still making our way through the mall within the gigantic clocktower complex when the call to prayer sounded. At that signal, every shop closed, and what had seemed like decorative floor tiles turned into guidelines for prayer lines. At that moment, we felt the same sense of community my parents had described, a feeling that permeated each aspect of our own pilgrimage. Mecca may have gotten a twenty-first-century facelift, but the Kaaba is still at its heart. Gazing at Ahmed Mater’s work in Symbolic Cities, I am transported back to those moments—when the disjunction between architecture and place was superseded by pure awe.

Symbolic Cities: The Work of Ahmed Mater is on view through September 18, 2016. 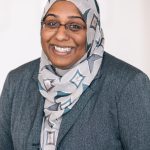 Sana Mirza is an education specialist at the Freer|Sackler.