For as long as I can remember, Lunar New Year has been the highlight of my year. Growing up in Taipei, Taiwan, I would receive red envelopes filled with money from my parents, grandparents, older relatives, and sometimes family friends. My grandmother was known for throwing very festive New Year gatherings with a spread of traditional Chinese dishes on the dinner table. I remember dining on a whole fish, Chinese New Year’s cake (niangao 年糕), and a traditional Chinese dessert of fermented rice with glutinous rice-flour balls (jiuniang tangyuan 酒酿汤圆).

Alongside the smell of incense burning in honor of our ancestors, our time together was filled with the sound of my grandparents and their friends speaking in their thick Shanghainese accents. When my grandparents left Shanghai and relocated to Taipei during the Chinese Communist Revolution in 1949, they carried with them their dialect, their belongings, and their traditions.

Fast forward to the 1990s: my family and I emigrated to the United States, and I became preoccupied with assimilating into our new culture—and increasingly attached to pizza and MTV—while my ability to speak Mandarin slipped away one tone at a time. In those years, my mother sent us to weekend Chinese schools. And when Lunar New Year arrived, she would do her best to put together a hot pot (huoguo 火锅), a quick and convenient approach to a New Year dinner, to help hold on to our heritage.

Over the years, celebrating Lunar New Year has become less of a priority; keeping up with just one calendar and one New Year is hard enough! But as I embark on the journey of becoming a parent this year, I catch myself reminiscing about my childhood. Today, the idea of Lunar New Year is less about red envelopes and which Chinese dishes are on the dinner table, and more about the layers of cultural experiences and traditions that made me who I am. The beauty of a Ming ceremonial dish comes from not only its formal qualities but also the history it carries. So too does the beauty that surrounds the celebration of our cultural traditions. 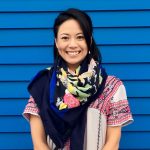 Wendy Wang is an education coordinator at the Freer|Sackler.