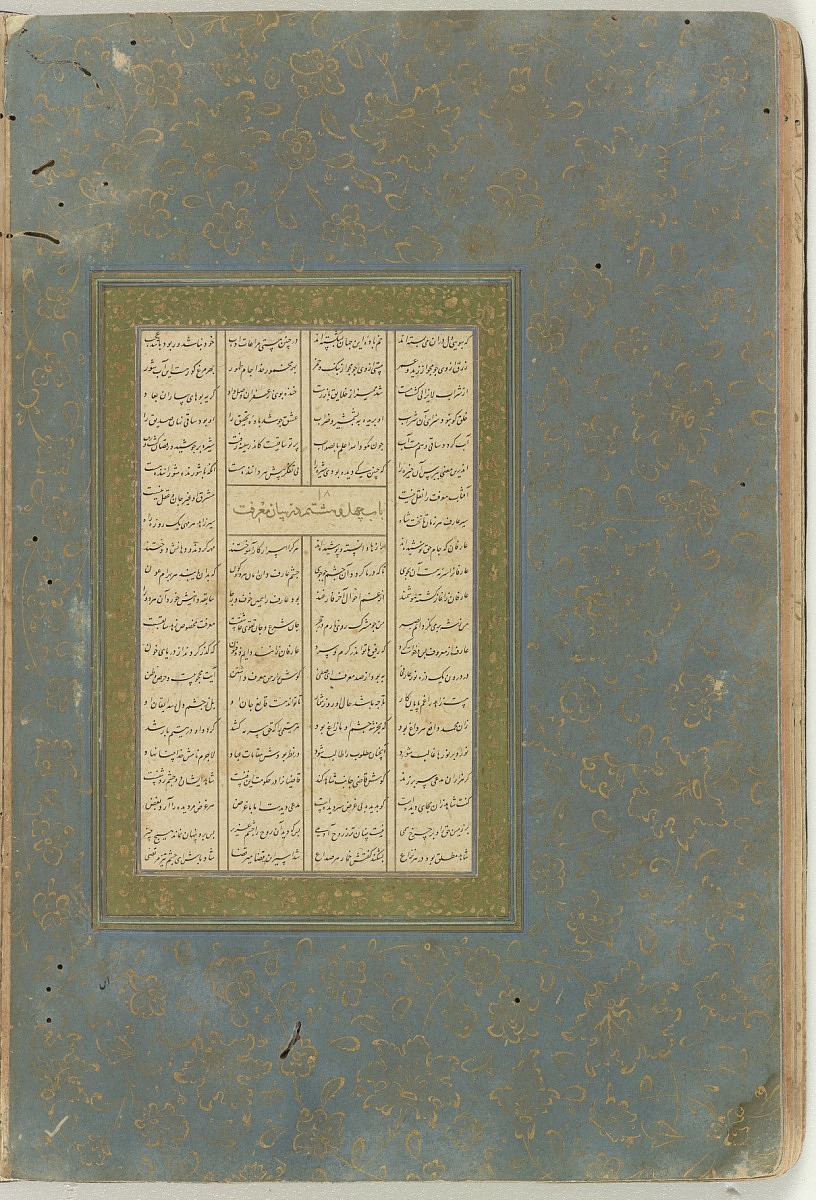 Flyleaf:
"God is greatest. This collection, which is a selection of four books, is my personal property. Value: Rs. 3,000, and it is in pointed miniscule script, better than which has not been written."

"God is greatest. On the 5th of Azar [regnal] year I [this book] entered the library of this petitioner at the divine court. Nuruddin Jahangir Shah son of Akbar Padishah."

"In the name of God the Compassionate, the Merciful. This precious collection, which contains a selection from the Mathnawi [of Jalaluddin Rumi] and a selection from the Hadiqa [Hadiqat al-haqiqat by Sana'i] and others, entered the library of this petitioner at the divine court on the 25th of Bahman, corresponding to the 8th of Jumada II 1037 [February 14, 1628], which is the day of [my] blessed accession. Written by Shihabuddin Muhammad Shahjahan Padishah son of Jahangir Padishah son of Akbar Padishah. Value: Rs. 4,000."

Fol. 54 recto:
"Completed at the hand of the poor sinful slave, Muhammad Qasim b. Shadishah."

Fol. 69 recto:
"God is great! Selection from Mawlavi's Mathnawi, selection from the Khamsa, Bustan and Hadiqat al-haqiqa written by Mawlana Mir-Ali and Sultan-Muhammad Nur and Sultan-Muhammad Khandan and Muhammad-Qasim b. Shadishah, with a painted sunburst by Master Bihzad, margins in gilded, colored paper for (?) Mirza Aziz Koka. 69 individual [folios]. Rs. 2,000."

The small, circular composition set in an illuminated border appears in a poetic anthology, copied in minute and exquisite nasta'liq script. The text surrounding Bihzad's composition is from the celebrated Mathnavi by Rumi (died 1273) and relates how an old man cautions a youth against excessive pride and arrogance. More loosely painted and less detailed than some of Bihzad's other works, the illustration brilliantly contrasts the frailty of the old sage (on the right) with the elegant appearance of the conceited youth in an orange robe. This painting is probably one of Bihzad's last known works.

One of the most celebrated painters at the court of Sultan Husayn Mirza Bayqara (reigned 1470-1506) was Kamal-uddin Bihzad (circa 1467-1535). Orphaned at a young age, Bihzad was reared and trained by Aqa Mirak, another renowned painter in Herat. Towards the end of his life, Bizhad, who became known as the "rarity of his time," moved to Tabriz in northwestern Iran, where he died in 1535. Bihzad and his contemporaries are largely accredited with introducing a new sense of naturalism into Timurid painting. In addition to refining the spatial clarity and ornamental elaboration of earlier fifteenth-century painting, Bihzad incorporated lively scenes from everyday life into his compositions. His carefully delineated figures show considerable psychological depth and seem to occupy real space. These new conventions, however, should not be confused with the interest in naturalism found in Western painting, for Bihzad and his fellow artists still worked within the strict conventions of traditional Persian painting.

Bihzad signed only a few works, but because of his legendary status, especially after his death, numerous compositions have been erroneously ascribed to him. Among the three paintings on view, An Old Man and a Youth is a rare signed work, believed to be one of the artist's last compositions. The other two have been firmly attributed to the master. 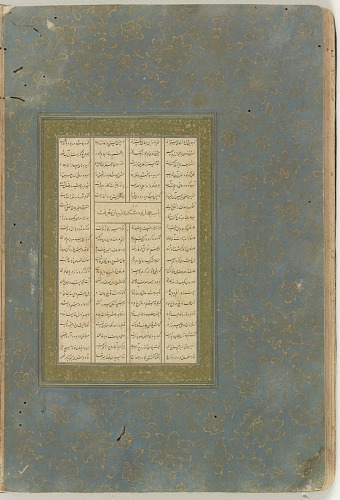