With his brilliant new fiction feature A New Old Play, the contemporary Chinese artist and independent director Qiu Jiongjiong has emerged as one of the most daring and innovative filmmakers in China. Born in 1977 in Leshan, Sichuan province, Qiu grew up in an environment steeped in traditional Chinese opera. His grandfather, Qiu Fuxin (the subject of Ode to Joy), was a celebrated performer of clown (chou) roles in Sichuan opera. The elder Qiu, who was born in 1927 and died in 1987, performed with the Xinyouxin Opera Troupe, where Qiu’s maternal grandmother Lin Zhigang (the subject of My Mother’s Rhapsody) met her husband, the troupe’s ticket seller. Qiu’s father, Qiu Zhimin (the subject of The Moon Palace) is a restauranteur, liquor aficionado, and unparalleled raconteur who remains one of the primary inspirations for Qiu Jiongjiong’s cinema universe.

Qiu grew up steeped in the backstage atmosphere of traditional Chinese theatre, and most of his works remain infused with the sounds and sights he absorbed there. Qiu Fuxin was also responsible for his grandson’s unorthodox art education. Qiu Jiongjiong first established himself in Beijing as painter of fascinatingly distorted, subjectively colored, eerily cheery figurative portraits that have captured the attention of Chinese collectors.

His independent cinema career started with the purchase of a mini-DV camera in 2006. Without formal cinematic training, Qiu started as a fearless eccentric, creating experimental documentaries with the series of effervescent, slyly humorous family portraits mentioned above. He cuts rapidly but always legibly between different materials and times in his six documentaries, with a darting, cheerfully voyeuristic handheld camera that captures striking black-and-white images. Sound and image are often provocatively decoupled; Qiu underlays these elements with traditional Sichuan opera and contemporary art music. He enjoys disrupting, or “alienating,” as he said, the expository storytelling of his spellbinding subjects with fleeting image of birds, cupids, rivers, landscapes, paintings . . . all of which his sound/images assemblies activate with genial resonances and buried structural interplays.

Besides his family portraits, Qiu has created a “chatterbox” trilogy: a retired cop (Portrait of Mr. Huang), the trans performer Fan Qihui, aka “Bilan de Linphel” (Madame), and a persecuted intellectual “rightist” (Mr. Zhang Believes); three more storytellers whose discourses, transformed by Qiu’s stylistic interventions, evoke and record social and political material that mainstream Chinese culture is uncomfortable with, to say the least.

The summation of Qiu’s work so far (he is only 44) is his masterpiece A New Old Play: this is his first work of fiction, a dense experimental entertainment. It weaves together themes, motifs, and characters from all his previous works in an artisanal epic that spans fifty years in the history of an imaginary Sichuan opera troupe.

Qiu’s works’ density and range—with a tonal variety spanning the deeply mournful to the resplendently comic—accommodate unprecedented evocations of the darkest episodes of China’s recent history. But Qiu insists on embedding these in something else: a celebration of creative popular arts whose vitality and persistence offer emotional reassurance, ideological provocation, and moral inspiration.

This essay was originally commissioned by the International Film Festival Rotterdam.

The Daring, Innovative Films of Qiu Jiongjiong can be viewed beginning Friday, May 13, through Sunday, May 29, 2022, where available. Pre-register for the films now on Eventive. 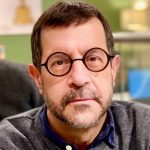 Shelly Kraicer is a writer and independent film curator based in Toronto. He originally curated the Qiu Jiongjiong retrospective for the International Film Festival Rotterdam.