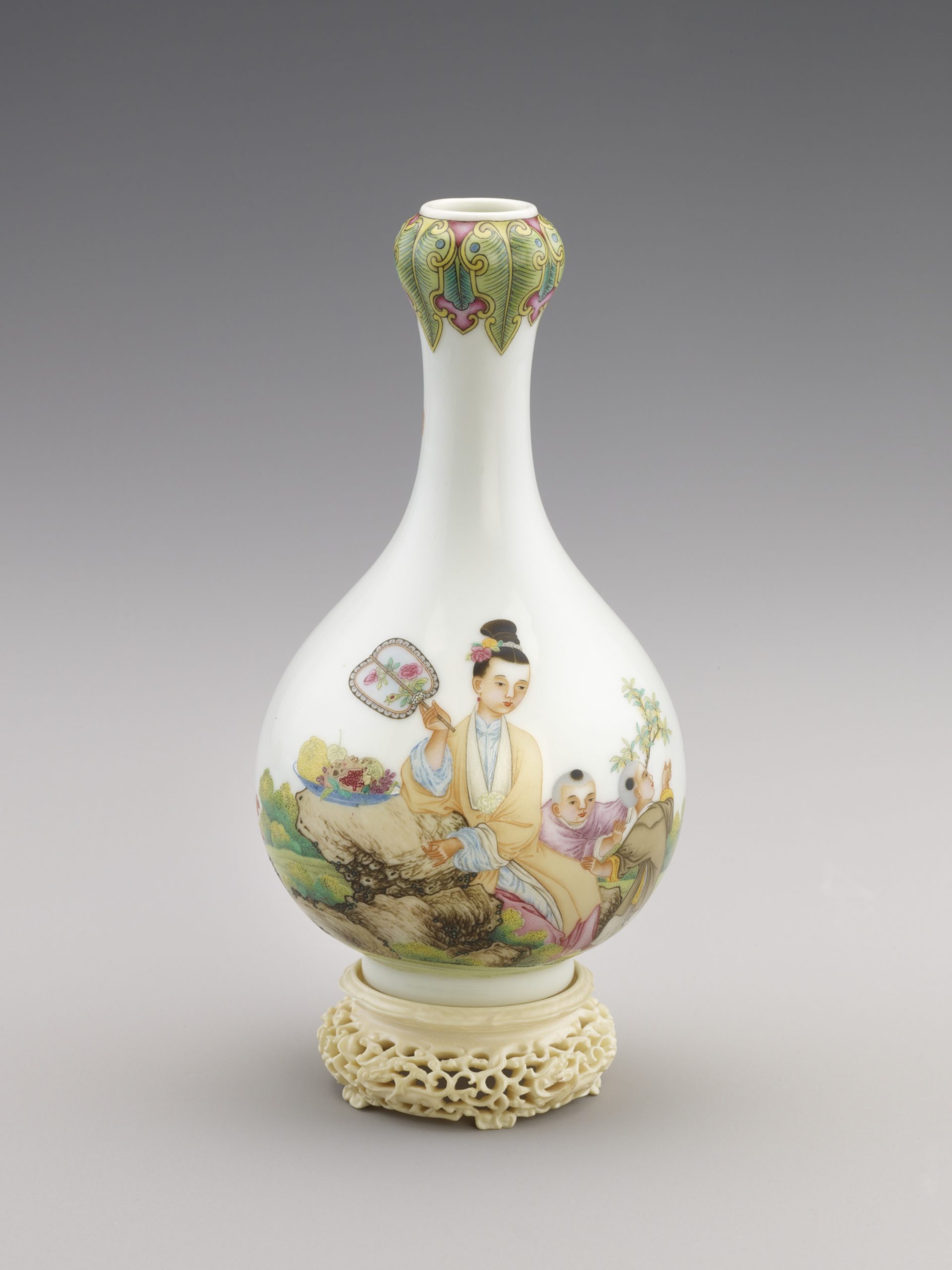 This is a beautiful porcelain vase. It has a rounded body and slim, tall neck. The mouth resembles a bulb of garlic and is decorated with a stylized leaf pattern. The painting on the vase depicts a lady and two children in a blooming garden. The woman sits on a rock, holding a fan in her right hand. Next to her is a dish of pomegranates that symbolize fertility. One of the boys holds a branch of Osmanthus. The Chinese name for Osmanthus is a homophone for “noble.” As the plant blooms during the same month as the imperial examinations in the fall, it also signifies literary success. These two concepts reveal the painting as symbolic for the wish to bear high-ranking sons. The two-sentence poem sets an autumnal mood:  "The infinite moon is born in the branches/When blossoms are at their fullest, autumn naturally has come."

The vase was potted in Jingdezhen(jing-duh-juhn) where imperialrelating to an empire, an emperor, or the home of royals. kilns of the Ming (1368–1644) and Qing(ching) (1644–1911) dynasties were located. It was then sent north to Beijing to be decorated by court painters. The painting on the vase was minutely drawn in fine enamelan opaque (dark) paste that is used to add color to hard surfaces like metal. It turns into a glass-like texture, which also provides protection, when heat is applied. (glass paste) colors. The modeling of the figures (especially the faces and hands), as well as the rendering of the and shrubs in the background, reveal an awareness of European painting techniques. This reflects the influence of Jesuit(jezh-oo-iht) a member of the Society of Jesus, a Roman Catholic religious order founded by Ignatius of Loyola. painters such as Giuseppe Castiglione (1688–1766) who were active at the court.

The fine quality of the porcelaina hard, fine-grained, nonporous ceramic ware that is usually translucent and white. and delicate painting details both suggest that the vase was made for and used by the court. The four-character Qianlong(chee-en-long) (reigned 1736–95) mark on the bottom of the vase reinforces this conclusion. During the reign of the Qianlong emperor, imperialrelating to an empire, an emperor, or the home of royals. paintings and porcelain frequently shared a palette and similar subjects, as seen in this vase and a painting (F1980.126) by the Qing(ching) court painter Ding Guanpeng (active 1726–after 1770). Vases with this type of painting were made in a very small number, so there are relatively few comparisons.