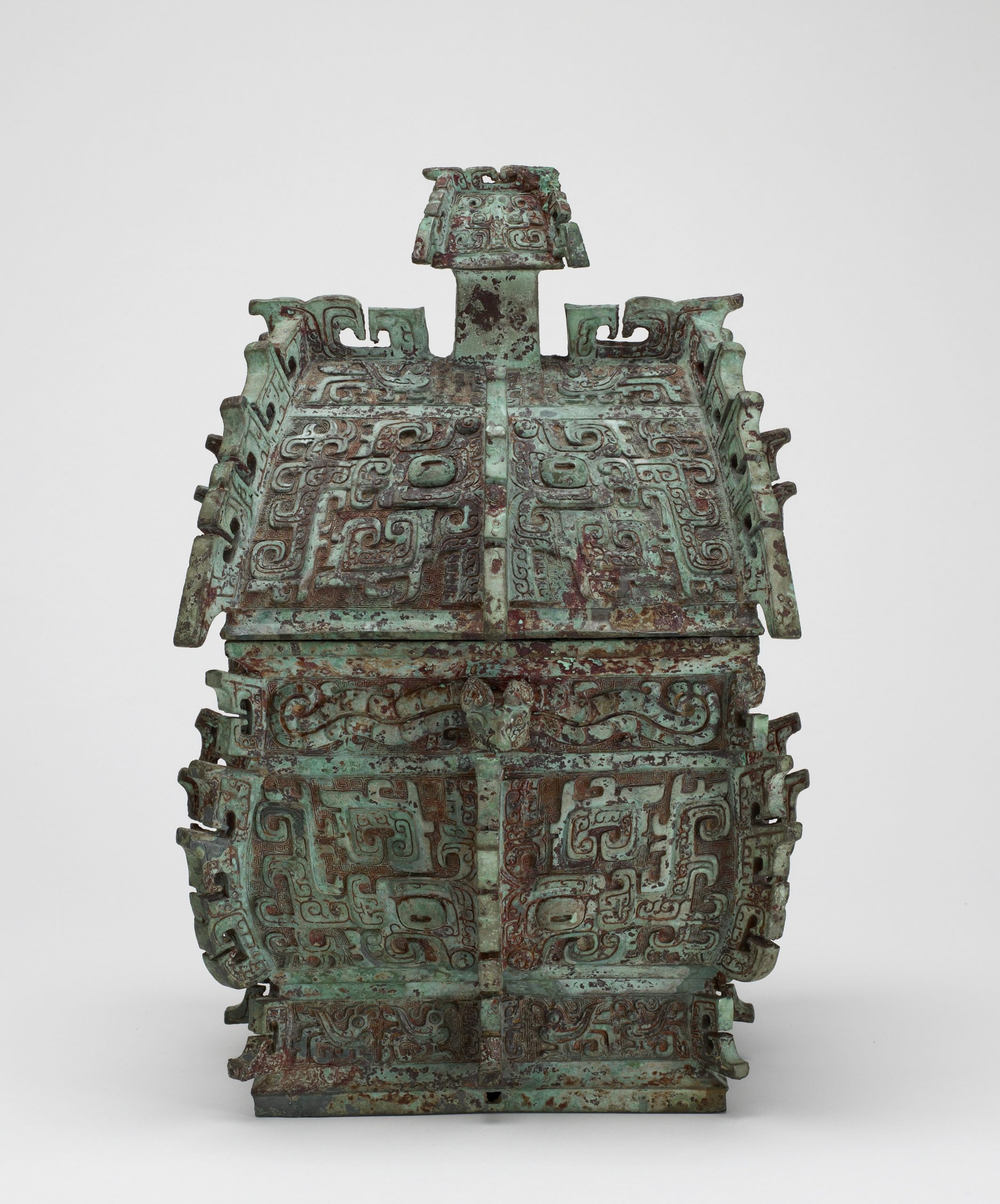 This bronzea mixture of copper, tin, and often lead that produces a strong metal. container, made to hold wine, is called a fangyi(fahng-ee) a square bronze vessel for holding wine. in Chinese (fang means square and yi means vessela container such as a cup, bowl, pot, or dish.). It looks like a house: rectangular with a roof-shaped lid topped by a roof-shaped knob. Vertical ridges at the center and corners of each side reinforce this architectural character and add to its visual appeal. Each side has a taotie(t-ow-tee-eh) a stylized monster face-mask design pattern commonly found on ancient Chinese bronzes with symmetrically arranged eyes, ears, horns, snout, and jaw., a frontal animal-like maska face covering that usually has a design on it., executed in multiple planes of reliefthree-dimensional forms that protrude from a flat surface.. Besides the eyes, horns, snout, and jaws, the taotie mask also has a split animal-like body with a foot and tail shown in profile on either side of the mask. Narrow bands with paired birds or split serpents with tiger heads appear below and above this taotie motifa repeating design, pattern, or image.. The lid has a nearly identical taotie design but inverted, like a mirror-image. Made more than three thousand years ago, the surface of the bronze is not the shiny silvery color it used to be. Instead, the whole surface is covered in areas of greens, blues, and reds as a result of corrosion, similar to the way a penny is shiny when it is new but becomes duller over time. Bronze is an alloy consisting primarily of coppera soft malleable metal of a pinkish-orange color with high thermal and electrical conductivity. with the addition of tina silvery-white metal, the chemical element of atomic number 50. and sometimes other metals such as aluminum or zinc.

Despite the beauty of its form and decoration, this vessela container such as a cup, bowl, pot, or dish. is most famous for its lengthy inscription of 187 characters. The text is one of the longest from the early Zhou(joe) period, around the eleventh to tenth centuries BCE. It is repeated inside the vessel and on the lid. The characters possess the decorative style of calligraphythe art of producing decorative handwriting with a pen or a brush.. It is likely that the text was first written with a brush and then transferred to the clay model used to make this bronzea mixture of copper, tin, and often lead that produces a strong metal.. According to the inscription, the vessel commemorates three days of administrative meetings and rituala set pattern of behavior for a religious or other kind of ceremony. ceremonies held in the capital during the reign of Zhao(j-ow), the fourth king of Zhou. The owner of the vessel was deeply involved in these ceremonies.

Shang dynastythe earliest Chinese dynasty verified by scholars, ruling from ca. 1600 to 1050 BCE. bronzes preserve one of the earliest forms of Chinese writing in their simple, highly pictographic inscriptions. In the succeeding Zhou(joe) dynastya series of rulers from a single family., written characters became more standardized and bronzea mixture of copper, tin, and often lead that produces a strong metal. inscriptions lengthened. They often commemorated an event in which the person commissioning the bronze was involved, as seen in this fangyi(fahng-ee) a square bronze vessel for holding wine.. Thus, besides their artistic and rituala set pattern of behavior for a religious or other kind of ceremony. values, Shang(shahng) and Zhou bronzes are often carriers of important cultural and historical information critical for us to rebuild the history of ancient China.