Metalwork plate depicting King Shapur II in the midst of a boar hunt.

As the museum’s manager of docent programs, I am comfortable leading in-person tours in our galleries. The museum’s closure due to the COVID-19 pandemic changed all that—not just for me, but for all our docents. Within weeks we began to train docents to lead tours online by using digital imagery and the Zoom platform. To encourage docents, I made the case that we examine artworks even more closely than we do when we are in the galleries. This became abundantly clear to me when I shared the museum’s famed Shapur plate with colleagues during an online tour session.

The plate depicts Sasanian King Shapur II, who, as a curator at the museum once wrote, is in the midst of a hunt as he “calmly aims his bow and arrow at the upper boar, showing his control over chaos. The lower boar is already dead.” I began to wonder how the artists who created the plate visually indicated that one boar had been slain. Obviously the position of Shapur, mounted directly above the lower boar, was one way to show this, but were there other visual cues?

I began to compare the dead boar with the living one. I noticed that the legs of the former were artfully splayed beneath it, as if one were looking from above at a recently expired animal. By comparison, the upper boar’s rear legs are arranged together, as if the animal is leaping. The legs resemble those of Shapur’s steed, whose rear legs are similarly paired.

The lower boar’s eye appears clouded, as if life has just departed. Both boars’ tongues extend beyond their mouths, but the upper boar’s opens more widely, as if gasping for air while fleeing its pursuer.

When I posed my question to colleagues during the online tour, they noted all of these clues, which I then expanded on. One colleague, however, noticed something I had never seen before. She observed that the shaft of an arrow, presumably shot by the king, was lodged in the dead boar’s right front haunch.

There is a moment of pride when a tour participant notices something the docent has never seen before. It means that as a tour leader, I have engaged a participant in close looking. In this case, my pleasure was mixed with slight embarrassment because despite many years of studying the Shapur Plate, I had never noticed an arrow.

I looked carefully and was genuinely convinced that the thin line extending from the gilded haunch seemed tipped with feathers representing an arrow that contributed to the boar’s demise. I then decided to consult an expert, the museum’s curator of the ancient Near East, Antonietta Catanzariti. Here is her response:

When Paul discussed the iconography of the plate with me, I pointed out that the composition followed imagery traditions that were familiar in the ancient Near East. An early representation of a lion hunt on a stele from Uruk, dated 3200 BCE and now at the Iraq Museum in Baghdad, illustrates a priest-king twice—once killing a lion with a spear and another time with an arrow. Perhaps the most popular representations of this type of iconography are the Neo-Assyrian period (645–640 BCE) royal hunt scenes from Nineveh’s North Palace in Iraq, where Ashurbanipal is depicted hunting lions (British Museum, 124874). The lions wounded by a spear or an arrow evoke pain, the blood gushing from their bodies (British Museum, 124855) or mouths (The Dying Lion, British Museum, 124864). Such scenes capture the attention of the viewer, who sympathizes with the animals’ pain. In the Shapur II plate, the arrow that pierced the boar’s body is concealed by the animal’s fur. Clearly, the focus of the plate is not the dying boar but Shapur II, who inspires power and decision with his composed posture. The message is clear: The king is the personification of order over chaos; he subdues the wild environment with his strength. This was a familiar message for the viewer in ancient times in the Near East, and this idea is still effectively communicated by the scene today.

Close scrutiny is key to provoking discussion about objects during Paul’s online tour sessions. With high-resolution images available online, the docents can now explore objects in more detail and notice elements that are sometimes difficult to see behind a vitrine. 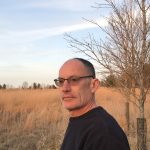 Paul Ruther is a long-time museum professional. He has been Manager, Docent Programs at the Freer Gallery of Art and the Arthur M. Sackler Memorial Gallery for seven years. After giving his first tour as a volunteer docent at the Hirshhorn Museum and Sculpture Garden a generation ago, Paul studied Art History, receiving his MA at the American University. Afterwards he held curatorial positions at the Smithsonian American Art Museum and at the Carnegie Institution of Washington, before becoming Manager of Teacher Programs at the Phillips Collection. After a career of teaching in the galleries, he never dreamed that he would be leading online tours, much less training others to lead tours from a tiny box on a computer screen.