Senior Scientist Blythe McCarthy, Curator Lee Glazer, and I are undertaking a technical examination and analysis of James McNeill Whistler’s watercolors, based on the fifty-two watercolor paintings—the largest number of Whistler watercolors in any one location—in our collection. This study involves visual analysis, art historical research, and scientific study using a number of analytical techniques. It will culminate in an exhibition of Whistler watercolors in 2018. Until then, here is a sneak peek of some of our findings thus far.

Hot or Not?
The most commonly used supports for watercolor painting in the nineteenth century were wove paper and paperboard. Whistler used both. In fact, while Whistler was quite innovative in his paper choices for etchings, he appears to have been much more traditional in those he used for watercolors.

His preferred papers were manufactured with textures that can change and enhance watercolor’s appearance. During the nineteenth century, these surfaces were sold with the following designations: hot press, cold press, and rough. “Hot press” refers to paper that has been run through hot rollers to impart a very smooth, flattened surface. “Cold press”—also called “not,” as in “not hot pressed”—has been run through cold rollers, which partially smooth the rough surface of the paper fibers. “Rough” indicates a paper that has only been air-dried, with no pressing of the surface to flatten or smooth it.

Below are photographs of three Whistler watercolors, taken through the microscope at five times magnification. Can you see the differences in the surface textures?

Sanding the Beach
Whistler used many of the techniques discussed in watercolor manuals of his day, including rewetting and blotting, rubbing and sanding. We found evidence of several techniques in the section of his painting Southend: The Pleasure Yacht highlighted below. First, Whistler painted a blue wash. He then sanded the paper, which removed the blue from the high spots but left the color in small depressions. Lastly, he painted another, drier wash of a sandy color, which sits on the high points of the paper. The fibers in this worked area appear rough and lifted.

Paper Source
Watermarks, as seen in modern currency, are thinner areas of the paper that look transparent when held up to a light. About half of Whistler’s watercolors are mounted to cardboard supports, so it’s nearly impossible to see if there are watermarks in the paper. Using computed digital X-radiography, though, we were able to read a watermark on one of our mounted watercolors. Though it’s difficult to see, the watermark revealed below reads: “J. Whatman/Turkey Mill/189?” It tells us that the paper was made by James Whatman, a preeminent British papermaker of the eighteenth century.

Outfit Change
We examined all of the watercolors using a technique called reflected infrared photography, which can enhance and reveal underdrawings and reworking. Using filters to block visible and ultraviolet light from entering the camera, we can generate an image of reflected infrared light. Carbon and other pigments absorb this light and appear darker than normal. The image below shows a change Whistler made while painting the skirt in his portrait of Milly Finch.

Want to know more? Read a past post on Whistler’s drawings, and stay tuned for more conservation insights as this project moves forward. 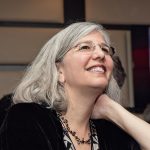 Emily Jacobson is the paper and photographs conservator in the Freer|Sackler’s Department of Conservation and Scientific Research.