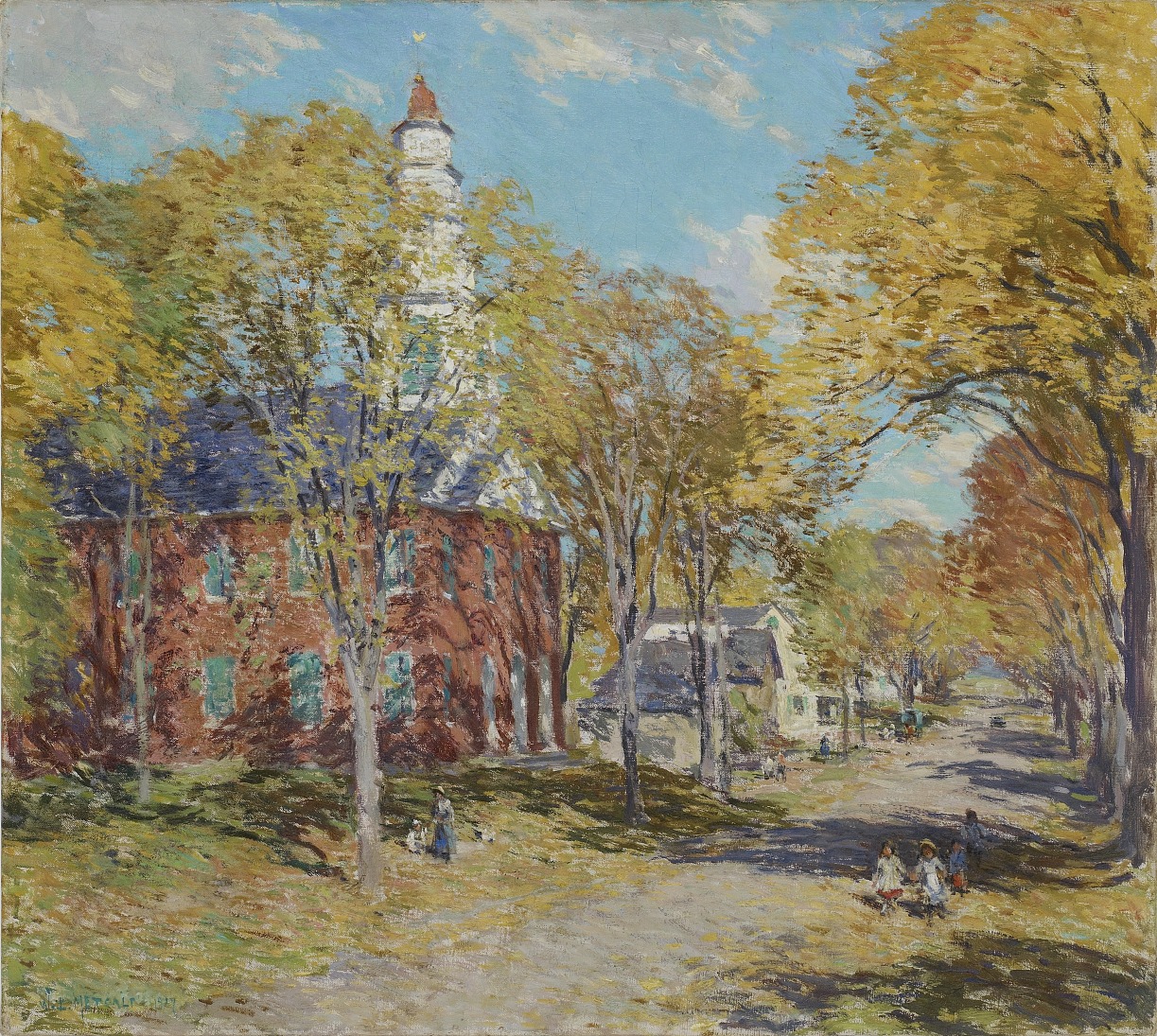 In 1906, Detroit businessman Charles Lang Freer (1854–1919) gave the United States his collection of Asian and American art, which he continued to develop until his death. Freer amassed his collection in a variety of ways: traveling to Asia to learn about and purchase works of art; buying from dealers, fellow collectors, and artists; and directly commissioning artists to produce objects expressly for his collection. In August 1917, Freer commissioned Willard Metcalf (1858–1925) to “create a little masterpiece of an autumnal landscape.” In July of the following year, Freer received Metcalf’s October Morning: Deerfield, Mass (1917).

Freer had purchased his first Metcalf painting, Blossom Time (1910), through the famed dealer M. Knoedler and Co. at the Panama-Pacific International Exposition in San Francisco on June 23, 1915. Two years later, in July 1917, Freer began to envision how the Metcalf canvas would hang in the Freer Gallery of Art, which architect Charles Platt was designing and building on the National Mall in Washington, DC.

Freer wrote to Metcalf to request “a second example of [his] work” featuring a “winter landscape [that] would be of much importance” for the new gallery. Undoubtedly pleased to know that his paintings would feature in Freer’s museum, Metcalf promptly supplied his patron with The White Pasture the following month. Around that time, Freer decided to commission a third painting from the artist, this time with an autumnal theme. Metcalf initially offered Freer Golden Screen (1906, location unknown), a painting that the Detroit Museum of Art was exhibiting; Freer rejected that piece, offering Metcalf a clear idea of what he envisioned for the work, writing on May 11, 1918:

Metcalf obliged his patron’s request; however, he did not produce a new painting. Instead, he offered October Morning: Deerfield, Mass, which he had produced the previous October. He wrote to Freer explaining that this painting was “the same size as the winter one and . . . succeed[s] in getting something of the glory of a brilliant day” and shipped it directly to Freer’s Michigan home. Freer approved of the painting and in July 1918, Freer paid Metcalf for his work and expressed his delight, noting that the painting

becomes more impressive with better acquaintance, and it reveals many elements  of deep appeal, and to me expresses both the body and spirit of beauty; and I am  much pleased to have the privilege of adding it to the collection that will  eventually be housed  in the appropriate home being constructed in Washington  under Mr. Platt’s direction.

Today, October Morning: Deerfield, Mass and the other two Metcalf paintings that complete the triptych that Freer envisioned are part of the Freer Gallery of Art’s world-class American collection, just as the museum’s founder planned.

Learn more by exploring the Willard Leroy Metcalf papers, 1876-1925 in the collection of the Smithsonian’s Archives of American Art.