Why is it so hard to tell the story behind an artwork or to convince others of our personal connection to it? Why do we often struggle to find the right words? In art history, we learn about art throughout time; we often hear about stylistic schools and the different techniques artists employed. When we read reviews of current artists and shows, the language can become so dense and convoluted, we can’t even visualize the work without an accompanying photo. Traditionally, many of us have been taught that art is treated in formal ways with only one “right way” to write and talk about it.

In February 2021, I began my virtual internship in the Marketing and Communications Department at the Freer and Sackler with social media specialist Sai Muddasani. In celebration of Women’s History Month in March, I drafted Instagram posts focused on Five Women who Changed the World, a series of five silkscreen prints by Oda Mayumi that each depict a historical and legendary woman whose impact on world history and mythology has been associated with their sexuality. The series includes Eve, Helen of Troy, Shinto deity Ama-no-Uzume, Cleopatra, and Chinese Imperial Consort Yang Guifei. I viewed the digital images of the prints and drafted a post for each with the help of Sai and Kit Brooks, The Japan Foundation Assistant Curator of Japanese Art. We shared an Instagram post each week on #WonderfulWomenWednesday highlighting one of the prints.

When I was assigned this project, I thought about creating a template, something where I could simply fill in the blanks with the pertinent data relevant to each female figure and then use that information to craft the social media posts. But as I delved deeper into the life of each woman, I soon realized that I could not simply fill in the blanks with their histories. None of the facts or myths told me who they were as women or as people. There was nothing to tell me why Oda Mayumi felt compelled to use a certain technique, at a specific time in her life. Nothing told me why I was drawn to the series and why the print of Yang Guifei resonated with me the most. I was simply compelled by it: to connect with it, to look at it in wonder, and to yearn to share Yang’s story.

A common trope in Chinese history is the tale of a beautiful woman who brings about the downfall of heroic men and great empires. The tragic love story of Imperial Consort Yang Guifei is a definitive example. Known as one of the four most beautiful women of ancient China, Yang Guifei was originally a maid at the Imperial Palace. From these humble origins, she eventually gained the title Guifei—roughly translating to mean a “first class Imperial concubine”—after capturing the attention of Emperor Xuanzong.

Born Yang Yu Han, at age fourteen Yang Guifei was married to Prince Li Mao. However, her life as the Princess of Shou did not last long. Her father-in-law, the Emperor Xuanzong, began to desire Yang after the death of his favorite wife, despite her marriage to his son and the age gap of thirty-four years between them. For her divorce from the prince to be publicly accepted, Emperor Xuanzong forced Yang to take up residence as a nun in a Taoist temple to purify and cleanse her of her past married life.

Then, she was officially made Yang Guifei, embarking on her new life as favored companion to the emperor. Yang used her relationship with the emperor to bestow favor on her family, even having her family members appointed to nobility. Mounting discontent among the people toward this favoritism grew until Emperor Xuanzong was forced to flee the capital. Eventually, Xuanzong’s affection for Yang compromised his ability to rule, and his aides revolted. Xuanzong put Yang to death to save his reign. Even after her death, Yang’s spirit was accused of distracting Emperor Xuanzong from his duties protecting the Empire.

For centuries, the story of Yang Guifei has inspired cultures around the world. The great Tang poet Bai Juyi (772–846) composed an epic poem called the “Song of Everlasting Sorrow,” a heavily romanticized version of the relationship between Yang and Emperor Xuanzong. The poem describes the Emperor’s love for Yang and his perpetual grief over her loss. The poem became an instant classic, gaining popularity in Japan and serving as a main source of inspiration for Japanese literature, drama, and art during the Heian period (794–1185).

One of the most important literary accomplishments of the Heian period, the novel The Tale of Genji by Murasaki Shikibu, incorporated many references from the “Song of Everlasting Sorrow.” The first chapter recounts the tragic romance between the fictional Emperor Kiritsubo and the concubine Lady Kiritsubo, similar to Yang and Emperor Xuanzong’s relationship.

In Oda Mayumi’s depiction of Yang, the symbols of femininity and empowerment are clear: the crescent moon in the distance, a pair of phoenixes suggesting the conjugal pairing of Yang and Xuanzong, and the graceful willow tree with drooping limbs reminding us of Yang’s tragic death. While Yang Guifei is often credited with powerful attributes such as divine prophecy, she—like other powerful women—is both derided and revered. Oda’s silkscreen technique produces a layering effect that allows for a slow and deep engagement with her work. When we look at Oda’s series, we see women from different cultures, each embodying a unique set of characteristics. From love to motherhood to the arts, these powerful icons of femininity have transcended time and place and continue to inspire contemporary audiences. Oda’s authentic, accessible, and approachable vision of Yang invites us to follow her gaze as she looks off into the distance and to think beyond the frame.

So here I am, wrapping up my blog post about my inexplicable bond with Oda’s print of Yang Guifei. Perhaps I formed an attachment with this particular print because Yang became a part of my world during the pandemic, when I was forced to interact with art in an isolated environment. As humans, we’re hardwired to seek out connections and naturally, we’re attracted to art that offers them to us. For me, this connection came unexpectedly through Yang, whose story inspired and energized me, creating an unexpected bond that I will not soon forget. 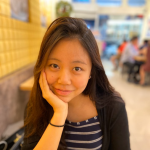 Jinnie Yoo interned with the social media specialist in the Marketing and Communications Department at the Freer and Sackler Galleries in the spring of 2021. She will graduate from Dickinson College with a BA in art history and international business & management in May 2022.