The Teen Council spends time with Buddhist art on display in the Freer|Sackler.

What does Buddhist practice look like today in the Washington, DC, area? Two short documentaries made by the Freer|Sackler Teen Council with support from DC Asian Pacific American Film highlight two nearby Buddhist temples to consider this question. Sana Mirza, internship coordinator, and Matthew Lasnoski, youth and family programs manager, interviewed the Teen Council members about their filmmaking experience. The answers below are compiled from the teens’ responses.

How were you inspired by the museums’ collections of Buddhist art—in particular, the objects on display in the exhibition Encountering the Buddha?

The perspective that the museums’ collections provided was instrumental in deepening our understanding of Buddhist practice. For some of us, Teen Council was our first extensive exposure to Buddhism and its traditions. By carefully considering this context, we created films that are—we hope—both respectful of the religion and interesting to a general audience. While the subject and format of our films differed from the Buddhist art on display, we tried our best to showcase the religious significance exemplified by each intricate artifact. We also hoped to present a complex perspective on Buddhism, one that shows it as current and close to home as well as a part of history.

Within Encountering the Buddha, there is a short film about contemporary Buddhist practice in Sri Lanka called The Texture of Practice: Sri Lanka’s Great Stupa. It was an especially important source of inspiration as we researched and planned for our documentaries. The film is transporting in its tranquility. In our own work, we all aimed to capture similarly scenic cinematography so viewers could understand the transformative experience of Buddhist practice. Though there were no monumental stupas at either location we filmed at, we found other sources of beauty: statues, candles, snowfall. The community members we interviewed spoke of self-reflection in an ever-changing world. We found beauty in the individuality of each story.

What was it like working with your mentors from DC Asian Pacific American Film?

Without the generosity of our APA film mentors, these films would not exist. They not only provided equipment, diction lessons, and delicious food (seriously, ask Judy for her lychee cake recipe), but they also demonstrated dedication to their craft. When we made mistakes like not lighting an interview correctly, they quickly and gently corrected us. Thanks to their expertise, we felt confident. The mentors’ warmth in welcoming us into their family and film festival also encouraged us to make our work as good as possible, so we could live up to their high standards.

What was it like to film at the temples?

Ekoji Buddhist Temple is a community of warm and welcoming people who guided us through our exploration of their temple. Several members of the congregation also guided us during our filmmaking process, and the beauty of the place itself inspired much of our documentary. The temple has a deep cultural history that we wouldn’t have known without talking to its friendly members.

Everyone at Kunzang Palyul Choling was incredibly kind and welcoming as well. Some members of the temple had worked in film, so they provided advice and patiently watched us work through sound issues during interviews. As at Ekoji, a range of practitioners (our interviewees) provided insight into the history and culture of their temple. They told so many stories; we unfortunately had to cut some from the film. One story that almost everyone we interviewed mentioned was how, after Hurricane Katrina, American lama Jetsunma Ahkon Lhamo told her followers to go to New Orleans and rescue dogs and cats from the catastrophe. Their kindness really touched us.

What’s the most important thing you gained or learned from this experience?

Through our experiences working with the temples, we gained a lot of perspective on how people assign meaning to their lives. Also, the process of working within our groups and combining our personal opinions with the overall vision for our projects taught us a lot about collaborating in a creative, professional setting. We all walked away having learned more about everything from different Buddhist schools in the DMV area to communicating wordlessly behind a camera.

How did this experience change your relationship to the museums and to Buddhist art and practice?

Prior to our interaction with Buddhist communities around DC, it was easy for us to perceive Buddhist artworks in museums as artifacts of the past rather than as meaningful to a large community today. The process of creating our films truly brought Buddhist practice to the present for us, and it brought tangible meaning to what objects in Encountering the Buddha represent.

What do you hope to do next with your new film skills?

In the future, many of us aspire to make more documentaries exploring different subjects. These could range from interview-based to experimental films, depending on individual interests. Although not all of us will pursue filmmaking in the future, this was an invaluable experience in that it opened our eyes to a possible new career path. Good diction is a useful skill to have! 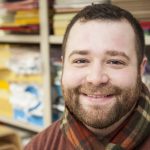 Matthew Lasnoski is the Educator in Youth and Family Programs at the Freer|Sackler.