While the Freer is under renovation, its famed Peacock Room is closed. We continue to explore it in Peacock Room REMIX, however, as well as in our Peacock Room app, the Story of the Beautiful web feature, Google Art Project, and on Bento. Below, Clive Lloyd, a retired professor and blogger in Norwich, England, writes about the contributions of architect Thomas Jeckyll, who designed the original dining room that Whistler made into his masterpiece.

The Peacock Room may be stunningly beautiful, but my eye is drawn to the contents of the fireplace, where I see the sunflower andirons designed by Thomas Jeckyll (1827–1881), born just outside my home city of Norwich, England. As a pioneer of the Anglo-Japanese Aesthetic Movement and chief designer for a local ironworks, Jeckyll introduced Japanese motifs—such as sunflowers, cherry blossoms, and fan shapes—to their products. Similar to the larger freestanding sunflowers that form the Peacock Room’s andirons, the bloom appears in various forms embossed on domestic fireplaces. Since writing an article for my blog on these sunflowers, several people have contacted me to say they have an Aesthetic fireplace identical to the one I illustrated.

I have been fascinated with this motif since I read about the seventy-two sunflowers forming the railings around a Chinese pagoda that once stood in my local park. Jeckyll designed the pagoda for the 1876 Philadelphia Centennial Exhibition; he would later adapt the sunflowers for the Peacock Room’s rather more ostentatious versions. The Norwich Corporation purchased the pagoda in 1880 and placed it in Chapelfield Gardens. The structure suffered damage from bombing during World War II and was dismantled in 1949, but the best of its sunflowers were refurbished and used first as railings, then later as gates, at another Norwich park.

During the most recent refurbishment, a local photographer told me she had seen original and replacement sunflowers mixed in boxes in the city council’s works department. Imagine my excitement when I saw a solitary sunflower in the corner of a nearby architectural salvage yard. I realized it must have been a surplus item liberated during the last restoration. I hoped the owner was unaware of exactly what he had, but no luck: He mentioned the magic name of Jeckyll (and the price), and I went home disappointed. 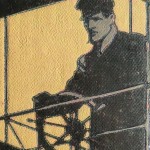