In ancient Egypt, amulets were seen as magical objects imbued with powers. They could ward off evil, protect people from animal attacks and other dangers, or prevent physical issues, such as illness and infertility. As portable objects that could be attached to clothing or used in the home, amulets were a popular way to harness the protective nature of the gods.

Ancient Egyptians combined aspects of various creatures, both real and mythological, in their depictions of protective deities. For example, the goddess Taweret—a domestic deity associated with motherhood—is composed of a lion’s legs, a crocodile’s tail, and a hippopotamus’s head and body. Because they ferociously defend their young, hippopotami were represented in protective emblems. Taweret’s rounded belly and enlarged breasts also visually connect her with fertility. Amulets depicting the goddess Taweret therefore were often worn by pregnant women, mothers, and young children as a way of harnessing hippos’ maternal nature. Images of Taweret also were present during births, either as amulets or carved on household items and furniture.

As an intern at the Freer|Sackler this summer, I explored the museums’ holdings of Egyptian art using the digitized collections, Open F|S. I noticed a group of amulets featuring Taweret, and I wanted to learn more about them. My mentor, Curator of South and Southeast Asian Art Debra Diamond, encouraged me to request a viewing, and before I knew it, I was in storage with the amulets laid out before me. Being able to hold these incredible works of art and study them up close showed me aspects I could not understand through photos alone. Some of the amulets were larger or much heavier than I had expected, while others had levels of detail that I had not seen before. I noticed that the textures of their surfaces varied, even when they were made of the same material. In fact, the amulets were made from several different materials, which suggests they belonged to people of various social classes. While the wealthier members of ancient Egyptian society could afford finely carved amulets embellished with gold or gems, the lower classes often had more roughly rendered ceramics.

Amulets were typically threaded onto string and worn as necklaces to keep their magical, protective qualities close. During my initial image-based research, I couldn’t see how the amulets would have been attached as jewelry. Examining them in person, however, I discovered that most have suspension loops through which to pass the thread.

Seeing the amulets up close allowed me to perceive small details and appreciate their size, mass, and material in new ways. More broadly, it transformed my understanding of the function and context of ancient Egyptian art. 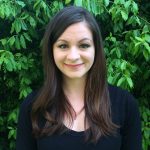 Courtney Marx was a Curatorial Department intern at the Freer|Sackler in summer 2018.