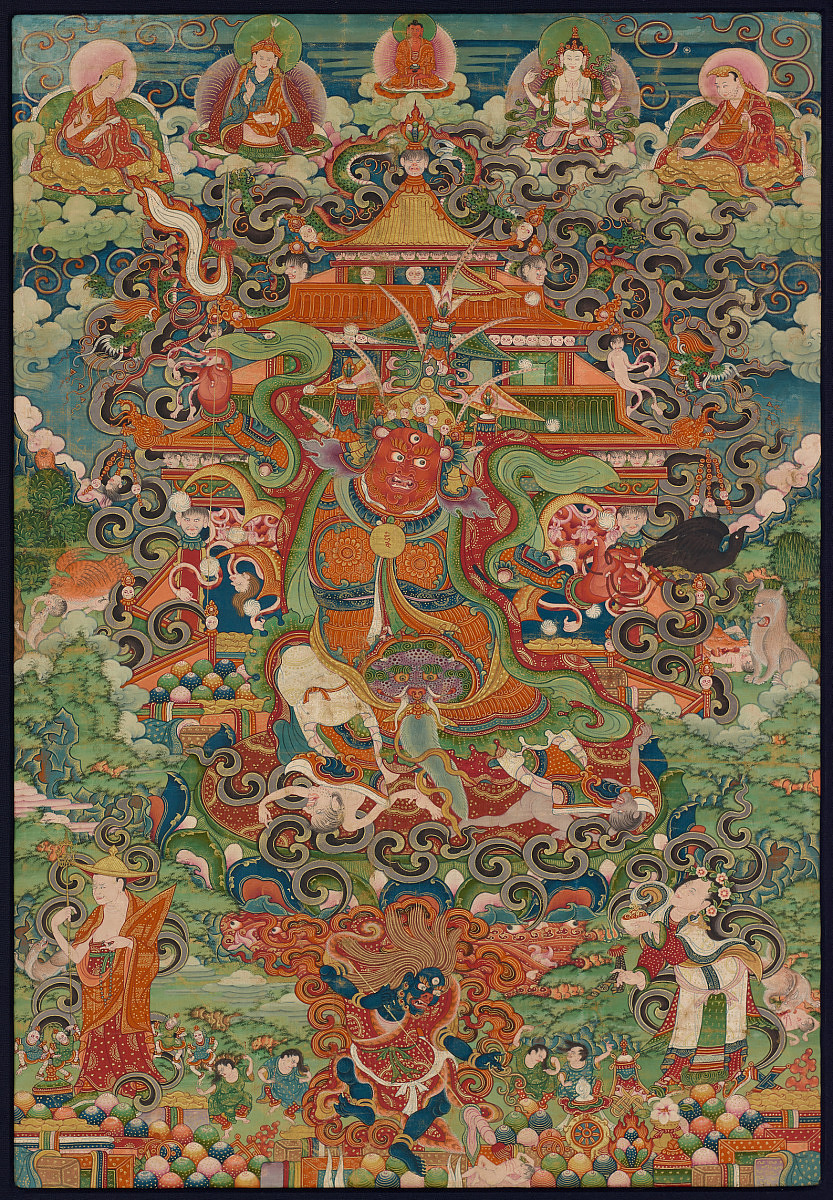 Medium
Ink, colors and gold on ground on cotton support

[3] As per Donna Strahan, David Brown was a Harvard educated lawyer specializing in maritime law in the firm of Copper, Brown & Behrle, 331 Madison Ave, New York, New York. Mr. Brown bought the thangka at auction from Sotheby's New York in 2007.

Representing an unusual deity within the Tibetan Buddhist canon, this thangka is filled with dynamic energy that successfully combines the gruesome imagery of Himalayan wrathful beings with delicate details. Robust forms gracefully arch and swoop. Garments, hair, and ornaments respond to bodily movement. We can almost hear the beat of a drum and the deity's open-mouthed roar.

Mortuary iconography--ranging from images of terrifying deities and cremation grounds to objects made from human remains--permeates the visual and material culture of Tibetan Buddhism. Offerings of body parts, including severed heads and flayed skins, symbolize selfless generosity. Deities with a ferocious appearance, called wrathful or protector gods, appear in Tibetan Buddhist art surrounded by such gruesome imagery. Ferocious as they may appear, they are understood to act out of great compassion for all beings. They protect the Buddhist dharma in body, speech, and mind. Peaceful figures--often shown overhead--serve as reminders that the central deity's wrath is meant to destroy the attachments that cause human suffering.

Energetically painted, the wrathful protector deity at the thangka's center opens his mouth in a battle cry. Standing atop two flayed corpses, lunging dynamically, and wearing full body armor, he stretches open his arms, clutching a staff with a sword to cut through ignorance in his right hand, and a lasso to harness the senses in his left. The spotted face of a makara (mythical water animal) appears on the front of his armor. Curlicues of silver-gray smoke, entwined with the serpentine bodies of flame-spewing dragons, surround him, emanating from his inner energy and coiling around the palatial structure behind him. The deity's body seems to emerge from the palace, which is adorned with rows of severed heads and skulls and topped with a golden roof, makara finials, and more severed heads.

The thangka's visual power can be attributed to its composition as well as its details. The aureole of smoke and palace around the deity create a dynamic oval, which itself emanates upward and expands from a dancing goddess surrounded by red flames. The blue-black goddess dressed in red, her arms outstretched, leads her human and skeletal companions in a wild dance. The artist has placed her figure atop heaps of offerings--egg-shaped jewels, sacred texts, symbols, and other offerings to the deity. A similar gathering of offerings also appears inside the palace, along with playfully gruesome imagery, such as eyeballs falling out of severed heads, floating flayed skins, and jackals contemplating their skeletal prey.

In the painting's upper register, on an embankment of clouds are teachers and peaceful Buddhist figures, including the Buddha Amitabha (at center, red and holding a begging bowl), flanked by Padmasambhava (left) and white Shadakshari Avalokiteshvara (right), and two lamas whose yellow hats identify them as belonging to the Gelug school of Tibetan Buddhism. 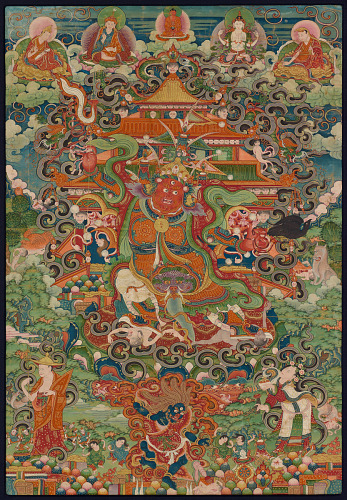