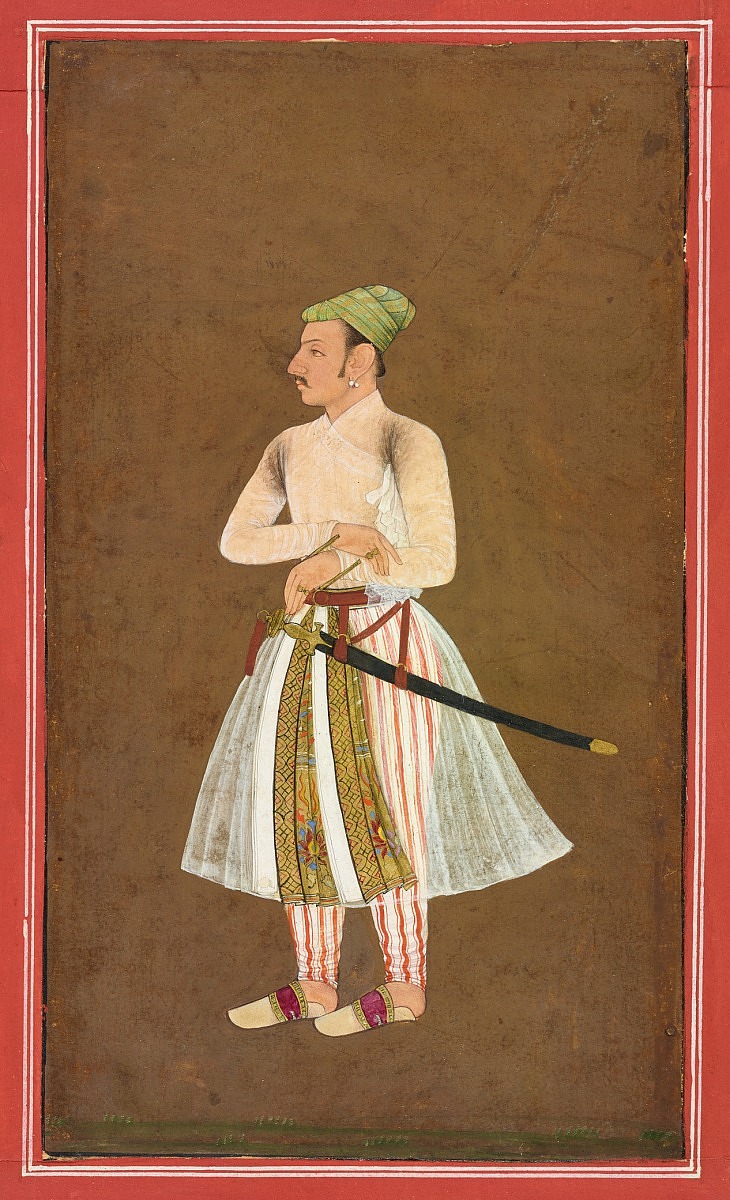 The subject stands facing left against a brown background wearing a green turban, orange and white striped pants and a diaphanous jama. His gold patka is long and decorated with floral sprays.

From 1977 to 2001
Ralph Benkaim, Beverly Hills, California, purchased from Chhote Bharany in Los Angeles in October 1977

From 2001 to 2008
Catherine Glynn Benkaim, Beverly Hills, California, by inheritance from Ralph Benkaim after his death in 2001

[1] According to Catherine Glynn Benkaim, 6.14.16, the Raja of Bikaner began selling off his collection in the 1960s. He sold a large group of paintings to Kevin Delahanty, an Englishman, and many paintings to Edwin Binney III (1925 - 1986). He also sold paintings to the Delhi-based dealer Chhote Bharany, who deposited a cache of paintings in the United States around 1969 and sold them off over years, as per Gurshuran Sidhu.

[2] Bharany took all of his paintings out of India before the Emergency (most probably in 1969) and kept them with William Wolff in New York. This painting was likely in the cache of Bharany paintings kept at the William Wolff gallery. According to conversation with Gurshuran Sidhu. Ralph Benkaim purchased the painting from Chhote Bharany in 1977. All of the Benkaim Bharany paintings were purchased in the United States, as per conversation with Catherine Glynn Benkaim between May 23 and 24, 2016.

The subject stands facing left against a brown background wearing a green turban, orange and white striped pants and a diaphanous jama. His gold patka is long and decorated with floral sprays.

Personal seal of the Maharaja of Bikaner, dated August 19, 1964.

This sensitive portrait of a Rajput nobleman can be attributed to a painter from Bikaner. The naturalistic style, the subject's posture, clothing and attributes, and the intimate scale of the painting are indebted to imperial courtier portraits of the first half of the seventeenth-century.

Standing and facing left against a chocolate brown ground, the nobleman is splendidly dressed. His green turban, striped churidar pants, woven gold sash (patka) and diaphanous muslin robe (jama) are made from luxury textiles. A warrior in the service of the empire, he rests his right hand on the golden hilt of a katar (punch dagger) and a long sword hangs from his belt.

The portrait demonstrates an important stage in the development of Rajput portraiture. Rajputs adopted the genre of portraiture from the Mughal court, where they were represented as courtiers. According to Steven Kossak, the style and finish of Bikaner paintings during the reign of Maharaja Karan Singh (r. 1632 - 69), strongly suggests that painters trained in the Mughal atelier joined the Bikaner workshop.[1]  The subtlety of expression and finesse of this painting indicate that it was likely made by a painter from the imperial workshop who had shifted to Bikaner. 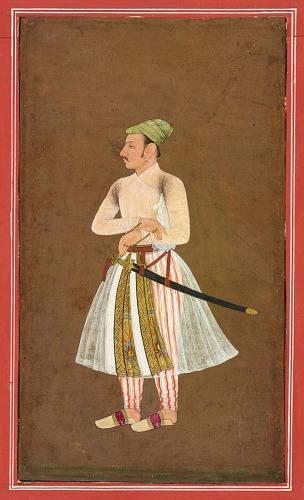