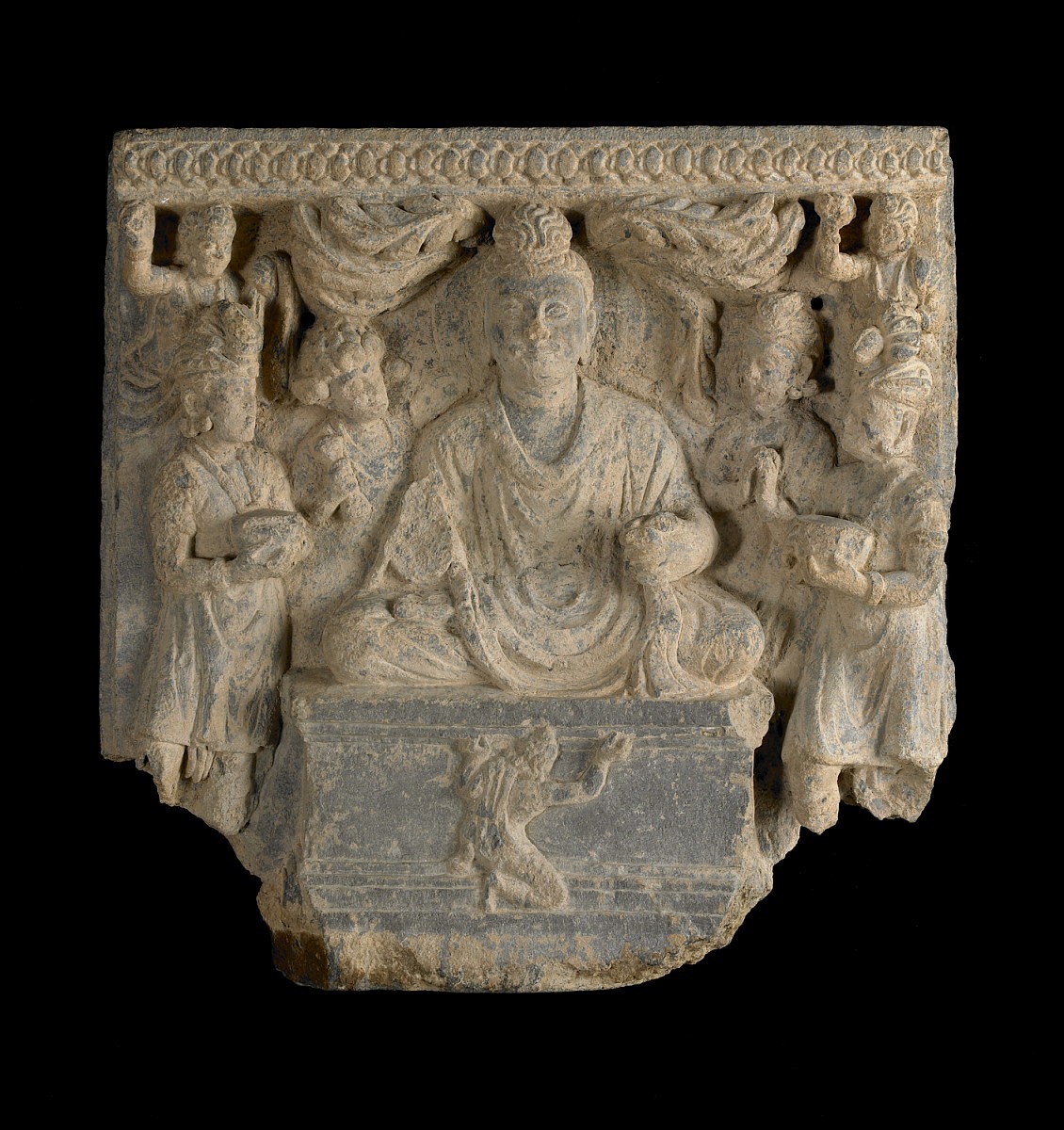 From 2000
Arthur M. Sackler Gallery, given by Manuel and Fanchon Silberstein in 2000

It was only in the first century C.E., five hundred years after the death of the historical Buddha, that artists began to produce anthropomorphic images of the Buddha. The shift from symbolic to figurative representation of the Buddha occured in the culturally syncretic Kushan empire (1st-3rd century). The empire, which extended from the Oxus (AmuDary'a) river in Central Asia to the Gangetic plains as fars as Varanasi, encompassed diverse populations with different religious and artistic traditions. The politically astute Kushan emperors accomodated these populations by producing coinage featuring Iranian, Greek, Hindu, and Buddhist deities with inscriptions in Greek, Sanskrit, and Kharoshti. Similarly, the Buddha images produced within the empire responded to local aesthetic traditions. While artists working in the southern capitol around Mathura employed a style continuous with pre-Kushan Indian sculpture, artists in the northern capitol of Gandhara drew upon the Indo-Greco aesthetic heritage of Bactria to visualize the iconography articulated in Buddhist texts and oral traditions from northern India.

This fine stone relief from the Gandharan region represents the Buddha honored by two turbanned male figures carrying bowls, an adoring figure seen from the waist up, and two flying gandharvas (semi-divine beings) bearing garlands. Seated beneath a tree, the Buddha grasps the hem of his monastic robe with his right hand; the left hand, now missing, was raised in the abhyana (have no fear) gesture. Characteristic of the Buddha image that developed within the Gandharan region are the heavy topknot that disguises the ushnisha (the cranial bump that is one of the signs of the Buddha's superhuman perfection); the mustaches, the robe that drapes from both shoulders in heavy folds and terminates, in seated images, with a dipping semicircular hem. The rather stylized tree under which the Buddha sits derives from the acanthus leaf motifs employed in classical art, but may here represent the Bodhi tree.

This relief is notable for its vitality. The plastically carved drapery of the devotee figures form a lively counterpoint to the symmetrical composition and the devotee fiure to the Buddha's left fairly springs out from the relief's ground. In this regard, it is worthy to observe the prostrating figure in front of the Buddha's throne. Although his supplicationg posture is somewhat awkward, the artist has taken care to animate the devotee by depicting his ascent up the stairs at the throne's base. 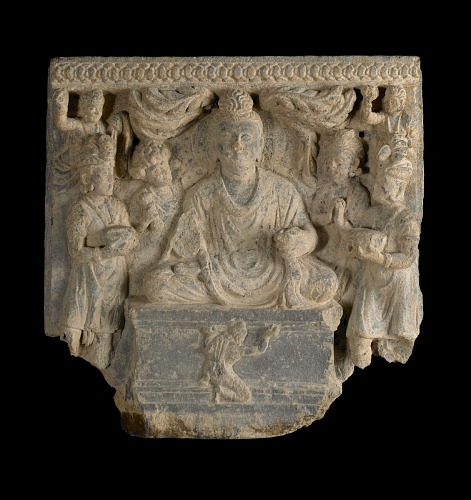