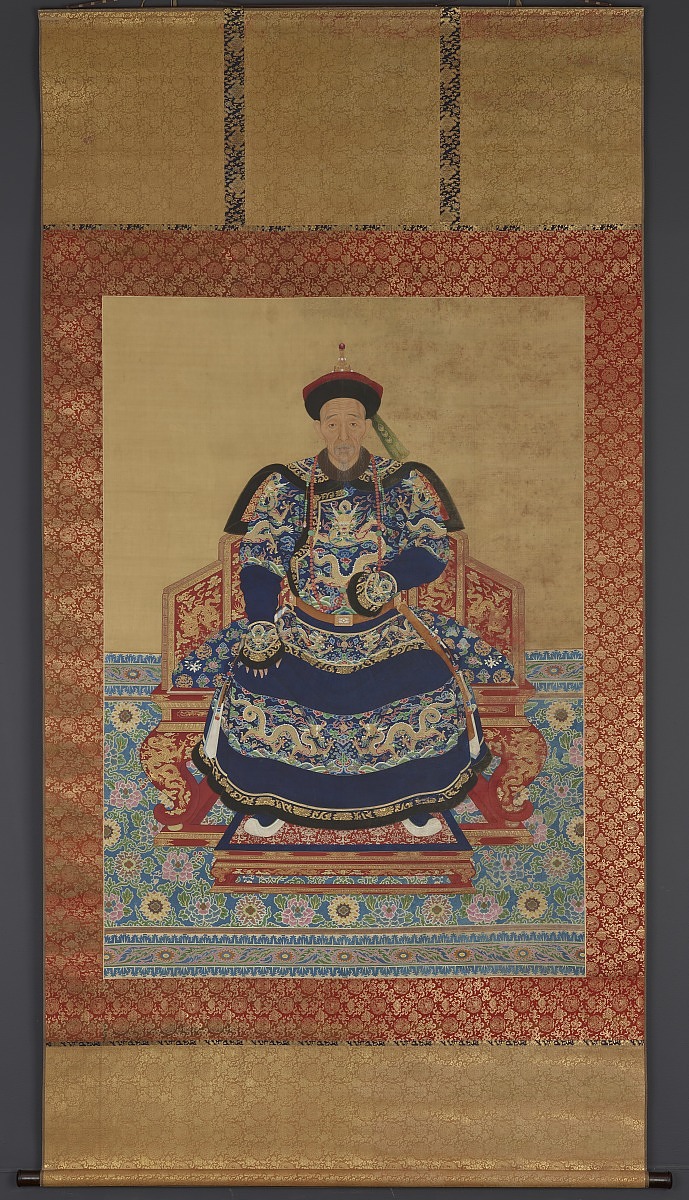 Medium
Ink and colors on silk

ca.1949 to 1959
Wu Ping-Chung (dates unknown and Chinese characters for the name unknown) inherited ownership upon Wu Laixi's death around 1949 [2]

From 1991
The Arthur M. Sackler Gallery acquired through partial gift and partial purchase from Richard G. Pritzlaff in 1991 [6]

[1] Wu Laixi 吳賴熙 (alternate romanization: Wu Lai-hsi) was an antiquities dealer who often sold high-quality, imperial goods sourced from impecunious Chinese nobles, among other sources. Active in the 1930s and 1940s, Wu Laixi purchased portraits in China, reportedly for his personal collection and for resale; he took great pride in his collection, labeling himself as the first collector of Chinese ancestor portraits.

In 1937, Wu sold portraits to the American, Richard G. Pritzlaff, who was visiting China. Pritzlaff and Wu remained in touch. In the 1940s, Wu worried about his financial security and the fate of his collection in China, where war with Japan and domestic turmoil threatened the security of private art collections. Wu wrote to Pritzlaff, asking if he could send portraits in exchange for money to survive. Between 1940 and 1948, Wu sent three shipments of portraits and other art objects to Pritzlaff's ranch in New Mexico. Wu intended for Pritzlaff to sell the majority of the art objects he sent, however, Pritzlaff did not want to disperse the collection, so he sent as much money as he could to Wu and retained the art. Pritzlaff reported that he "thought of himself as the owner of some paintings but wanted to be only a temporary custodian of others" and intended for Wu to one day collect the entire collection. It remains unclear which portraits Pritzlaff believed he owned. See letters from Wu Laixi to Pritzlaff, September 4, 1940; June 27, 1941; June 17, 1947; and August 6, 1948, copies in accession file.

[6] For the deed of gift and purchase arrangement, see accession file.

The size of this scroll and its ornate red-gold brocade mounting well complement the sumptuousness of the elaborate furnishings. Boggodo's high cheekbones were signs of great authority in traditional Chinese conventions governing physiognomy (the reading of facial features). His rather meek expression contrasts with the magnificence of the setting, but the calm demeanor is typical of ancestor portraits. It may also be an accurate reflection of the man, who was not active in official life. Perhaps this was just as well, given the tumultuous court politics of his day.

Boggodo wears a winter chaofu, the court's formal attire, and the three-eyed peacock feather adorning his hat signifies high imperial favor. The emperor could award members of the court the right to wear a peacock feather with one, two, or three eyes, with three being the most prestigious. 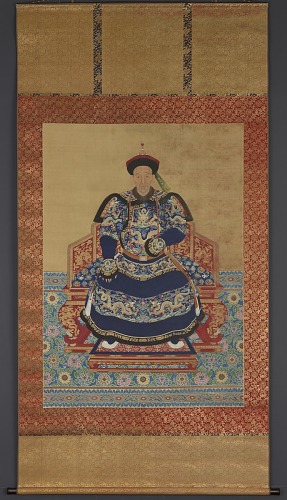