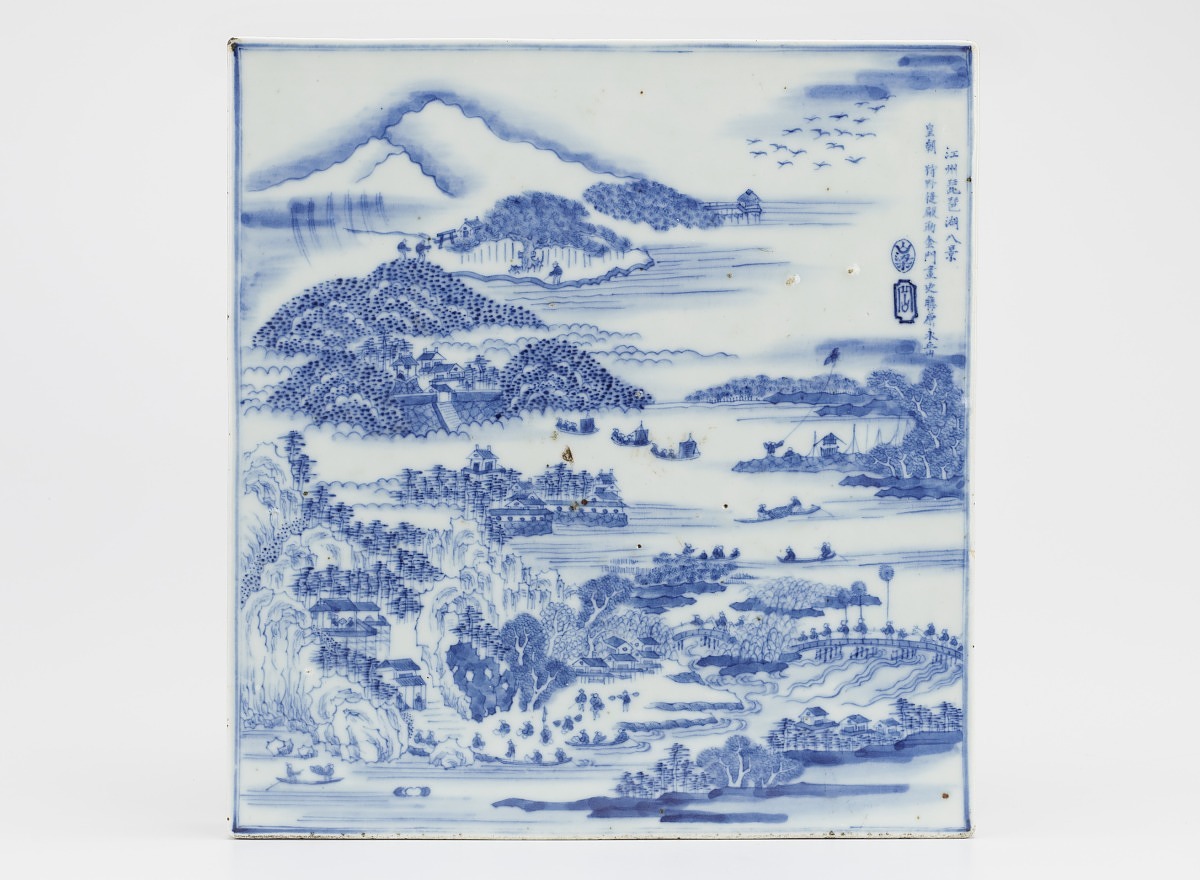 Porcelain tile made at the Tao Zhen workshop in Jingdezhen to Japanese order, painted by a Chinese artist following a sketch commissioned from Kyoto Kano school painter Eigaku (1790-1867). The subject is Eight Views of Omi, the Japanese reinterpretation of the Eight Views of the Xiao and Xiang rivers.

Porcelain tile made at the Tao Zhen workshop in Jingdezhen to Japanese order, painted by a Chinese artist following a sketch commissioned from Kyoto Kano school painter Eigaku (1790-1867). The subject is Eight Views of Omi, the Japanese reinterpretation of the Eight Views of the Xiao and Xiang rivers.

This tile is a geographic and cultural hybrid in almost every possible aspect of its design, materials, and function. It embodies China's enduring significance as the premier cultural model in Japan by literally blending the two cultures in this single object.

In function, the thick, square tile is intended as a support for a charcoal brazier and kettle used for the preparation of Ming-style steeped tea (in Japan, known as sencha). This manner of tea drinking was introduced to Japan in the late seventeenth century and espoused by literati circles as an alternative to the codification of powdered tea preparation (chanoyu), which glorified Song-dynasty paintings and ceramic utensils. Sencha practitioners preferred the fresh variety of Ming- and Qing-dynasty objects.

The tile was made at a commercial workshop in Jingdezhen, China, as one of fifteen identical tiles commissioned by a Japanese man, Hashimoto Kagetome, from Settsu province (Hyogo prefecture). This detailed information appears in a round cartouche on the back of the tile, surrounded by surging waves. Kagetome's name indicates that he was a warrior and his identification of himself as a Buddhist layman that he had retired from head of his family. His ordering of the tiles suggests that he was devoting himself to sencha.

Fittingly, the underdrawing was provided by an artist of the Kano school, which drew upon Ming dynasty painting styles and became the official source of paintings for the elite warrior class of the Edo period (1603-1868). Kano Eigaku (1790--1867), whose name appears on this painting, was the official painter for the Ii daimyo house based in Hikone, near Lake Biwa. As rendered in the Jingdezhen workshop by a skilled painter trained in Qing-dynasty modalities, the Eight Views of Omi takes on a pronounced Chinese flavor. The tile's four narrow sides display poems evoking the Eight Views of Omi theme composed by Soboku, a senior monk of the Shōkokuji Zen monastery in Kyoto.

The tile bears a date expressed as a cyclical year of the Rooster (like 2017), which can be confirmed as Jiaqing 18, or 1813. This tile relates to other porcelain objects--serving dishes, trays--also commissioned from Japan at Jingdezhen workshops in the late eighteenth and early nineteenth centuries. 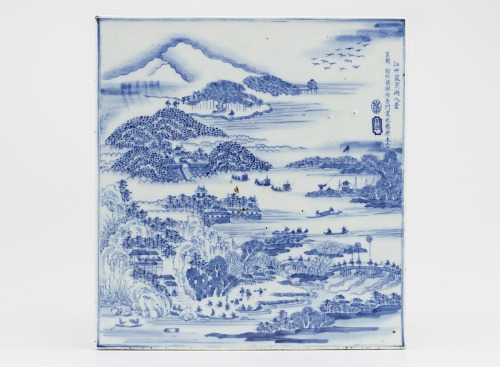