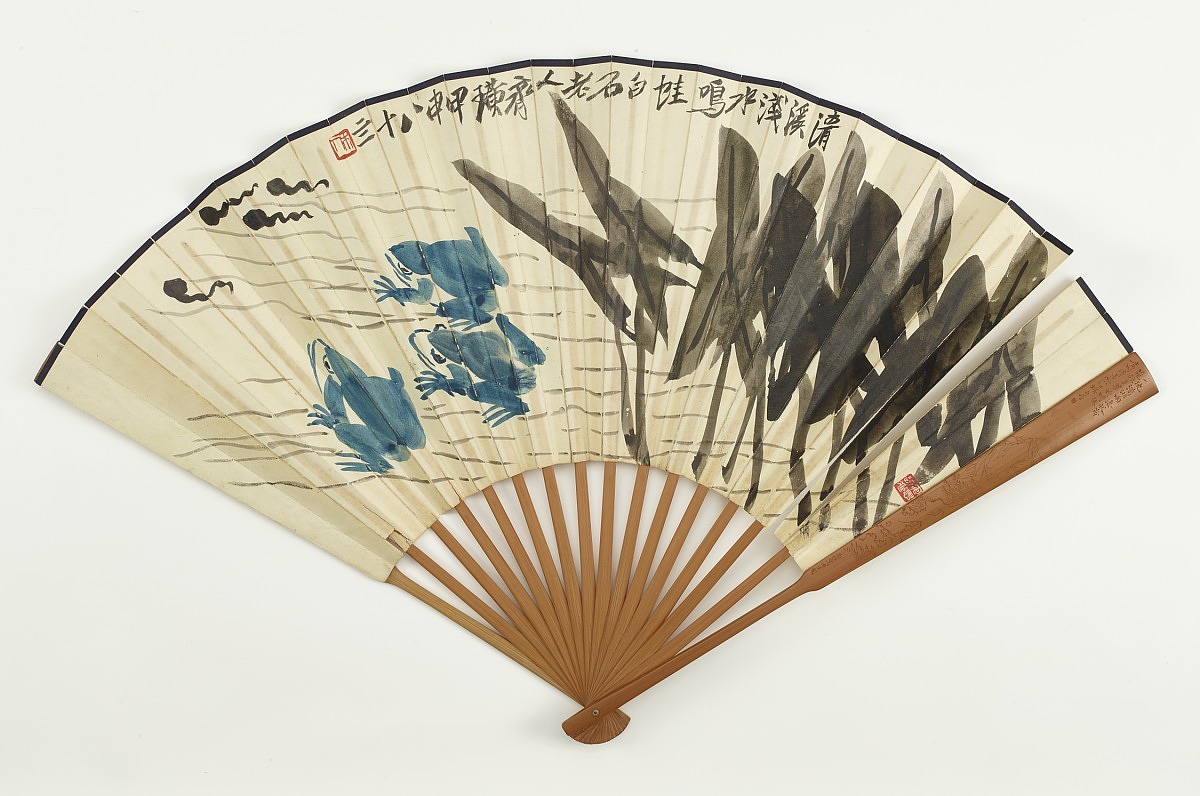 Medium
Ink and color on paper mounted to wooden frame

[1] According to the Acquisition Justification, Mr. Ellsworth was in the possession of this fan from at least 1997-8 when this fan was first considered for acquisition, but at that time Mr. Ellsworth chose to retain this fan for his collection; it remained in his home until his death. See Curatorial Remark 1 in the object record.

Qi Baishi created an original and entirely unique style of painting: simple and plain; direct and honest, even naïve; almost careless, or rather carefree; with undeniable appeal to a modern sensibility. Equally adept at landscapes, figures, and floral and botanical subjects, he addressed a broad range of subject matter with freshness and spontaneity. Since his early years, Qi also had a special fondness for small creatures, which he sometimes depicted singly but usually in groups: shrimp, crabs, insects, fish, birds, and mice--but not many frogs, and even fewer tadpoles. However, by the late 1930s and into the 1950s, which is to say from Qi Baishi's mid-seventies on, the amphibian and its young begin to feature regularly in his thematic repertoire, both separately and together. Paintings of tadpoles are often associated with a wish for numerous progeny; but here Qi seems to have something different in mind.

Across the top of the painting, the artist wrote the following in standard script: "Frogs sing in the shallow waters of a clear creek. Old Man Baishi Qi Huang, jiashen [1944], eighty-four." From this we know that Qi painted the fan in Japanese-occupied Beijing during the war. As with other rustic imagery in works from Qi's late years, the theme here also may reflect an aging man's nostalgia for his old home in the watery Hunan countryside and a simpler less encumbered time.

Thoughts of faraway people and places also inspired Qi Baishi's choice of poems for the opposite side of the fan, which he wrote in a fluid, easy running script. He started with characters in single columns that fit the folds of the fan, then switched suddenly after beginning the second poem to smaller characters in double columns to make the text fit the available space. Both poems are well-known quatrains by Tang dynasty poets, Yang Juyuan (755--832?) and Li Qi (690--751), respectively, and both poems were composed with the intention of sending them to absent friends. Qi Baishi did not date the text, but he probably created it around the same time as the painting (1944). 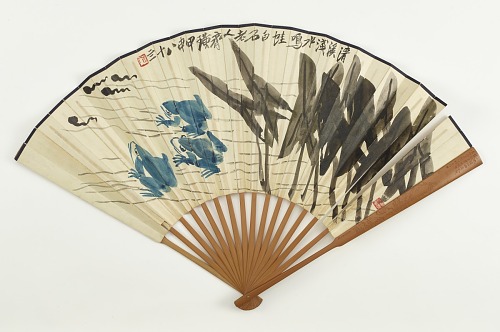