Dish with copper-red glaze, and a Xuande mark in cobalt oxide on the base - Smithsonian's National Museum of Asian Art 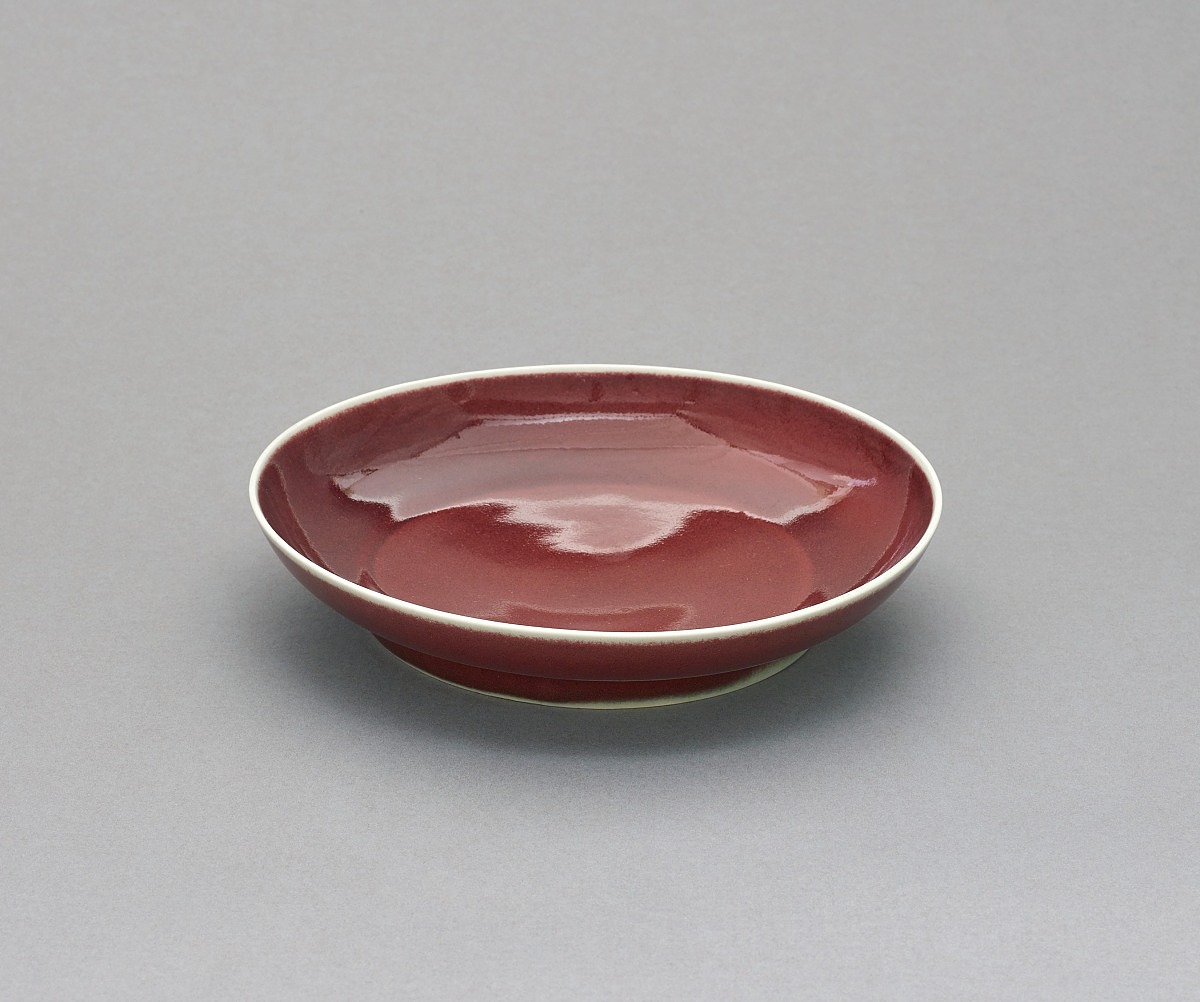 Chinese monochrome porcelains are among the greatest achievements in world ceramics, and no color is more sought-after or admired than the luscious copper-red glaze of the early fifteenth century, especially of the Xuande reign. Although imitated later, it was never again realized. During the short period when this glaze was perfected, the imperial court presided over a populous, cosmopolitan state actively engaged in global trade and overseas exploration. From their position of wealth and power, the Yongle (1403–1424) and Xuande emperors projected an image of splendor at court, dazzling foreign emissaries and Chinese officials alike, and porcelain played an important role in the aura of imperial resplendence. The superb, difficult-to-accomplish red of this dish demonstrates the exacting standards and extent of imperial control that reached from the capital in Beijing to the far-away kilns in Jingdezhen, where the dish was produced.

The triumph of Xuande copper-red-glaze lies in the combination of color and texture—raspberry (some call it—cherry) red, thick and velvety. The tactile quality of the surface is created by millions of trapped bubbles in the glaze that suffuse it with tiny speckles and subtle irregularities in color. Some minute pitting from burst bubbles creates the typical early 15th century "orange peel" surface. A white band around the rim, where the glaze ran thin and the copper volatilized, exposing the white porcelain body, enhances the deepness of the red. The glaze also stops short of the foot, showing the white body, but here the transparent glaze has a typical, slightly green tinge. On the base, a six-character reign mark written in the style of the court calligrapher Shen Du (1357-1434) appears in a double circle executed in cobalt oxide under the glaze, firing to a sapphire blue.

This remarkable red is usually called jihong you (祭紅釉), which can be translated as "sacrificial" or "ceremonial" red glaze, because it was used for altar vessels. It is also known as "fresh/bright red" (xianhong).

Only a few dozen examples of fifteenth-century copper-red porcelains exist worldwide, in the form of shallow dishes (of two sizes, of which this is the larger), deep bowls, stem cups, water pots, ewers and the occasional meiping bottle. The complexity in using difficult-to-control copper severely limited the number of successful firings; off-color fragments excavated from the early Ming imperial kiln site record many failed attempts. That red should be just right may be attributed to the twofold significance of the color. The ruling family’s surname, Zhu, refers to a red hue, tying the color to imperial identity. More directly applicable to this dish, red was the color of the sun, and copper-red-glazed vessels were employed in ceremonies at the Altar of the Sun (Chaoritan), one of the four main imperial altars. It was a Ming innovation to use porcelain in the form of bowls, dishes, and ewers to replace the complex, archaic shapes of bronze and metal vessels previously used on state altars.

Production of this high-temperature red glaze is extremely challenging and was pursued consistently beginning only in the fourteenth century, reaching a breakthrough in the Xuande period. The colorant is finely ground copper oxide mixed into the glaze. During firing, reduction of the copper ions to colloidal copper metal and phase separation in the glaze produced a complex network of reddish and yellowish glasses to create the mottled effect. Scientific analysis shows differences in the percentage of copper (and occasional additions of other metal oxides) even within the short period of the first half of the 15th century when the glaze was attempted, and suggests considerable tweaking and experimentation devoted to producing this rich red.

Changes also occurred to the base glaze: adding slightly more calcium facilitated the escape of bubbles and dissolving of batch material that otherwise veiled the red. The percentage of copper was reduced to about half of one per cent (of which possibly half volatilized and disappeared during firing). With too little copper, the color was pale; with too much, it became livery. Some small kilns at the imperial site are now thought possibly to have been dedicated to the red wares, which required slight over firing for success and so could not be mixed easily with other types of wares.

Extensive scientific analysis since 1985 is bringing scholars close to understanding how Xuande copper-red glaze was achieved, but it still retains a touch of mystery, not least of all in imagining how potters in the early fifteenth century were able to control so expertly the many challenges and complexities of its production. The remarkable beauty of this copper-red dish inspires us to reflect on China’s place as world leader in the art of porcelain. 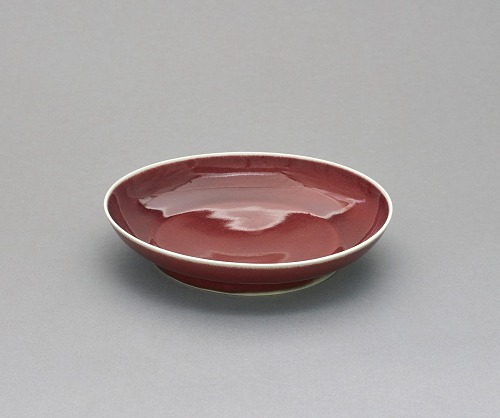