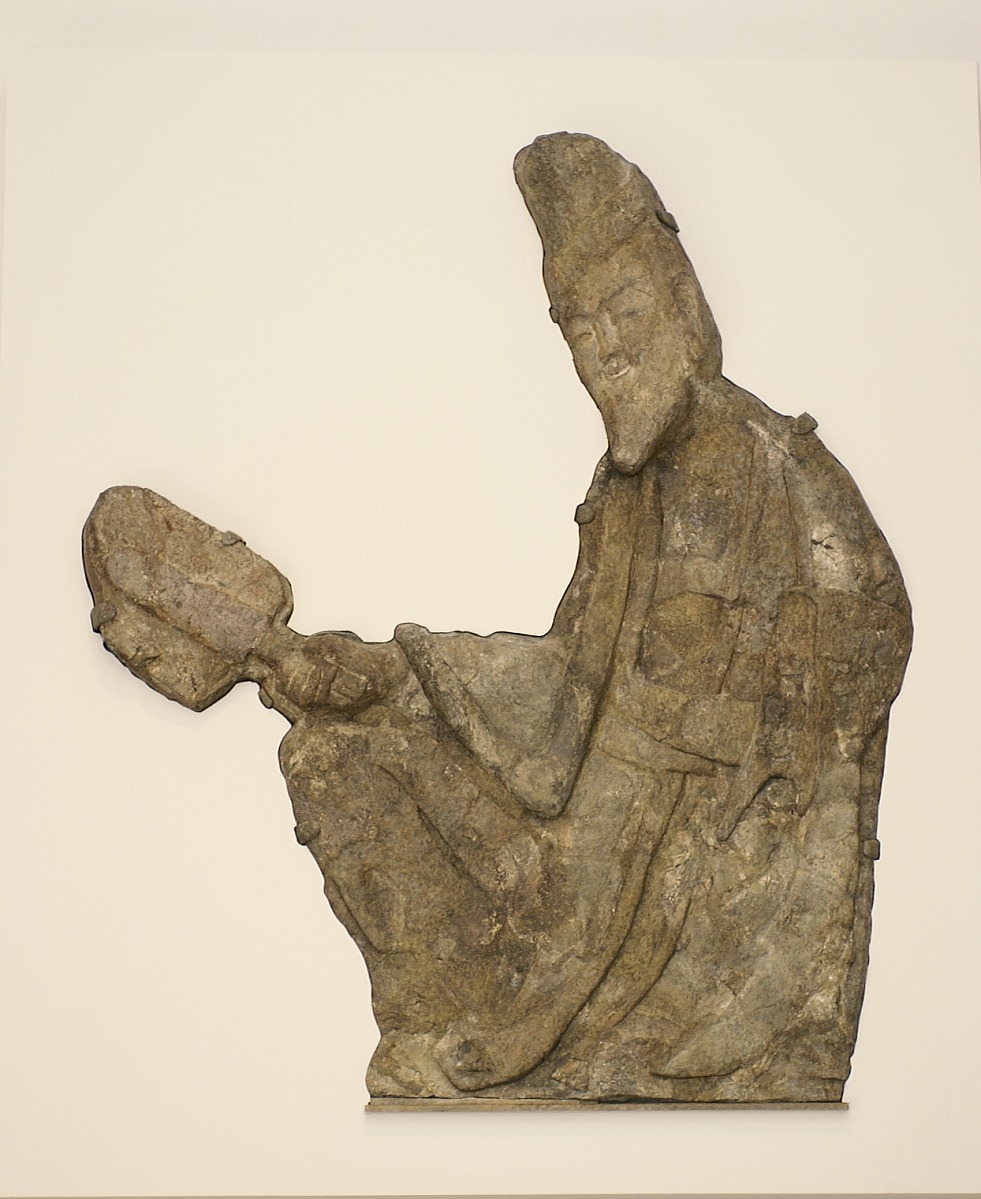 [1] The Vimalakirti was documented in situ in a black and white photograph published in 1920 by Friedrich Perzyński, a German expeditionary, author, collector and dealer who travelled to China to visit Buddhists cave temples in 1912/1913. See Friedrich Perzyński, "Von Chinas Göttern: Reisen in China" (Munich, Kurt Wolff Verlag, 1920), pl. 27, opposite p. 104. Tokiwa Daijō, a pioneering Japanese scholar of Chinese Buddhist history and his collaborator Sekino Tadashi surveyed Buddhist monuments in China in seven expeditions between 1906 and 1925, which resulted in the multivolume publication "Shina bukkyō shiseki hyōkai," issued between 1925 and 1931 (English edition issued in 1926-1938). In volume II of the publication, Daijō provided a textual reference to the Vimalakirti sculpture. The subsequent study by the two authors, entitled "Shina bunka shiseki," published in 1939-1940, contained a black and white photograph of the Vimalakirti in its original location. See Tokiwa Daijō, "Chūgoku bunka shiseki" vol. II (Kyoto: Hōzōkan, 1975-76, reprint), pl. 13. In their study of the Longmen temples published in 1941, Mizuno Seiichi and Naghiro Toshio noted extensive damage to the Binyang cave, which occurred in 1935. By the time of their visit to the site in April 1936, the Vimalakirti sculpture had been removed, and the authors were able to reproduce it only in a reconstructive line drawing, see Mizuno Seiichi and Naghiro Toshio, "Kanan Rakuyō Ryuūmon sekkutsu no kenkyū" (Tokyo: Zauho kankokai, 1941), fig. 18.

[2] According to an account provided by Mathias Komor, Otto Burchard acquired the Vimalakirti from three Chinese dealers who had recently arrived in Beijing and brought with them the fragmented sculpture. The transaction took place in Komor’s house located in the Beijing Legation Quarter in the late 1930s. M. Komor to Pauline B. Falk, May 5, 1984, in object file. In the late 1920s and then from 1932 to 1946, Burchard resided in Beijing, where he established a reputation as a well-connected art dealer. Burchard, who had a close relationship with Laurence Sickman of the Nelson Atkins Museum in Kansas City, shipped the sculpture to Kansas for the museum’s acquisition consideration around June of 1939, see letter from Laurence Sickman to Mr. Nichols, June 9, 1939, copy in object file.

[4] The object was part of a sale on June 14, 1944; see Notice of Sale, issued by James E. Markham, Alien Property Custodian on June 14, 1944. The confiscated property was offered for a public sale and an invitation for sealed bids was issued in Notice of Sale cited above. A detailed inventory of properties offered for sale provided a description of the Vimalakirti sculpture under lot 53, in records of the Office of Alien Property, Record group 131, National Archives, College Park, MD, copy in object file. See also advertisement of the sale in New York Times (June 18, 1944), p. 34, copy in object file.

[5] See receipt issued to Myron S. Falk, Jr. and letter from H.D. Weiser, Supervisor Liquidation Section, Alien Property Custodian to Myron S. Falk, Jr., August 14, 1944. See also Bill of Sale, dated September 25, 1944, copies in object file. The sculpture was shipped from the Nelson Atkins Museum to New York in September 1944. After it had been restored in New York, it was lent to the Metropolitan Museum of Art and displayed there from August 28, 1945 to October 1946.

[6] The Freer Gallery of Art received the bequest on June 28, 2001 from the executors of Pauline B. Falk’s estate, see signed receipt and release document, copy in object file.

This massive, early sixth-century figure was originally situated high overhead in the Binyang cave at the Longmen Grottoes, a famous Buddhist cave-temple complex built under imperial sponsorship in north China. The Binyang cave features huge sculptures of Buddhas crafted in a conservative and statically formal style as well as more naturalistic, relaxed bas-relief figures with sweeping drapery, including this image that portrays the supremely wise Buddhist layman Vimalakirti (known as Weimo in Chinese). A famous Buddhist sutra recounts a debate between the bodhisattva (enlightened being) of wisdom, Manjusri (Wenshu in Chinese) and Vimalakirti, who exhibited stunningly profound knowledge of Buddhist dharma, or truth. He holds a fanlike whisk; in ancient China this signified involvement in intellectual discourse.

Vimalakirti's reclining pose reflects the setting of the debate, which was described as held from his sick bed. The figure's now-missing left arm (propped on a cushion) is still visible at Longmen. This sculpture was removed from China in the 1930s and arrived in the United States in numerous pieces that were reassembled; losses were filled with replacement materials. Despite its damaged condition, including erosion of pigment that once covered the surface, this figure is still awe-inspiring and offers testimony to the grandeur of the Longmen Grottoes created for Buddhist worship. 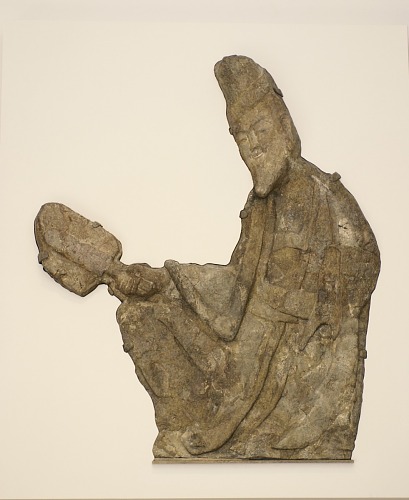