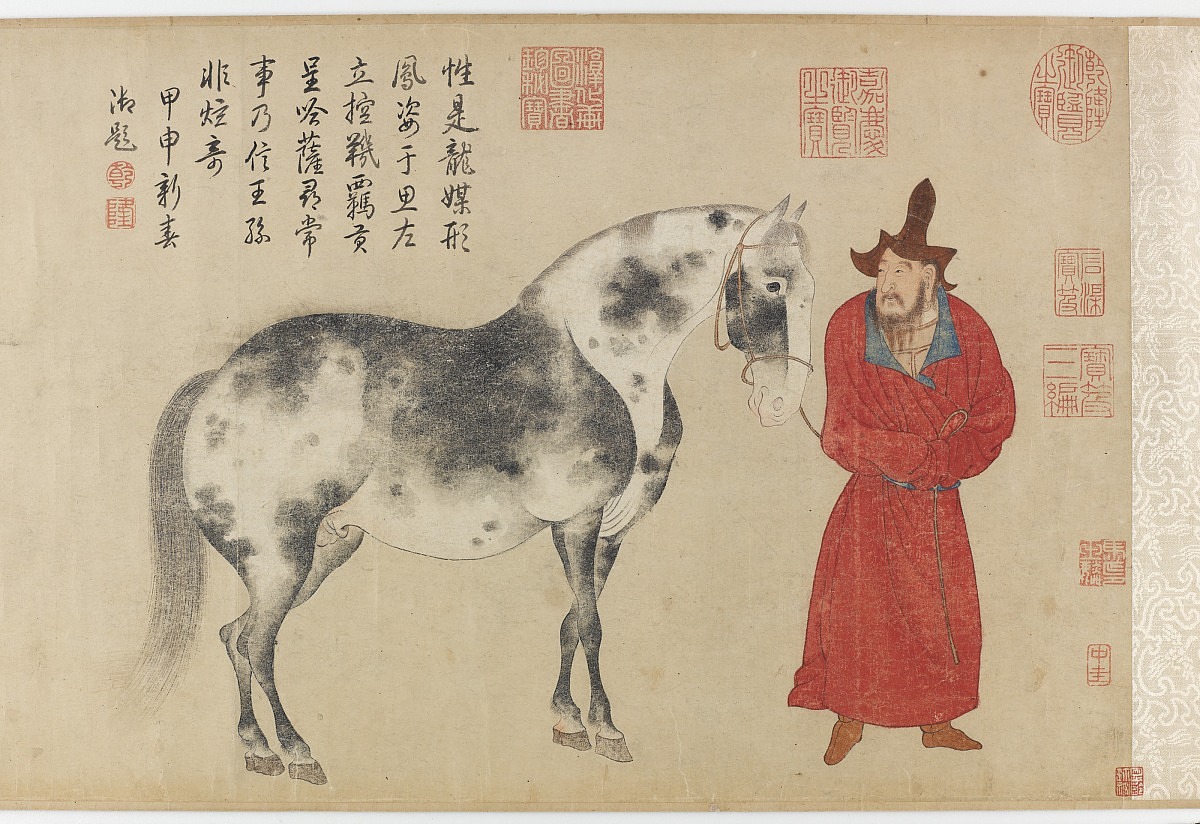 [1] The frontispiece is inscribed and signed by the Qianlong emperor and has three imperial seals. The painting bears an inscription with the Qianlong emperor’s poem, his signature and the date corresponding with February 2-March 2, 1764, accompanied by one imperial seal. Additionally, twelve Qianlong emperor’s collector seals are located on the painting. See documentation for the painting in “Song and Yuan Dynasty Painting and Calligraphy”, http://www.asia.si.edu/SongYuan/F1945.32/F1945-32.Documentation.pdf. Six pre-Qianlong collector seals remain unidentified.

[2] The Jiaqing emperor’s three collector seals are located on the painting. One of the Jiaqing seals indicates that the painting is included in the third installment of the imperial catalogue, the Shiqu baoji sanbian, compiled during Jiaqing emperor’s reign in 1816. The painting also bears two seals referring to the Chunhuaxuan, (Belvedere of Pure Development), a hall the emperor constructed in 1770 on the grounds of the summer palace at Yuanmingyuan. Presumably, the painting was moved to this hall shortly after its construction and was kept there for the remainder of Qianlong’s life. The painting may have been one of the objects from the imperial collections that entered the Beijing art market after the destruction of the palace by the British and French forces in October 1860, see “Song and Yuan Dynasty Painting and Calligraphy,” cited in note 1. Two post-Jiaqing collector seals remain unidentified.

[3] Zuo’an (studio name) is the author of an inscription on the outside label slip. It is not known whether Zuo’an was the owner of the scroll or only a hired calligrapher. The inscription includes the date, which corresponds probably with January 20-February 17, 1882, see “Song and Yuan Dynasty Painting and Calligraphy,” cited in note 1.

[4] According to information in Gao Shixian, Zhao Zhongmu “Lin Li Boshi Renma juan” (Shanghai: Zhonghua shuju, ca. 1930?). Li was a landscape painter and an author of an anthology of poetry by painters of the Qing dynasty, Qing huajia shishi (1930).

[5] See C. T. Loo’s stockcard no. 65067: “Scroll painting on paper in colors. Man in a red coat standing by a black horse. Followed by an appreciation by the Emperor Ch’ien Lung by Chao Yung – YUAN,” C. T. Loo & Frank Caro Archive, Musée Guimet, Paris, copy in object file. A note on the stockcard indicates that the painting could have been inventoried as early as 1936. In December 1938, the painting was sent to the Freer Gallery and was returned by the end of that month. Between 1939 and 1944, the painting was offered to a number of private collectors and galleries in United States, Paris, and London. Loo loaned it to an exhibition at the Vassar College Art Gallery in 1940, see Chinese Painting: Seventy-Fifth Anniversary Exhibition (Poughkeepsie, May 22-June 10, 1940), cat. 22, pl. IVB. In January 1944, the painting was shipped to the Freer Gallery.

Born into an artistic family, Zhao Yong was the second son of Zhao Mengfu (1254-1322), the most famous artist of the Yuan dynasty (1279-1368). In this short handscroll, Zhao copied his composition directly from the first image of the famous "Five Horses" handscroll by the eminent Northern Song (960-1127) scholar-official painter Li Gonglin (ca. 1041-1106), one of the most influential painters of horses in the Chinese tradition. While Li typically employed monochrome ink line drawing to render his subjects, Zhao Yong carefully shaded the body of the horse with ink wash and painted the groom's robe with a bright red pigment.

About four hundred years later during the Qing dynasty (1644-1911), the Qianlong emperor (reigned 1735-96), who owned the scroll, inscribed the frontispiece to the painting's right with four large characters in running script that read, "I love its divine nobility."


To learn more about this and similar objects, visit http://www.asia.si.edu/SongYuan/default.asp Song and Yuan Dynasty Painting and Calligraphy. 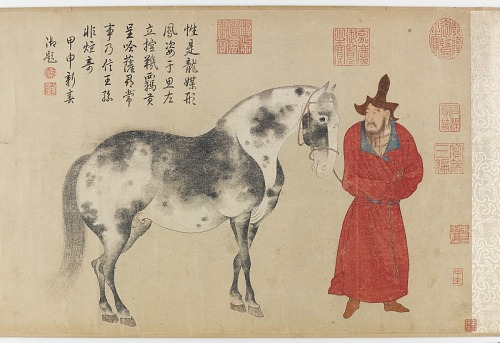