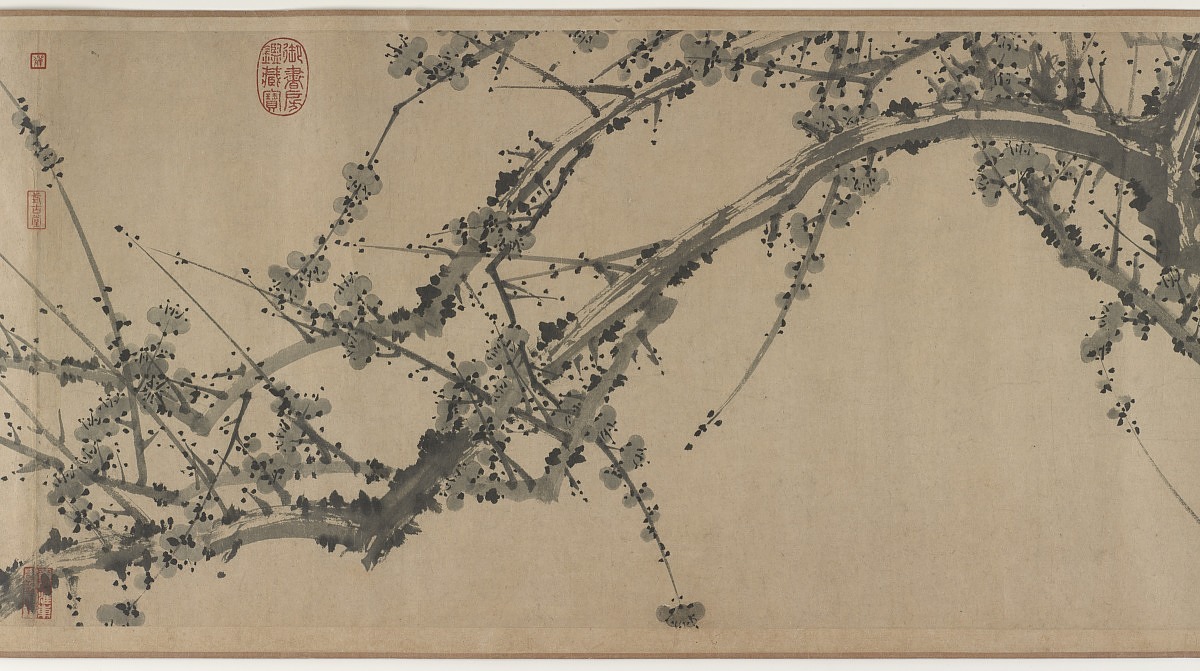 Executed entirely in varying shades of ink, an undulating branch of blossoming plum sweeps gracefully across the paper and culminates dramatically in a single long tapering stroke. The subtle chromatic range of contrasting ink tones, the rich calligraphic variation of the brushwork, and the expressive lyrical flow of the overall composition mark this unique painting as a virtuoso performance of the highest technical and artistic merit.

No other work by Zou Fulei survives or is recorded in any text, and nothing about him is known except for the documentation contained on the painting itself and in the attached colophons written by his two friends. In addition to his being an accomplished painter, these sources indicate that Zou Fulei was a follower of esoteric Daoism, a complex system of beliefs in which individuals sought to achieve physical immortality by means of various alchemical practices. Together with his older brother Fuyuan, also a painter, he apparently lived in a Daoist monastery or retreat called the Cinnabar Chamber of the Cavern Mystery, located in the eastern part of Hesha District in Songjiang County (in the vicinity of modern Shanghai). Bearing an appellation well-suited to a humble recluse living in austere circumstances, Zou Fulei's own residence or studio was named the Tumbleweed Shack, where he devoted himself to the typical introspective pursuits of  a gentleman scholar living in retirement, such as playing the zither (qin), reading and writing, and painting.

Zou Fulei is particularly noted for his ink plum paintings and is credited with reviving the calligraphic style of applying ink directly to the painting surface without sketching or outlines, a method pioneered by the Buddhist monk Huaguang (or Zhongren, died 1123), who one night spontaneously copied the shadows of a blossoming plum branch cast by the moon onto the paper windows of his cell. Associating himself directly with the Huaguang tradition, Zou Fulei added the following poem written in balanced columns of running script at the left end of his painting:

In this tumbleweed shack, where can I seek spring's return?
I charge the chilly toad to keep the old plum company.
As laments of mist subside, my empty room grows cold,
Traces of ink preserve the shadows that come to my window.

The "chilly toad" mentioned in line two is a conventional poetic reference to the moon, where such a creature was believed to dwell, while lines three and four identify Zou as a latter-day Huaguang, using ink to copy the shadows of moonlit plum branches. Blending direct description and archetypal association, Zou Fulei subtly amplifes the natural affinity he feels for the subject of his painting: blossoming in obscurity under adverse conditions, fragile yet resilient, the plum tree and humble recluse are essentially the same, steadfastly maintaining their pristine integrity.

A smaller line of text after the poem indicates that Zou painted A Breath of Spring in "early autumn of the gengzi year in the Zhizheng reign period," that is, between August 12 and September 10, 1360. This is followed by two of Zou's personal seals, one of which contains the name of his Tumbleweed Shack studio. In the upper right corner of the painting, Zou also placed a rectangular seal reading, Chun xiaoxi (A Breath of Spring), a phrase that in turn was borrowed by his friend and neighbor Yang Yu as the text of his frontispiece.

Borrowing the rhymes of Zou Fulei's poem at the left end of the painting, the Qianlong emperor (reigned 1735-95) composed a matching quatrain, which he wrote here in his characteristic style of running script:

In a single breath, the springtime goes but must return,
But who has conveyed these tidings to the chilly plum?
The Immortal of Budding Pearls envied Lady Nuyi's art,
And purposely came stealing in before the eastern wind.

The emperor's verse has none of the personal flavor that imbues his model. Instead, he suggests that the plum tree blossoms early because a certain minor divinity, enviously seeking to outdo Lady Nuyi, the goddess of spring who rules over all flowering plants, has stimulated it to bud before the springtime arrives. Although undated here, the poem is published in the second collection of Qianlong's literary works, which indicates that it was composed in late November 1748, when the emperor probably inscribed it on Zou Fulei's painting. In addition to the poem, the emperor had eight of his collector seals affixed along the upper length of the painting. Qianlong's son and successor, the Jiaqing emperor (reigned 1796-1820), also added his own square imperial seal directly above his father's inscription. 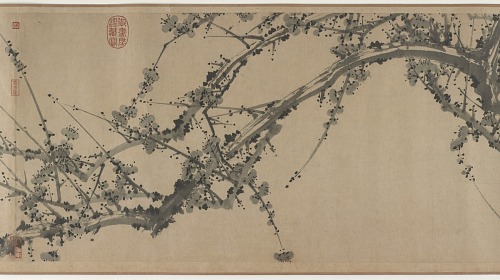