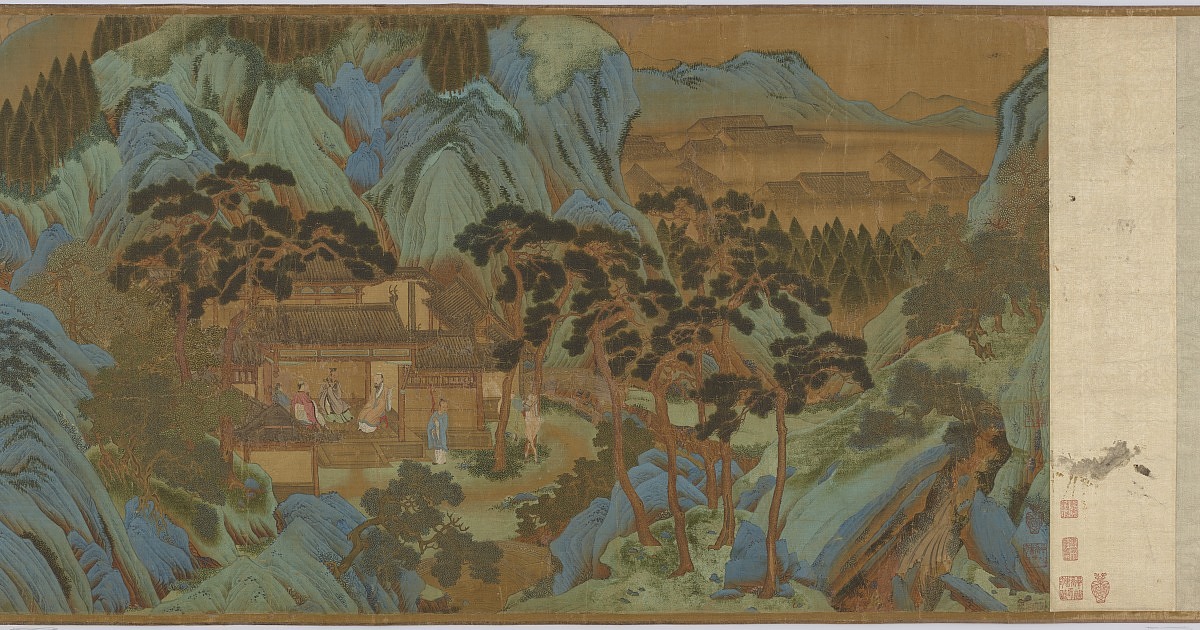 Outside his capital of Chang'an (modern Xi'an, Shaanxi Province), Emperor Wu of the Han dynasty (reigned 141-87 B.C.E.) set aside a large wilderness preserve for imperial hunts and excursions, and commissioned the poet Sima Xiangru (179-117 B.C.E.) to compose a long prose poem, or rhapsody (fu), to record its many pleasures. Sima's dazzling verbal description of the park's terrain and the extravagant hunts that took place in it, has long been celebrated as one of the most extraordinary displays of poetic creativity in the Chinese language. His fu served as the basis for this composition by the Ming dynasty painter Qiu Ying, who created The Imperial Park over a five-year period.

Executed in the meticulous blue-and-green style, Qiu's painting was immediately hailed by contemporaries as one of his greatest masterpieces. His initial version of the painting is apparently lost, but the composition survives in several copies, such as the work seen here, which may be an early second version. More than twelve-and-a-half meters of silk in length and painted with various costly pigments--including blue and green mineral colors created from crushed azurite and malachite--this lavish scroll was undoubtedly intended for a collector of expensive taste and considerable wealth. The section displayed here illustrates the following passage of Sima's poem:

Detached palaces, separate lodges,
Stretch over the mountains, straddle the valleys:
Tall corridors pour out in four directions,
With double decks and twisting passageways;
Fitted with ornate rafters and jade finials,
Carriage roads are laced and linked together.
In the covered walkways to walk completely around,
Long is the course and midway one must halt for the night.
On leveled peaks they built the halls,

With tiered terraces rising story upon story,
And cavernous rooms in the crags and crannies.
Downward through the deep darkness nothing can be seen;
Upward, one may clutch the rafters to touch the sky.
Shooting stars pass through the doors and wickets;
Arching rainbows stretch over the rails and porches. 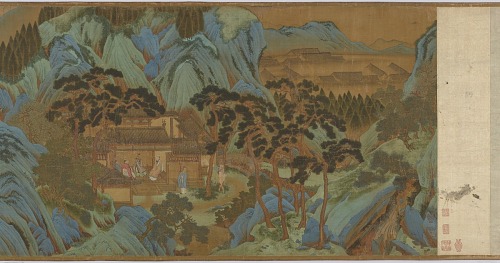