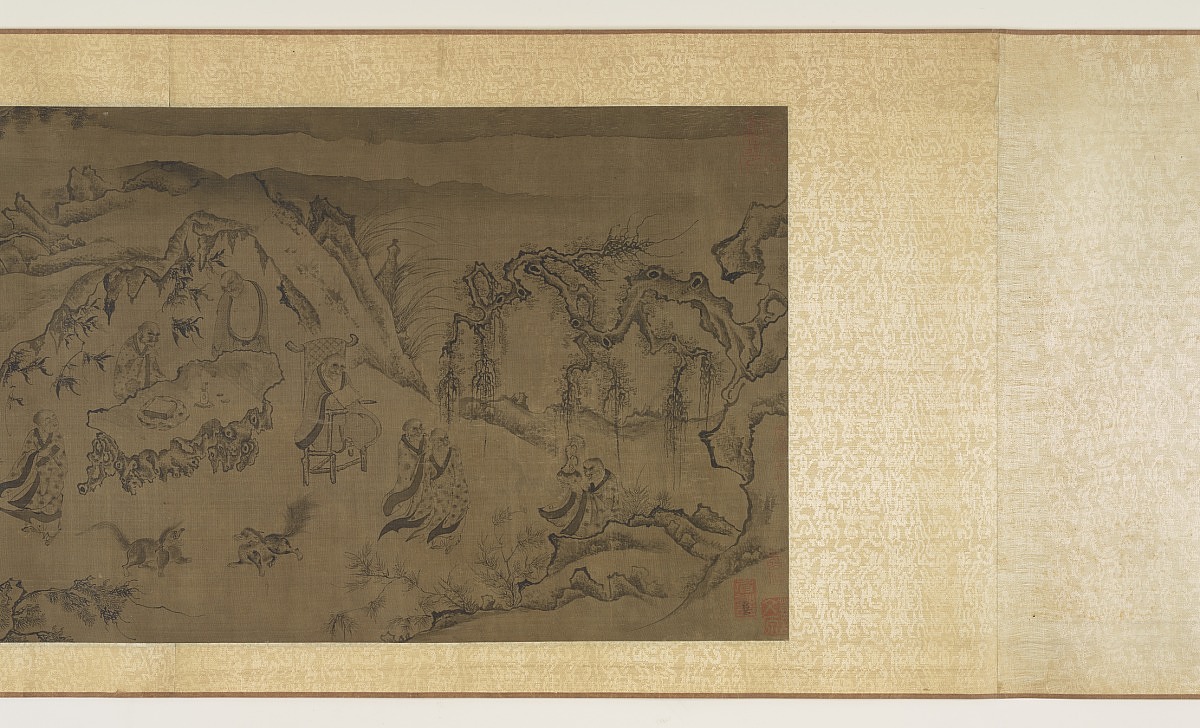 Guanyin and about fourty Luohans involved in various activities with several attendants in a mountainous landscape. On the painting, one signature on lower left end; Eleven seals in total, with five half seals on the right end. Three colophons follow the painting, each bearing a signature and one seal.

Guanyin and about fourty Luohans involved in various activities with several attendants in a mountainous landscape. On the painting, one signature on lower left end; Eleven seals in total, with five half seals on the right end. Three colophons follow the painting, each bearing a signature and one seal.

First certificate following the picture reads: "After the death of Buddha, the people began to become indulgent and dogmatic. All sages and good wise men retired from society, and only left their doctrines to warn the people. The people did not understand, and the famous Mountains O-mei, Wu-t'ai, Lu-san, T'ian-t'ai issue rays twenty or thirty feet long and men see the light indistinctly. This scroll is the picture of Ta-o-rakan. It is like a true scenery, and at the same time like an imaginary sight. Lung-mien seems to have got spiritual help, because the picture is so good." Signed: "Chang Yu." Seal below signature reads: "Chang Yu's private seal." (Note: O-mei is in Ssu-chuan province, Wu-t'ai is in Honan province, Lu-san is in Kiangsi province, and Tian-tai is in Fokien province.)

Second certificate reads: "The picture to the right was painted by Li Lung-mien. It is a light sketch of Rakans, and may be said an insurpassable art. He only used light ink and light strokes, and did not use any paint or powder (white paint), and gave the varied aspects. I think this scroll is as good as the paintings of the two famous painters Ku and Lo. I admire Lung-mien very much." Signed: "Chang-sa (capital of Honan province) Li Tung-yang." (famous prime minister of Ming Dynasty.) Seal below signature reads: "Hsi-ai."

Third certificate reads: "The Rakans august features express their spiritual wisdom. Yen-teng (Buddhist god) and Ming-ch'in (also Buddhist god) cannot be compared with the Rakans. But the principles of 'No life' cannot be explained in the picture." (A poem by) signed: "Wang Yu-feng." Seal below signature reads: "Wang's seal."

Two seals above the signature and two below it. At the right, five half-seals, one with a secret signature written on it. Following the painting come three certificates, each with a seal, the first seal being a private seal of Chang Yu and the second certificate being signed by Li Tung-yang, a famous Prime Minister of the Ming dynasty. 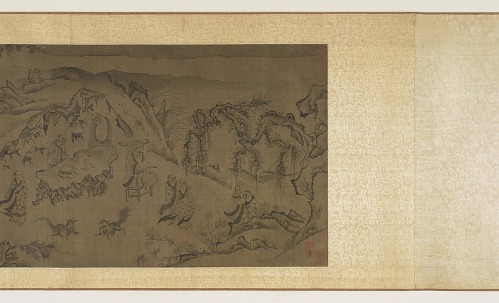