Celebrated for thousands of years in Iran, Central Asia, and the Caucasus, Nowruz—which means “new day” in Persian—coincides with the spring equinox and represents a time of renewal. Typically, the day falls on the 20th or 21st of March each year.

Although early forms of new year celebrations took place prior to the third century CE, marking the beginning of spring became the most important annual ancient Near Eastern ceremony during the Sasanian period (224–651). On this occasion, the king would hold audiences for citizens and representatives of the empire, who came together to show their loyalty. Elaborate gift exchanges, as depicted on the walls of Persepolis, strengthened the bond between the sovereign and his people. At the royal court, Nowruz ceremonies featured minstrels who recited poetry and were accompanied by musicians and singers. Special melodies were composed to praise the king, while other lyrics applauded epic heroes and the beauty of nature. The songs spoke admiringly of spring and the season’s power to rejuvenate with the breath of its wind and refreshing scents.

Nowruz celebrations have evolved over time, and each region has its own unique traditions and customs. But their main feature remains the gathering of families and friends to welcome the arrival of spring.

This year, the marking of Nowruz at the National Museum of Asian Art will be different due to COVID-19 restrictions. Although we cannot welcome you in person at the museum to celebrate this day, we have many activities you can enjoy from home. 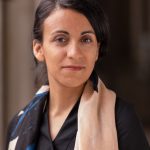 Antonietta Catanzariti is the Robert and Arlene Kogod Secretarial Scholar, assistant curator for the ancient Near East, at the Freer Gallery of Art and Arthur M. Sackler Gallery. A specialist in the ceramic economy and art of the ancient Near East, Catanzariti is interested in the impact of landscape and trade routes on the formation and interactions of ancient communities.