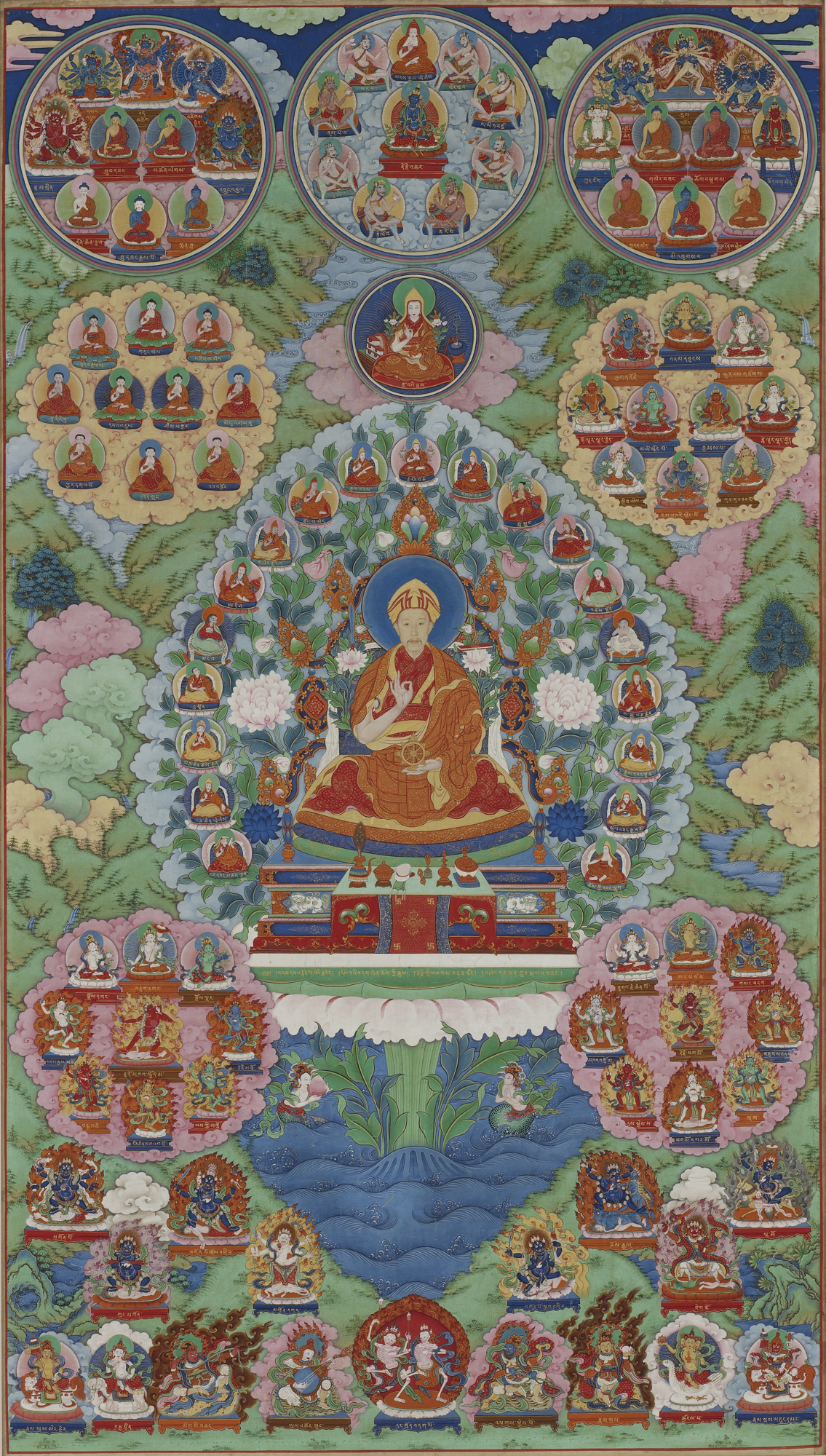 Students will analyze a portraitan image of a person, usually focused on their face and shoulders. of Emperor Qianlong(chee-en-long). They will look closely at the elements of the painting to see how Buddhism(bood-ihz-uhm) a widespread Asian religion or philosophy founded by Siddartha Gautama in northeastern India in the 5th century BCE., the Mandate of Heaven, and foreign interactions contribute meaning to art.

Beginning in the Zhou(joe) dynastya series of rulers from a single family. (ca. 1050–221 BCE), the concept of the Mandate of Heaven was used to validate rulers in China. As the Son of Heaven, emperors identified as the mediators of the social order, linking the earthly world to the heavens. The successes and failures of a ruler or dynasty corresponded with the cosmic order and the will of heaven. The Qing dynastythe last imperial dynasty of China, 1644–1911. (1644–1911) embraced the Mandate of Heaven by acknowledging the legitimacy of the preceding Ming dynasty (1368–1644) in order to portray a natural transfer of power from one dynasty to the next.

Emperor Qianlong(chee-en-long) (born 1711–1799, reigned 1735–1796) of the Qing(ching) dynasty, like the early Qing emperors, welcomed foreign influences, which can be attributed to their identities as Manchus rather than ethnic Han. Their rule expanded into the areas of Mongolia, Tibet, and central China, and as such, Buddhism(bood-ihz-uhm) a widespread Asian religion or philosophy founded by Siddartha Gautama in northeastern India in the 5th century BCE. was a prominent religion for political reasons. In this portraitan image of a person, usually focused on their face and shoulders., Qianlong is depicted as Manjushri(mahn-joo-shree), the bodhisattva(bo-dee-saht-vah) an enlightened being who chooses not to proceed to Nirvana but instead remains on earth to guide others in their paths toward enlightenment. of wisdom. With the emperor’s right hand, he expresses a gesture of debate or teaching, while in his left hand, he holds the wheel of the law. The lotus blossoms on either side of him hold a sutra(soo-truh) a Buddhist holy writing or text. and a sword, which are objects generally related to representations of Manjushri. Giuseppe Castiglione (Lang Shining, 1688–1766), an Italian painter serving at the Qianlong court, painted this portrait on silk with rich colors, suggesting this portrait was intended for imperialrelating to an empire, an emperor, or the home of royals. use. Some critics claim that Qianlong’s own fascination with material culture and objects conflicted with the asceticism of Buddhism.

Manchu(man-choo) ethnic group that lived for centuries in the northeast of modern-day China. In the seventeenth century CE, Manchu people conquered China and ruled there for more than 250 years.: a minority ethnic group primarily from northeastern China.

Mandate of Heaven: a belief that a ruler is bestowed a right to rule by divine powers.

“The Emperor in the Cosmic Order”: http://afe.easia.columbia.edu/cosmos/irc/emperor.htm.

Object: The Qianlong Emperor as Manjushri, the Bodhisattva of Wisdom