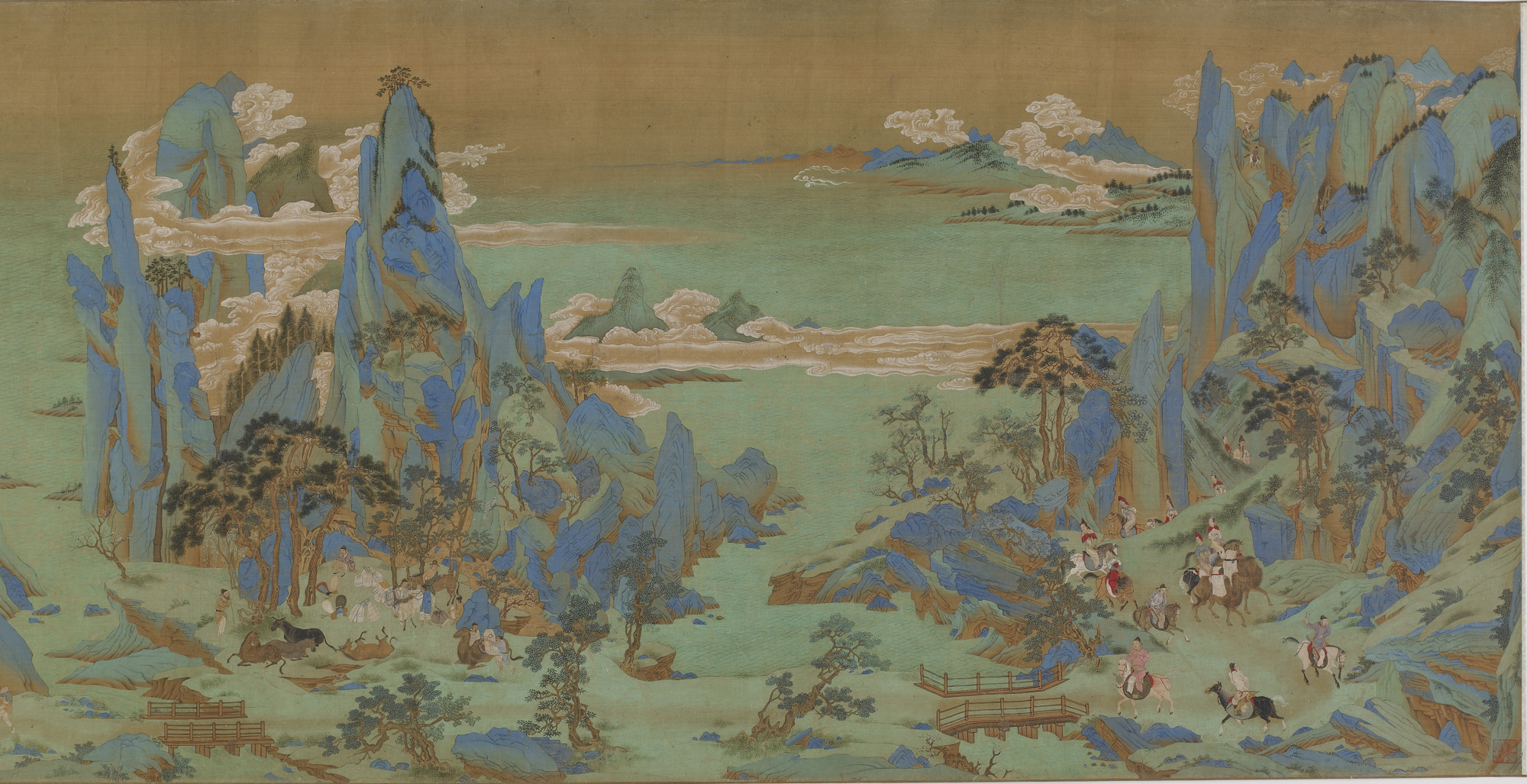 For centuries Chinese painting had three major formats: hand scrolls, hanging scrolls, and album leaves. A hand scroll is a continuous roll of paper or silk bearing passages of calligraphythe art of producing decorative handwriting with a pen or a brush. and painting. It is opened, or unrolled, only when someone wants to view it. One would unroll it from right to left on a table and pause to appreciate it, one section at a time. Important hand scrolls are stored in special boxes and are carefully unrolled one portion at a time for viewing by only a few people. Looking at the poetry, painting, and calligraphy on a scroll is like reading chapters in a book. A Chinese hand scroll is “read” from right to left, the same way classical Chinese writing is read. One multitalented artist could work on a hand scroll alone, or several artists could collaborate, with one person painting the landscape scene, another composing the poetry, and a third writing in beautiful calligraphy.

Journey to Shu(shoo) a region in southwest China, modern-day Sichuan province. is one of several paintings that depict scenes from the famous love story of the emperor Ming Huang(ming hwahng) Emperor Xuanzong (reigned 712–756). (685–762) and his concubinea woman who lives with a man but has lower status than his wife or wives. Yang Guifei(yahng gway fay) literally, “Imperial Consort Yang”; beloved consort of Emperor Xuanzong of the Tang dynasty.. It is traditionally attributed to the artist Qiu Ying(chee-oh ying) (ca. 1494–1552). The painting depicts four groups of travelers negotiating a mountainous track. Starting from the right, several women riders, each wearing a piece of red clothing, emerge from the mountains, accompanied by several men in front and at the rear. Proceeding left from the bridge, traveling merchants rest among trees. One of their horses rolls happily in the grass. The third group of travelers appear exhausted from the journey. Feeling concerned, the man riding in front looks back at his companions. At left, the fourth group is making their way up the mountain path, which leads to hanging roadways off dangerous cliffs. All figures, horses, and camels are vividly depicted. Trees and flowers are blooming, suggesting it is springtime. Tall, steep green and blue mountains dominate the scene with white clouds floating near the peak.

The compositionthe arrangement of elements in an artwork. of this painting is carefully designed so that whenever viewers open a section of the scroll, they encounter a group of travelers amongst high peaks of mountains. A postscript appears in the colophonin Chinese, “tiba”; an inscription written on an additional piece of silk or paper that is attached to the scroll after the image. Colophons can include a poem, an essay, or words of appreciation for the artist or painting. at the end of the scroll and cites a poem on the hardship of the road to Shu. This serves as a commentary on the image. The painting also has seals from a few collectors and viewers that convey pride of ownership. These common elements of a hand scroll work together to make this painting, or any ancient Chinese painting, a documentary history that connects past and present.

Painted in lavish colors of blue, green, and brownish-yellow, this painting is a typical “blue-and-green” landscape, a style originated during the Tang(tahng) dynastya series of rulers from a single family. (618–907) when trade between China and regions further west flourished. Mineral blue and green pigments were among the western goods that entered China along trade routes. Blue-and-green landscape painting thus became possible and popular during that time. This style was often employed in later periods—the Ming dynasty (1368–1644) in this case—to evoke an era of peace and prosperitythe state of being wealthy or successful..

The current painting is modeled on a well-known landscape Emperor Ming Huang’s Journey to Shu from the collection of National Palace Museum in Taipei. It was traditionally believed to represent the flight of Emperor Ming Huang to Shu (Sichuan(sih choo-ahn)) in summer 756 during the rebellion led by An Lushan(ahn loo-shahn) Chinese general and leader of a rebellion that began in 755, unsuccessfully attempting to overthrow Tang dynasty ruler Xuanzong and declare himself an emperor.. However, its composition differs from its model in many ways, including the addition of an entire section of landscape and the conflict of season. It may be best if we simply appreciate the painting as a depiction of springtime travelers.

Begin at the right side of the painting. Form and composition are very important in Chinese painting. Color is used carefully and intentionally.

“How to Read Chinese Scrolls,” Educator Resource on Chinese Scrolls from the Freer and Sackler Galleries. https://asia.si.edu/wp-content/uploads/2017/07/chinese-scroll-lesson.pdf

Learn: How to "Read" a Chinese Scroll