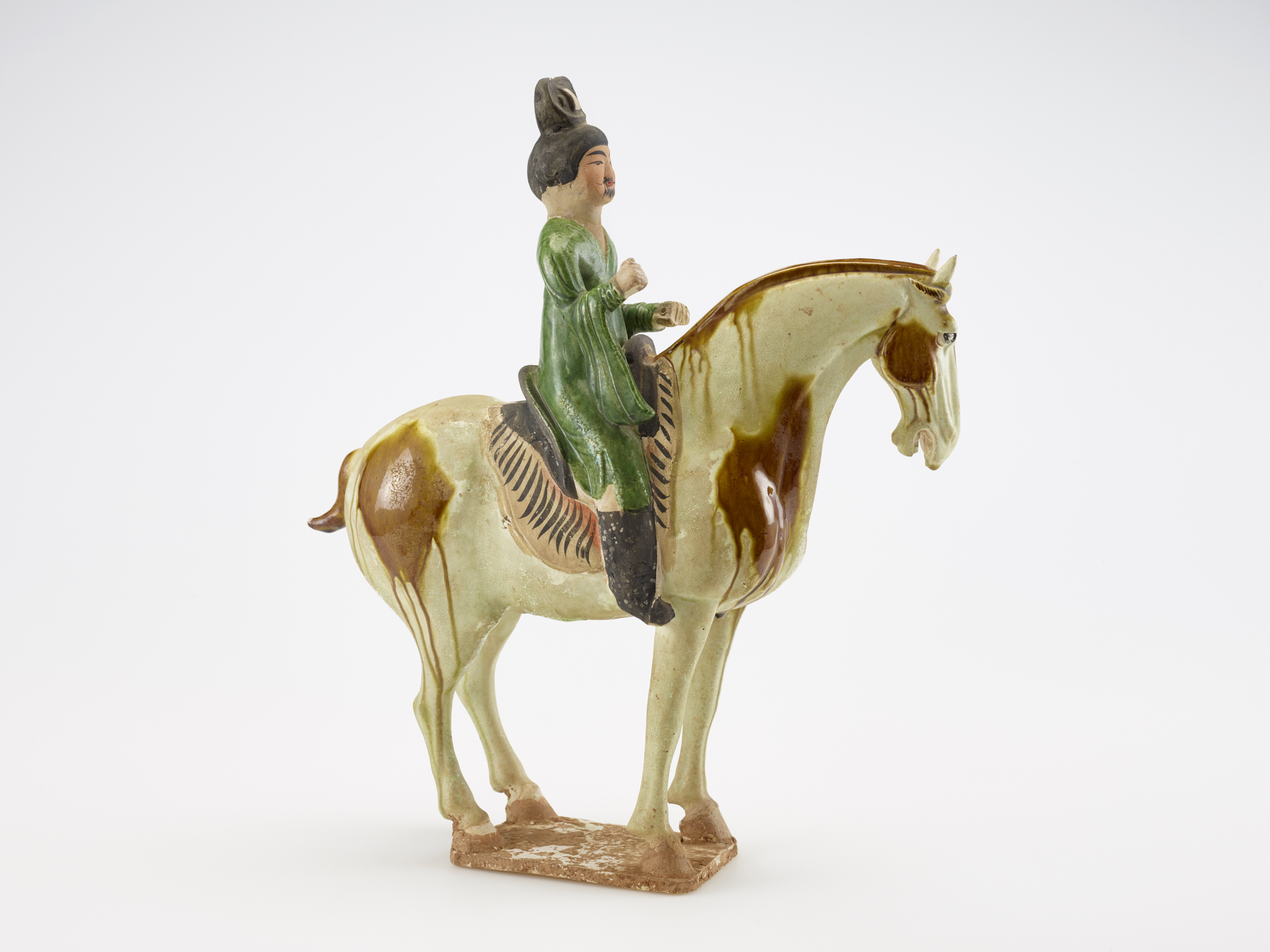 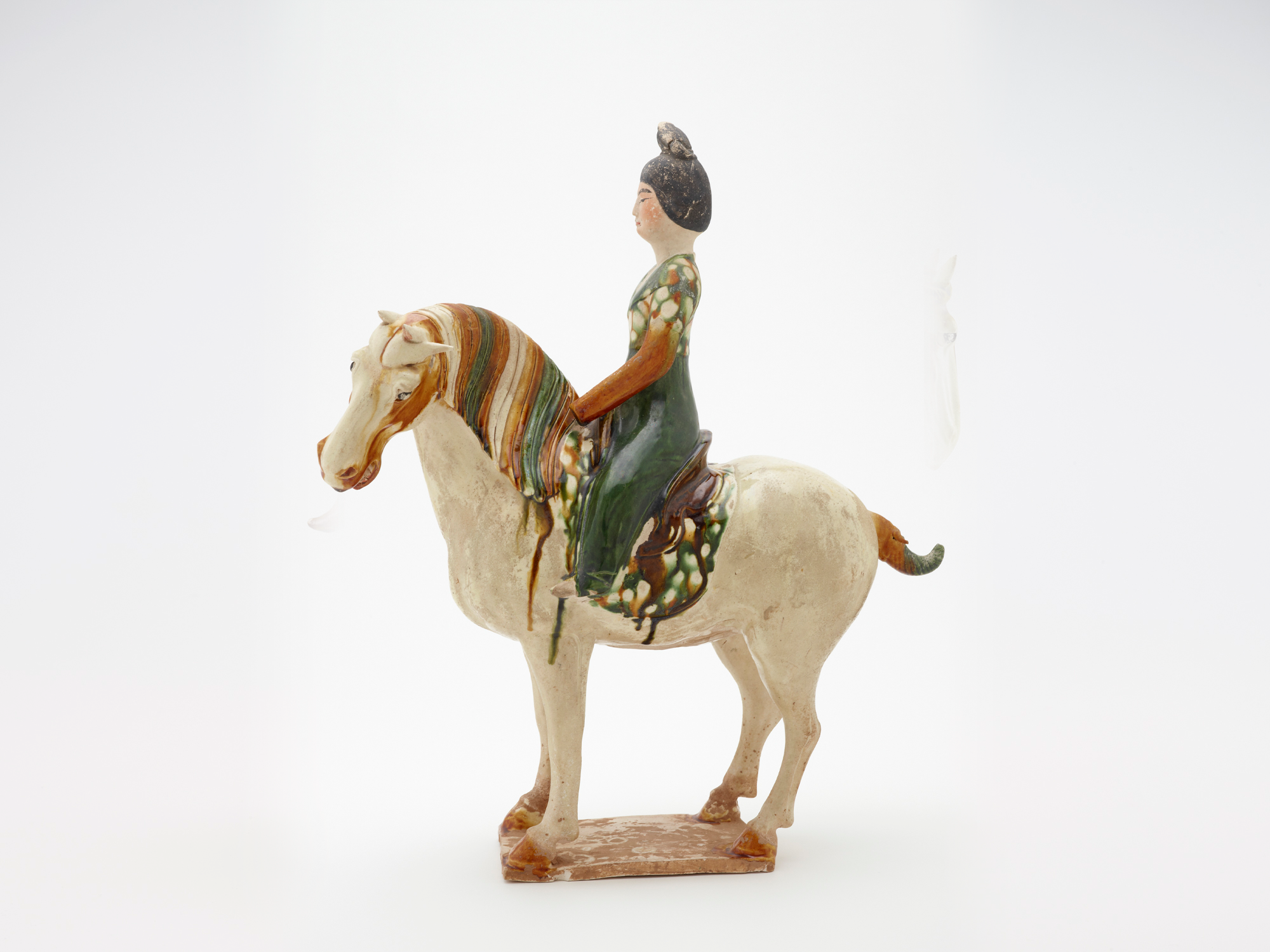 Students will learn that objects found in tombs provide information about Chinese civilization, including beliefs about the afterlife, aspects of daily life, social hierarchies, and the importance of horses for trade. Students will be able to explain how tombs show how people lived, traveled, and ate, and what they wore in the past. Finally, they will create their own tomb figure inspired by their favorite mode of transportation.

For thousands of years, foreign horses have been a subject of appreciation in China. During the Han dynastya series of rulers from a single family. (206 BCE–220 CE), trade and territorial expansion brought China into direct contact with many Central Asian states, such as Sogdianaan ancient Iranian civilization that existed between the sixth century BCE and eleventh century CE. Its territory included present-day Kazakhstan, Tajikistan, and Uzbekistan., which were famous for fine breeds of horses. Chinese horses were not as strong and large as those from Central Asia, and Chinese rulers were very invested in importing horses from abroad. By the Tang(tahng) dynasty (618–907), the demand for foreign horses greatly increased. The Tang Empire had to maintain large hordes of horses in order to secure its borders. The fine breeds of horses were bought from the Fergana Valleya valley in Central Asia that spreads across parts of present-day Uzbekistan, Kyrgyzstan, and Tajikistan. and other Western regions in exchange for silk and other commodities. In addition to military use, the court and aristocracy also used horses for recreation, such as hunting and the popular game of polo. The fifth Tang emperor, Xuanzong(shoo-en dzong) (reigned 713–756), was especially famous for his passion for horses. It is said that the number of horses in the imperialrelating to an empire, an emperor, or the home of royals. stable reached forty thousand, including one hundred dancing horses.

The fascination with foreign horses in China is illustrated by tomb figurines dated to the Tang dynasty. The ancient Chinese believed in the existence of an afterlife. They made tomb figurines as replacements for real objects so the deceased would enjoy their company in the afterlife. Many excavated tombs of the Tang period contain figures of humans on horses such as the pair of horse-riding tomb figures, one male and one female, from the Freer Gallery. The male rider wears a heart-shaped hat, wide-sleeved green coat, and black boots. His arms are raised as if holding the rein. The female rider, with a high topknot, sits up straight on her horse. She wears a colorful short-sleeved jacket and a pair of green trousers, which allow her to sit astride the horse.

The pair is covered by glazea thin, glass-like coating made of powdered rocks, minerals, ashes, and water. Applied correctly it makes a clay body impervious after firing. The colors of glaze are determined by the mineral oxides used and various aspects of the firing conditions. known as sancai(sahn-ts-eye) literally, “three colors”; a dripping effect of three colors of glazes favored in the Tang dynasty. Typically, it refers to yellow, green, and creamy white glaze., or “three-color glaze.” On places where it’s unglazed, such as the riders’ faces and hair, details are painted directly onto the baked clay. The basic colors of the sancai glaze—yellow, green, and creamy white—are achieved by mixing coppera soft malleable metal of a pinkish-orange color with high thermal and electrical conductivity. and iron to a colorless lead glaze. Copper produces green and iron results in a brownish yellow. With the addition of a clear glaze, they provide the three basic colors. Tang sancai wares like this pair of figures are suspected to be reserved for burial use and are seldom, if ever, used in daily life.

Horses on the Silk Roadan ancient network of land and sea trade routes established during the Han dynasty (206 BCE–220 CE) that existed until the middle of the Ming dynasty (1368–1644). These trade routes stretched from China across Asia to the Near East, the Mediterranean, and East Africa.:

Languages of the Silk Road:

The Sogdians: Influencers on the Silk Roads.
https://sogdians.si.edu/

Online Exhibition: THE Sogdians - Influencers on the Silk Roads

Object: Tomb figures of a man and woman on horseback

Video: Does China's Only Female Emperor Deserve Her Bad Rap?