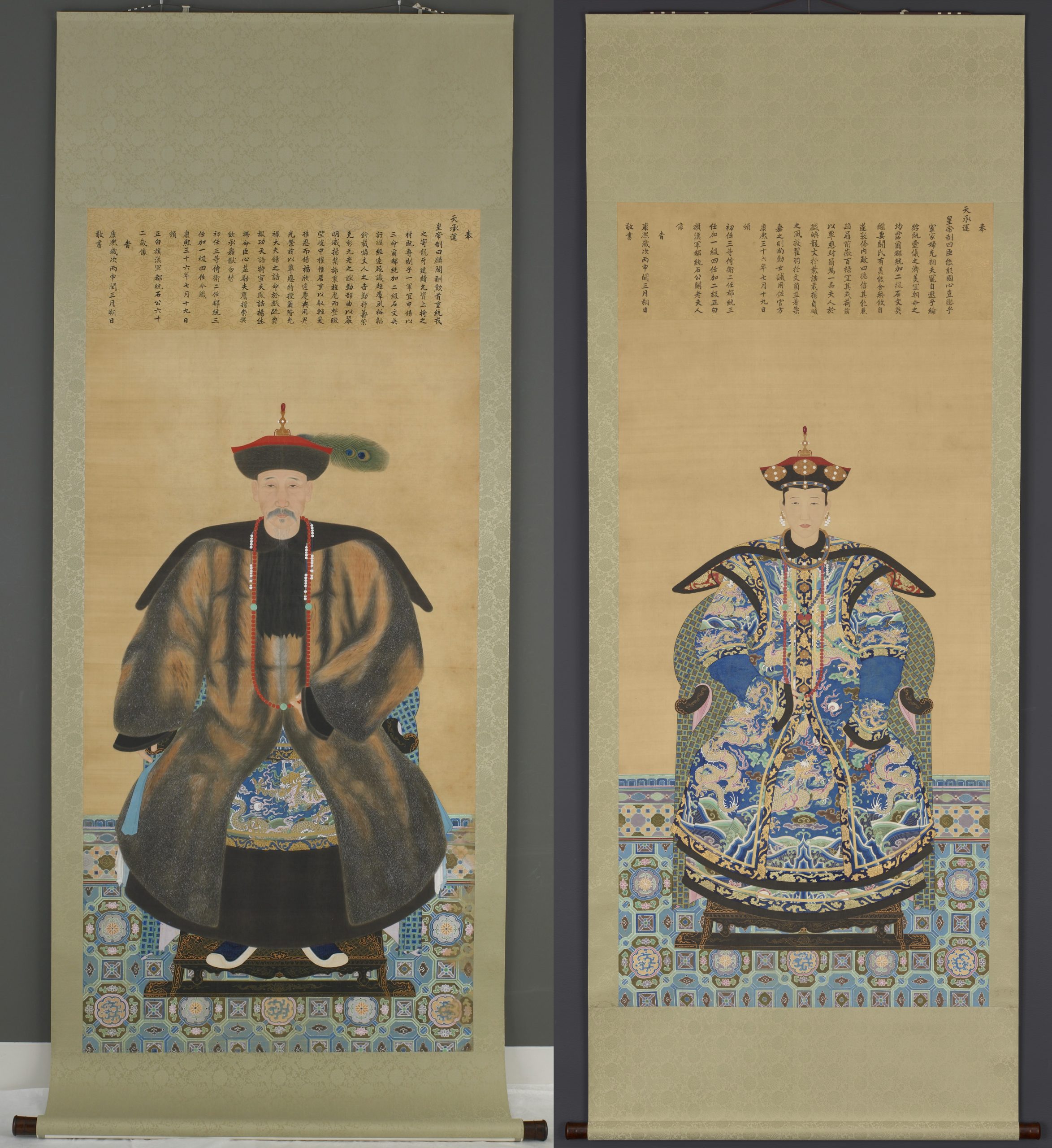 Students will be able to investigate and explain how portraiture communicates a person’s legacy.

In China, a form of ancestorsomeone from whom you are descended. In Western thought, it is usually more distant than a grandparent; however, in Chinese culture, deceased parents and grandparents are considered ancestors. worship dates back at least to the Shang dynastythe earliest Chinese dynasty verified by scholars, ruling from ca. 1600 to 1050 BCE. (1600–1050 BCE). There is ample evidence of Shang(shahng) religious ceremonies in which kings made offerings and sacrifices to royal ancestors and also appealed to them for guidance about the future. Over time, this traditiona practice, skill, or talent that is passed down from generation to generation. evolved and became widespread in Chinese culture. Most traditional ancestor portraits were intended for family veneration as a way to honor and pay respect to a family member who passed away. Creating a portraitan image of a person, usually focused on their face and shoulders. of the deceased and placing it on an altar in the home lets mourners see an image of the loved one. In the past, wealthy families and members of the imperialrelating to an empire, an emperor, or the home of royals. court commissioned elaborate commemorative portraits. In modern times, a photograph is a common replacement for an expensive commemorative portrait. Ancestor portraits are often made as a pair with a husband and wife portrayed individually. They are typically displayed during domestic rituala set pattern of behavior for a religious or other kind of ceremony. ceremonies, especially during the Chinese Lunar New Yeara festival celebrated in China and other Asian countries that begins with the first new moon of a lunar calendar.. Some families also hang ancestor portraits on occasions when they want to report good news, such as introducing a new bride to deceased parents. Baskets of fruit, offerings of food, wine, money, and clothing, and sticks of incensea material created from spices, flowers, and other natural elements that release scents (smells) when burned. might be placed in front of the ancestor portraits on a home altar.

This pair of paintings are ancestor portraits, formal portraits of deceased ancestors for family worship. The paintings depict a couple who were members of the Qing dynastythe last imperial dynasty of China, 1644–1911. (1644–1911) imperial court: Shi Wenying(shir wen-ying), a lieutenant-general appointed by Emperor Kangxi(kahng-she) (reigned 1661–1722), and his wife Lady Guan(gwahn). They each sit in a round-backed chair in a frontal and symmetricala mirror image in which objects on one side of an imaginary line are exactly like objects on the other side. pose. Matching chairs and carpets visually connect the portraits. The settings are otherwise blank, drawing our attention to the sitters. Lady Guan wears full court dress, as we can tell from the highly decorated chaofu(chow-foo) literally, “audience robe”; a dress that the emperor, nobility, and court officials wore for formal occasions. Design and decoration of chaofu depended on the rank of the person who wore it., hat, robes, and a set of court jewelry. She wears three earrings in each earlobe, suggesting she is a Manchu(man-choo) ethnic group that lived for centuries in the northeast of modern-day China. In the seventeenth century CE, Manchu people conquered China and ruled there for more than 250 years. woman (Chinese women generally wore a single pair of earrings). She also holds Buddhist prayer beads in her left hand, providing us with a hint of her religious beliefs. General Shi wears a thick fur coat and a very noticeable “two-eyed” peacock feather on his hat. The number of eyes indicates status. They are imperial rewards that reveal Shi’s high rank. Both paintings have inscriptions that record honors the couple received from the court.

An ancestor portrait is traditionally mounted as a hanging scroll and depicts a full body image. The face is painted as accurately as possible but almost equally important is a detailed depiction of the clothing, which signifies the sitter’s social standing and brings glory to the family. Lady Guan’s face is, however, more masklike compared to her husband’s. This responds to a practice of secluding women from unrelated men, including professional artists. The painter has to rely on her relatives’ descriptions of her facial features to achieve some personal likeness, such as the sharp chin and narrow eyes of Lady Guan. While physical likeness is crucial when depicting the face, artists always avoid making the setting appear realistic because the ancestor is not supposed to be present in the physical world. For example, the carpets in these portraits are painted parallel to the picture plane, similar to a panel of wallpaper.

Create a portraitan image of a person, usually focused on their face and shoulders. of a family member to preserve their legacy.

Create a self-portrait in the style of Chinese ancestorsomeone from whom you are descended. In Western thought, it is usually more distant than a grandparent; however, in Chinese culture, deceased parents and grandparents are considered ancestors. portraits that communicates what they want their legacy to be.

A festive Dragon Robe for winter (The Victoria and Albert Museum).
https://artsandculture.google.com/exhibit/influence-and-longevity-victoria-and-albert-museum/jQISV8UjaQfyKg?hl=en