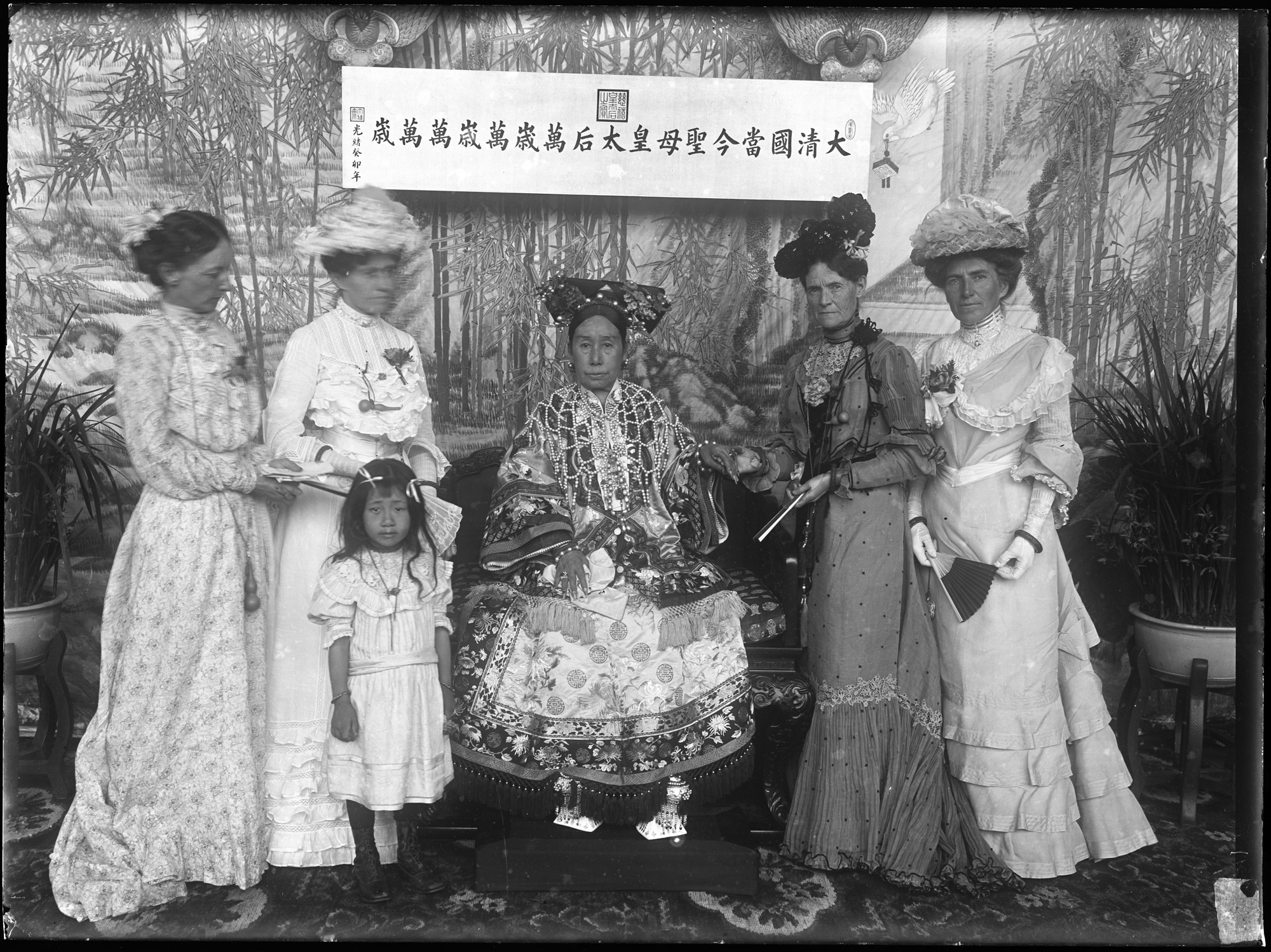 This is an iconic photo of Cixi(tsz-she) (1835–1908), the Empress Dowagerthe title given to the widowed mother of an emperor in China, Japan, Korea, and Vietnam. of Qing(ching) China (1644–1911), in the early 1900s. It was taken in the Hall of Happiness and Longevitylong life. (Leshou tang(tahng)) in the Summer Palace, Beijing. Cixi sits at the center. Behind her is a banner that says “Long Live the Current Divine Mother Empress Dowager of the Great Qing Empire for Ten Thousand Years.” Her embroidered robe is covered with stylized longevity characters and chrysanthemums, a symbola shape or design that is recognizable and has a meaning associated with it. for long life. The auspicioussuccessful or prosperous; a sign of future success emblems signify the wish of longevity for herself and, by extension, for the Qing dynastythe last imperial dynasty of China, 1644–1911.. Standing around her are the wives of foreign envoys. The woman holding Cixi’s hand is Sarah Pike Conger (ca. 1843–1932), wife of the American diplomat to Beijing. Conger spoke highly of Cixi’s many virtues in newspaper articles and books. Their holding hands is a gesture of friendship. Each of the foreign women holds a folding fan and wears a bottle gourd pendant (a symbol of fortune and prosperitythe state of being wealthy or successful.). These are probably gifts from Cixi. They signify good relationships between the Qing court and the respective countries that these women are from.

Cixi(tsz-she) is a contradictory figure in Chinese history. From the 1860s until her death in 1908, Cixi dominated the Qing(ching) court and policies. She was regenta person who rules a country in circumstances of minority, absence, or disability of the monarch. to two successive emperors. Powerful as she was, she did not have a good reputation abroad. During her reign, foreigners and some of Cixi’s countrymen considered the Qing court to be conservative, corrupt, and incompetent. Her reputation was worsened among westerners after the Yihetuan(ee huh too-ahn) Movement of 1900 (also known as Boxer Rebellion), an anti-imperialist, anti-foreign, and anti-Christian uprising. Cixi supported the group and declared war on the foreign powers. In response, a foreign joint army was sent to Beijing and Cixi was forced to flee the capital. After she returned to Beijing in 1902, she changed course and initiated massive reforms. She also took advice from key reformers. These new policies included promoting railroads, founding modern schools, and sending students to study overseas. Cixi also attempted to improve her international image. For example, she would invite the wives of foreign diplomats to receptions at the palace, as shown in this picture.

The picture belongs to the only photographic series taken of Cixi(tsz-she). They were shot by a young aristocratic photographer named Xunling(shoo-uhn ling) (ca. 1880–1943) between 1903 and 1904. The photographs were meant to be used to restore Cixi’s public image. They were designed to convey imperialrelating to an empire, an emperor, or the home of royals. authority and aesthetic elegance. Some of the photographs were presented as diplomatic gifts, including one for US President Theodore Roosevelt (1858–1919).