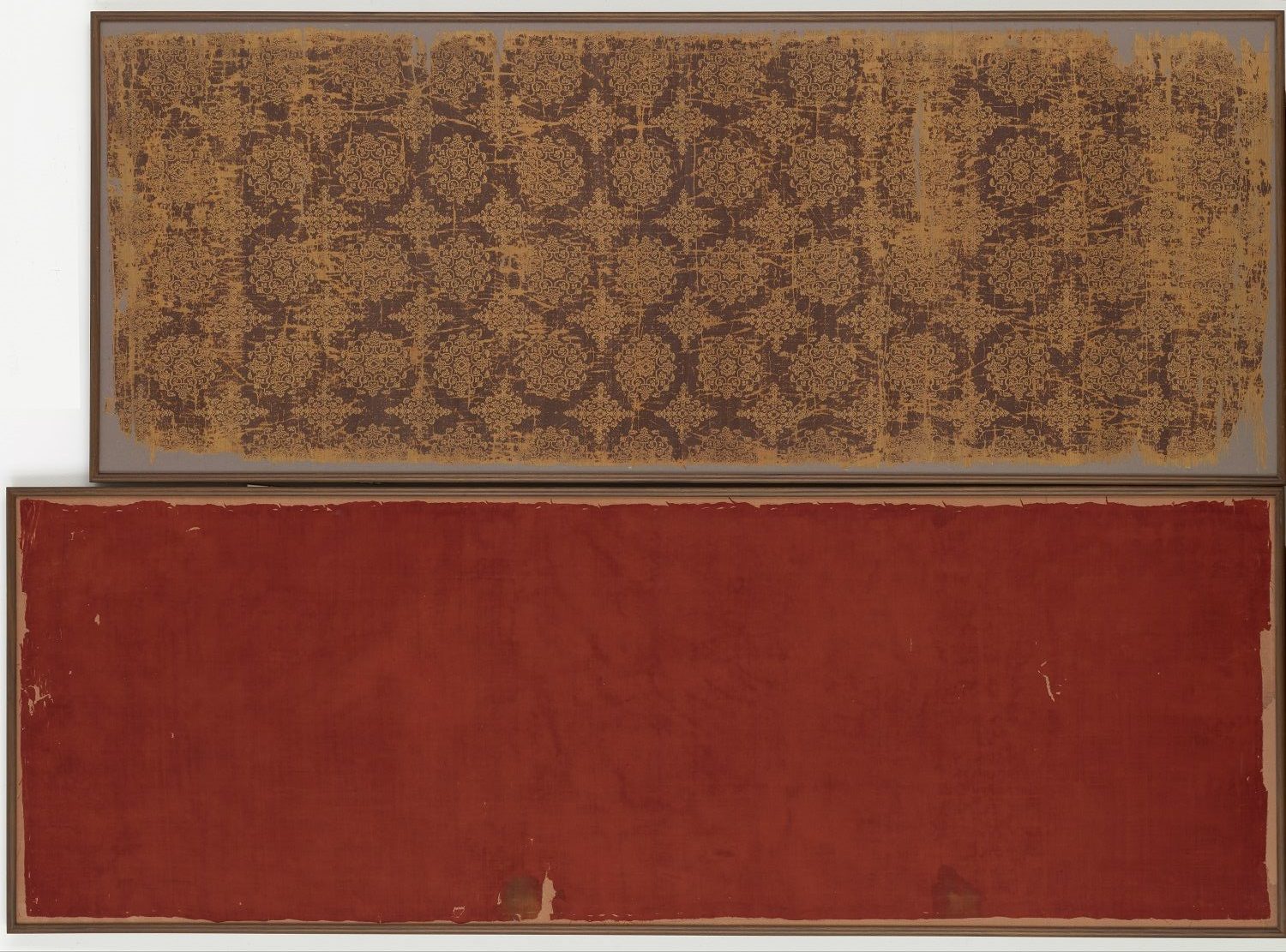 This silk brocadehighly decorative weft-woven fabric with a raised design. is rectangular in shape. It is almost five feet long and two feet wide, which is surprisingly large. Only one of the vertical edges is a selvagean edge produced on woven fabric during manufacturing that prevents it from unravelling., so we know the loom would have been over two feet wide. Considering that the textileany type of cloth or fabric. was made more than one thousand years ago, its state of preservation is remarkable. It is decorated with yellow patterns on a dark purple background. Lines of round floral medallions alternate with lines of diamond designs, or lozenges. Both patterns are formed by horizontal threads (wefts). This differs from earlier Chinese brocades whose patterns are formed by vertical threads (warps).

In the early seventh century, weft-pattern weaves were introduced from Central Asia to China via the Silk Roadan ancient network of land and sea trade routes established during the Han dynasty (206 BCE–220 CE) that existed until the middle of the Ming dynasty (1368–1644). These trade routes stretched from China across Asia to the Near East, the Mediterranean, and East Africa.. This new weaving technique transformed Chinese weaving because it made it easier to add color where it was desired. Since designs develop from the rows of weftthe crosswise threads on a frame or loom that are passed over and under warp threads to make cloth. threads, rather than the pre-placed warpthe lengthwise or longitudinal threads held stationary in tension on a frame or loom. yarns, textileany type of cloth or fabric. craftsmen had more freedom to make more colorful fabrics with complex designs. This technical innovation eventually led to the greatest era of Silk Road textile production. Chinese fabrics—typically silks—were traded widely and became one of the most popular goods on the Silk Road. Due to this popularity, they have been preserved in Christian cathedrals in western Europe as well as in Buddhist temples in Japan. Scholars suspect that this textile piece was made in China by Tang(tahng) weavers who were inspired by Sogdiana person from Sogdiana, and ancient Iranian civilization. designs that were very popular at the time.

Charles Lang Freer bought this textileany type of cloth or fabric. in Nara, Japan. Similar textiles with identical patterns are found in the Shōsō-in, a mid-eighth-century storehouse of Japanese imperialrelating to an empire, an emperor, or the home of royals. treasures in Nara. That makes us suppose that it might have once belonged to the Shōsō-in as well, or perhaps treasured in a nearby temple. Given the textile’s current condition, it is almost impossible for us to tell its original function. Perhaps it arrived as a bolt, or roll, of cloth, a diplomatic gift from China to Japan.

Exhibition: Center of the World - China and the Silk Road

Podcast: Center of the World - China and the Silk Road

Online Exhibition: THE SOGDIANS - Influencers on the Silk Roads