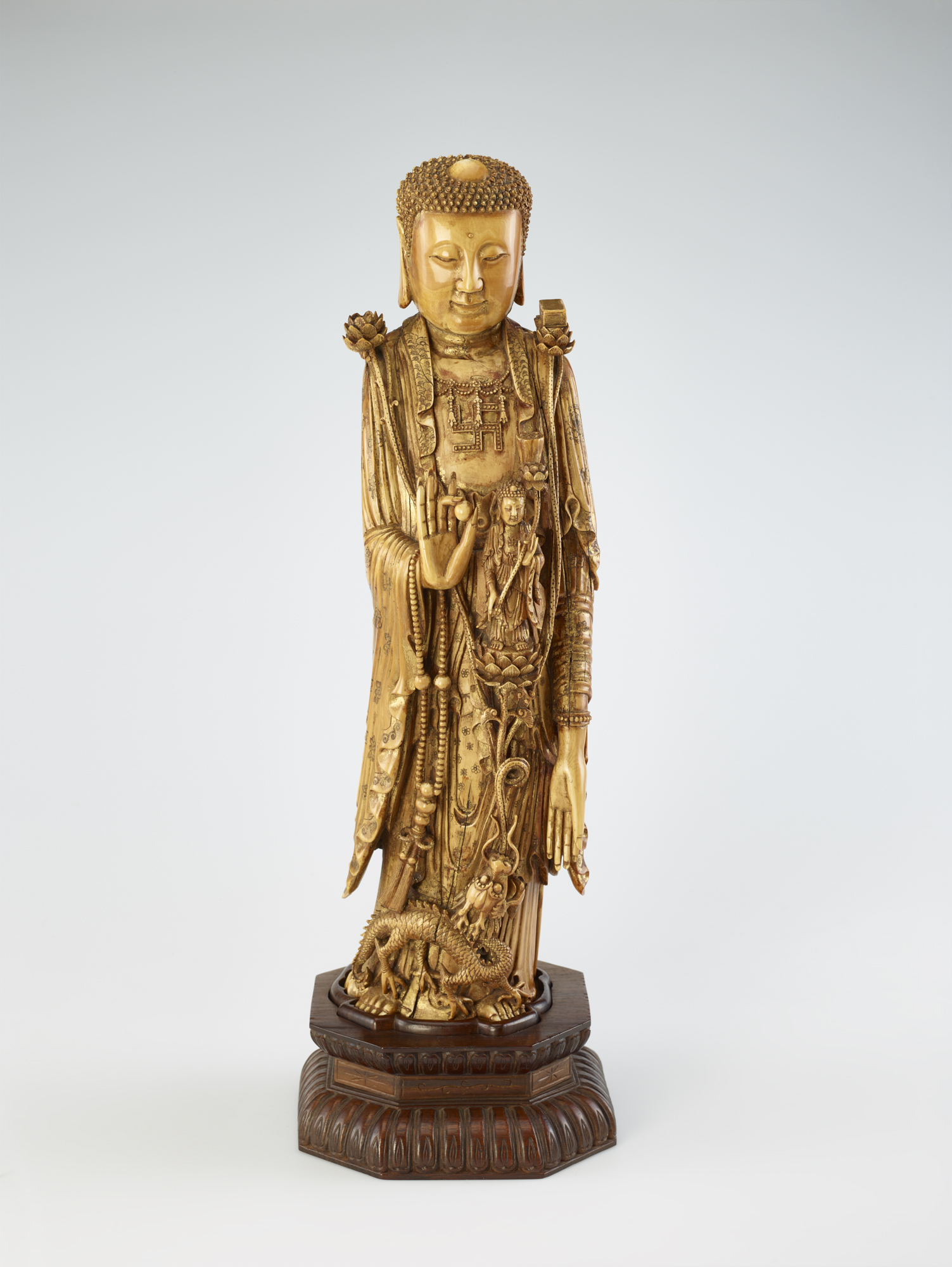 The large standing Buddhist figure appears with a large head and elongated body. The arms and hands are extremely long. The hair is in snail-shell locks. A smooth bump (usnisa(oosh-neesh-ah) a bump on the top of the Buddha’s head that symbolizes his superior knowledge.) is exposed through the hair. The deity looks down and smiles and has a small circle (urna(oor-nah) a dot on the Buddha’s forehead that indicates his special wisdom.) in reliefthree-dimensional forms that protrude from a flat surface. on his forehead. A prominent wan 卍 symbola shape or design that is recognizable and has a meaning associated with it. (a symbol of countless blessings) appears on the chest. The right arm is bent and a jewel is held between the thumb and middle finger. A string of beads hangs from the wrist. The left arm points straight down. A dragon stands on the deity's bare feet, and a multistalked lotus grows out of the dragon’s mouth. The central stalk supports a miniature version of the deity holding a lotus with a seedpod. Each seed can independently rotate within the socket that it fits. Another stalk is topped by a lotus supporting a box of Buddhist sutras (books). Both figures’ garments are covered with decorations of floral and cloud patterns.

This ivory statue presents an interesting aspect of Buddhism(bood-ihz-uhm) a widespread Asian religion or philosophy founded by Siddartha Gautama in northeastern India in the 5th century BCE.. The raised bump on top of both the large and small figure’s head is one of the special body features of a Buddha(bood-huh) literally, “Awakened One”; a being who has awakened to the true reality of existence and is thereby liberated from the cycle of birth, death, and rebirth. A Buddha teaches others the path to Enlightenment.. However, the clothing, jewelry, and Buddhist prayer beads suggest a bodhisattva(bo-dee-saht-vah) an enlightened being who chooses not to proceed to Nirvana but instead remains on earth to guide others in their paths toward enlightenment., or enlightened being. A popular belief might help solve this conflict: Ming (1368–1644) and Qing(ching) (1644–1911) people believed that Guanyin(gwahn-yin) also known as Guan-shi-yin; in Sanskrit, Avalokiteshvara, literally “The Lord who Looks Down [from on High]”; the widely worshipped bodhisattva of compassion who protects and saves all beings., the bodhisattva of compassion, can take the form of a Buddha to help other beings. The attributes of a dragon and a miniature Buddha help to confirm that this figure is Guanyin.

Ivory is a hard, white material that typically comes from elephant tusks, but also from some other animals, including from the extinct woolly mammoth (such as this statue). Like jade, it was carved by workers from some of China’s earliest cultures. This work of art shows extreme attention to decorative details, such as the independently rotating seeds in the carved lotus flower’s seedpod. In addition, the incised patterns on the garments are meticulously filled with ink and gold so that the linear designs can stand out. It is likely that the ivory sculpture was not only made to be worshiped as a deity but also to be appreciated as a work of art.

Exhibition: Encountering the Buddha - Art and Practice Across Asia

Blog: X-Ray Art - The Conservator Will See You Now