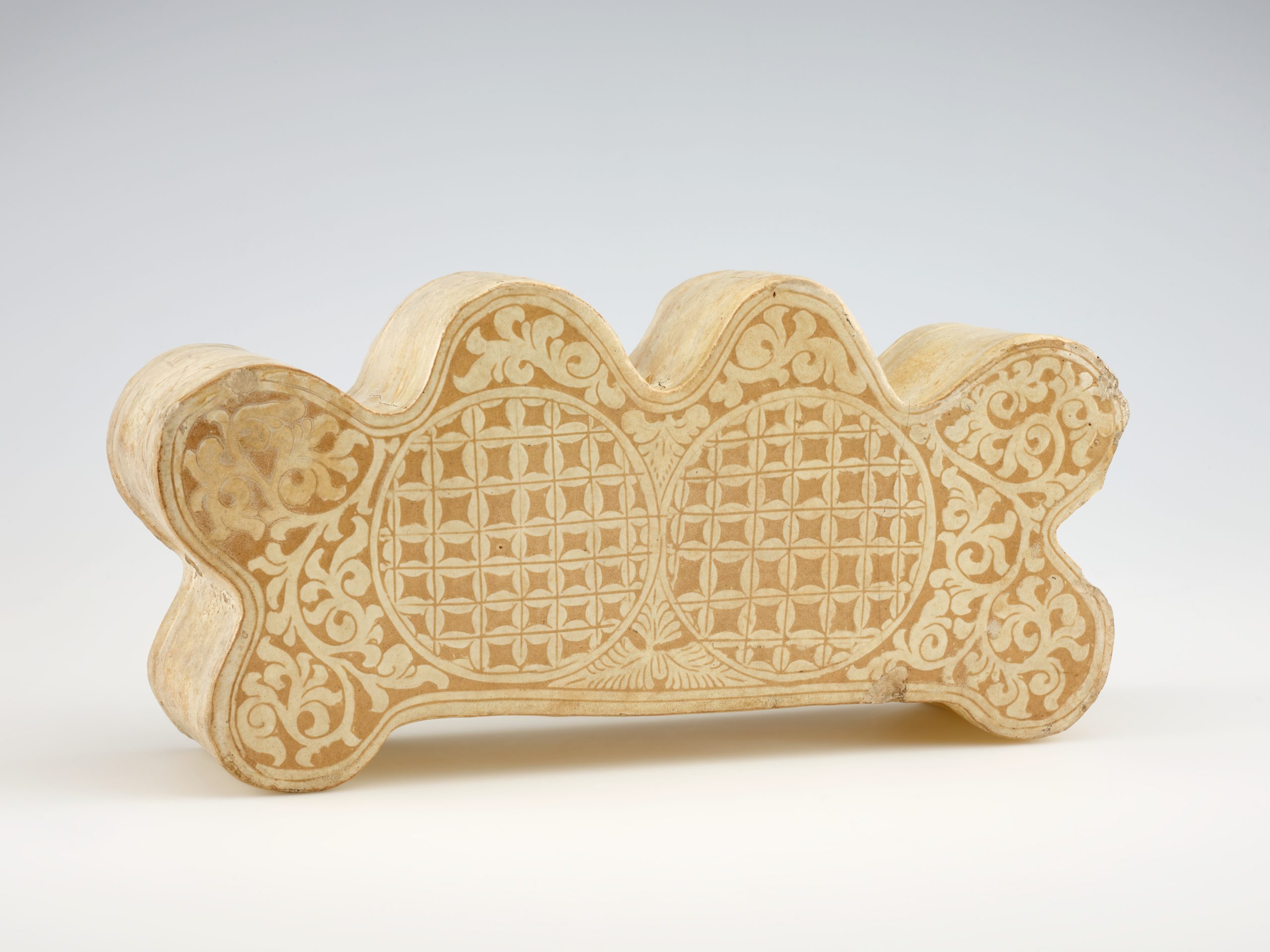 The format of this pillow is a novelty. It is in the form of a mountain with four peaks. On one surface of the pillow, a large peony flower appears in the center. It is surrounded by four peony blooms, each corresponding to a mountain peak, connected to leafy scrolls. On the opposite side, two large circles sit in the middle, each filled with a repeating pattern of small diamonds. Leaf designs occupy the rest of the space. The decorations are executed in low reliefthree-dimensional forms that protrude from a flat surface. in white on an ochre background. A layer of transparent colorless glazea thin, glass-like coating made of powdered rocks, minerals, ashes, and water. Applied correctly it makes a clay body impervious after firing. The colors of glaze are determined by the mineral oxides used and various aspects of the firing conditions. covers the entire pillow. Both the form and the decorations are rendered symmetrically. The pillow was used by laying it flat; however, it’s likely that during the day it was placed upright on the narrow end with the “mountain range” top facing skyward. That way the pillow became not only a functional object but also a beautiful decoration in the living space.

The potter of the pillow first shaped the clay body of the pillow, and when it was leather hard, coated it with ochre-colored slipclay liquefied with water for painting onto a ceramic body. Slip can come in many colors depending on what type of minerals are added to the clay. (clay mixed with water and coloring agents to make a thick, smooth liquid). When dry, he added a layer of white-colored slip on top of the ochre. When the white slip was nearly dry, he carved away areas of it to create a design that stood in contrast to the underlying ochre. Next, using a sharply pointed tool he incised (cut fine details), such as the outlines for the flower petals, into the white slip. The technique of carving slip is called sgraffito (scratched decoration). A clear glazea thin, glass-like coating made of powdered rocks, minerals, ashes, and water. Applied correctly it makes a clay body impervious after firing. The colors of glaze are determined by the mineral oxides used and various aspects of the firing conditions. was applied to the pillow and it was firedthe act of heating pottery in a kiln.. As seen on this pillow, the technique of slip carving makes clever decorative use of different colors. Cizhou(tsz-joe) wares, a type of stonewarean opaque ceramic fired between 1100°C and 1300°C to a “stony” hardness that may be buff, gray, or brown in color. made at many kilns in northern China, mostly between the Northern Song dynastya series of rulers from a single family. (960—1127) and the end of the Yuan(yoo-en) dynasty (1279-1368), frequently used slip decoration. that indicates it was made in 1063.

Ceramicpots and other articles made from clay hardened by heat. pillows in China were first produced during the Tang(tahng) dynastya series of rulers from a single family. (618–907). They became a popular domestic item among middle- and upper-class families during the Song dynasty (960–1279). Ceramic pillows were used not only by the living but for burial as well.

Exhibition: Setting the Bar - Arts of the Song dynasty