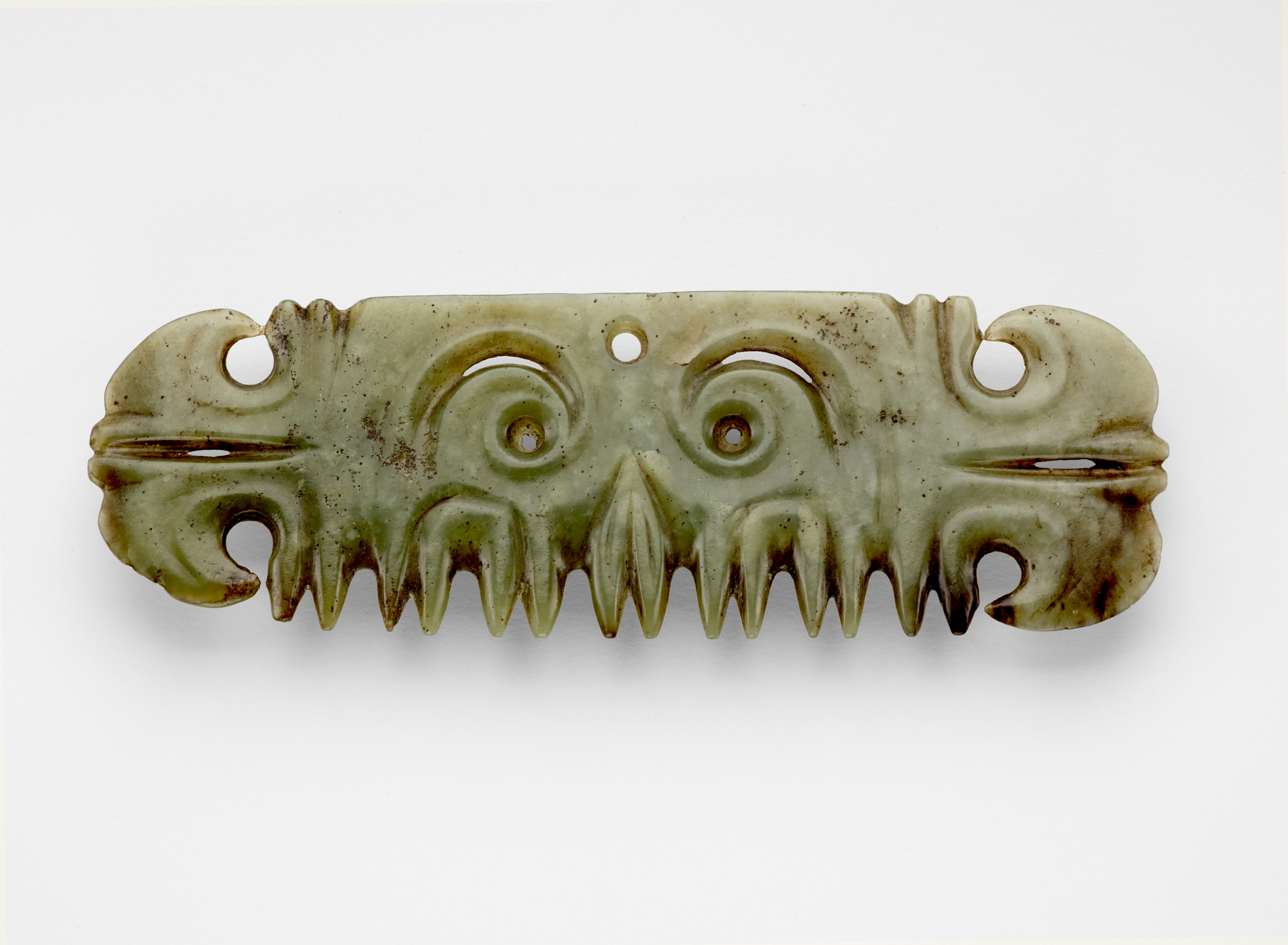 This jade object is rectangular in shape. It’s very thin and the color is an almost clear grayish green. Tiny black dots are scattered on the surface. Find a pair of eyes in the middle. Their “pupils” are two symmetrically positioned holes drilled from front to back. Above the eyes are two semicircular slits. Seven pairs of teeth-like points line up along the bottom edge, flanked on each side by a pair of large curls. These elements seem to suggest a face with eyes, brows, teeth, and curly hair or ears at the sides. Subtle reliefthree-dimensional forms that protrude from a flat surface. carving, designs that slightly rise above the surrounding surface, highlight the curves and contours of the piece. A single hole sits between the eyes. It is neatly drilled from both sides of the plaque. Can you guess why it’s there? It would have allowed the jade piece to be worn similar to a modern pendant, suspended on a cord and worn around the neck. It would have felt cool against the skin. All details are worked from the front, and the back is flat and polished smooth.

Ancient Chinese poetically described jade as “the fairest of stones.” As early as the Neolithic period (ca. 7000–1700 BCE), several early Chinese societies appear to have simultaneously discovered this special and precious stone. A substantial number of jade objects were made during this period. This stunning pendant is a typical jade work of the Hongshan(hong-shahn) culture. Existing more than six thousand years ago, Hongshan people were active in northeast China. They are known for making distinctively shaped jades like this one.

The motifa repeating design, pattern, or image. and meaning of toothed pendants have not yet been deciphered. Many scholars suspect that they are similar to other jade pendants that depict fantastic creatures. For example, the object below from the Cleveland Museum of Art depicts the head of a cow on a human-like body and is also pierced for wearing as a pendant. These pendants appear to be more than mere decorations. They were all excavated from burial sites and found on prominent locations of the body. This pendant was most likely a power and status symbola shape or design that is recognizable and has a meaning associated with it. for an elitea select group that is superior to the rest of a group or society in terms of abilities or qualities. member of the Hongshan(hong-shahn) community.

Blog: Shining a Light on Jades