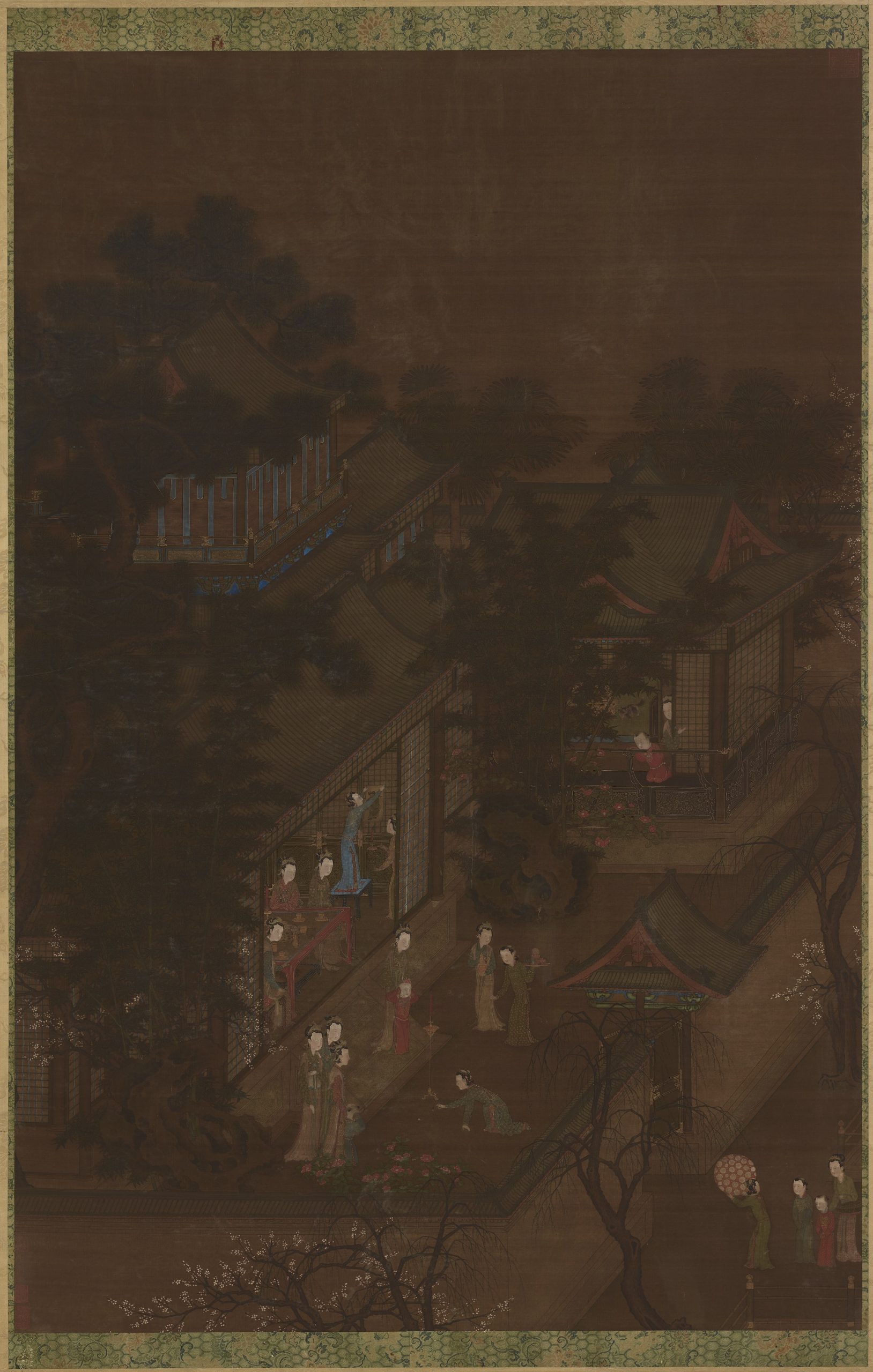 The painting captures the joyful moments as imperialrelating to an empire, an emperor, or the home of royals. women (the wives and concubines of the emperor) and their children celebrate the arrival of the Chinese New Year. Accompanied by their mothers in the courtyard, two young princes cover their ears in anticipation of the explosion as a maid kneels to light a firecracker. Behind them, candles light up the hall where elegantly dressed palace ladies sit around a dinner table. The table is set with delicate dinnerware. A servant girl hangs a portraitan image of a person, usually focused on their face and shoulders. of Zhong Kui(jong kway), a mythological figure and legendary demon queller, on the wall. The portrait and the firecrackers ward off evil influences for the coming year. A third boy looks out eagerly from a nearby room, while another group of women and young prince approach the entrance with a large, colorful ball. Plums and camellias are in full bloom, adding a further touch of festivity to the scene. In addition, dense pine, bamboo, and plum trees suggest that the celebration happens somewhere in southern China, perhaps Nanjing(nahn-jing), the southern capital of the Ming dynastya series of rulers from a single family. (1368–1644).

Given its quality (both materials and painting skills), the painting was likely made for the court or a princely household. It represents a popular genre of court painting: the subject of imperialrelating to an empire, an emperor, or the home of royals. women and their sons. The imperial family needed to perpetuate its lineage and maintain its dynastic authority through successive generations. This genre of painting reflected that necessity. The court would employ specialists in this theme, although they have often remained anonymous. This court image of the Ming dynastya series of rulers from a single family. closely resembles works created by the Southern Song dynasty (1127–1279) imperial painting academy.

This painting depicts the most important festival in China—the Lunar New Yeara festival celebrated in China and other Asian countries that begins with the first new moon of a lunar calendar.. The court celebrated it no differently than the commoners. Several key festive activities enjoyed during the two-week New Year holiday period are brought together in this pictorial scene. The image of Zhong Kui(jong kway) is meant to be displayed on New Year’s Eve. The tray held by the maid in the courtyard contains small goods available in special holiday markets set up just before the beginning of the New Year; these goods include glass balls, strings of beads, and puppets to be performed on the Lantern Festival (at the end of the two-week holiday). Firecrackers are lit throughout the holiday, while the big multicolored ball is typically tossed at the Lantern Festival.