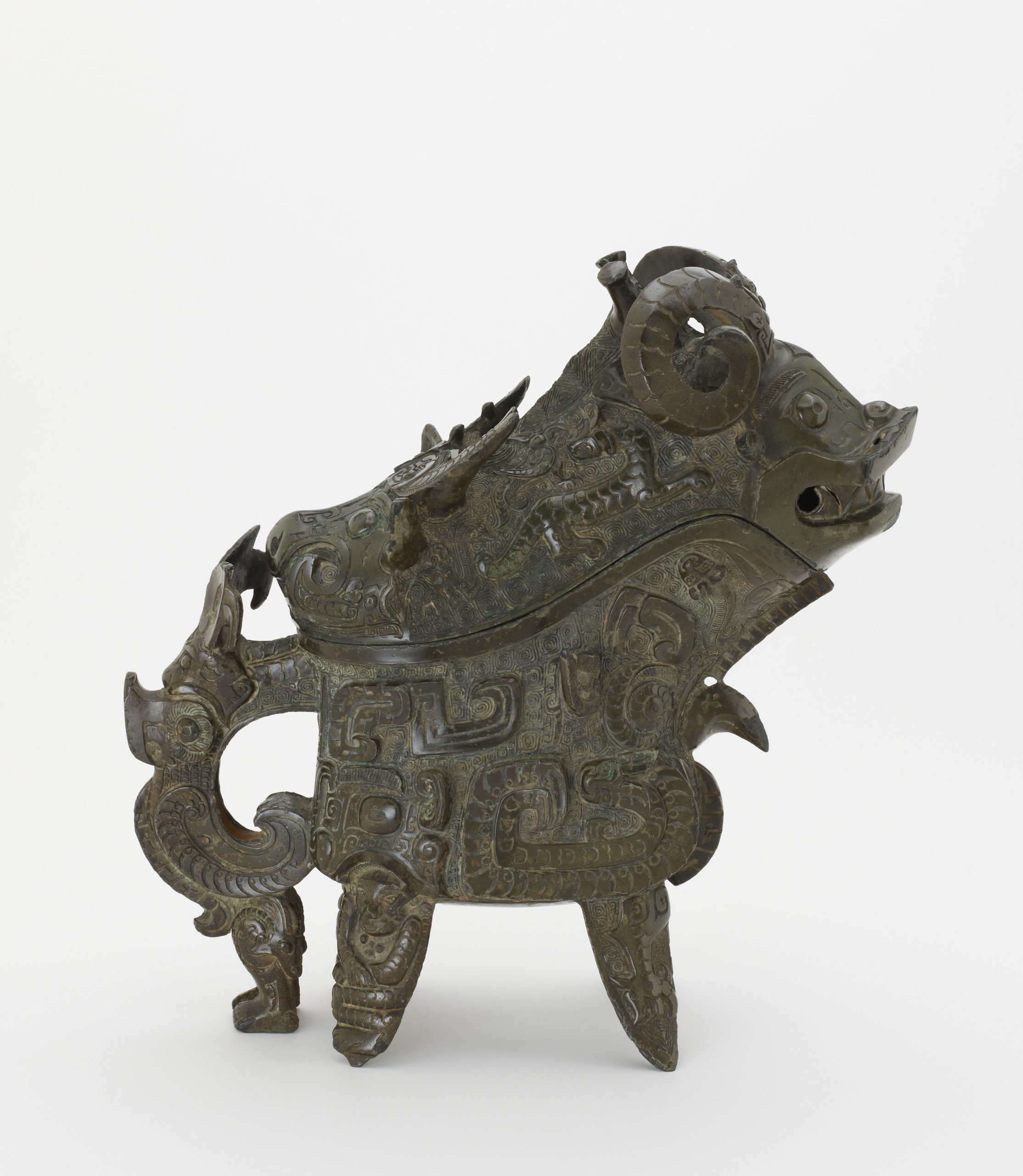 This interestingly shaped ewera jug or pitcher to hold water or wine., a vase-shaped pitcher, is called a guang(gwahng) ("gwang") in Chinese. It is designed as a pouring vessela container such as a cup, bowl, pot, or dish.. The broad, raised spout aligns with a vertical handle at the back. It ingeniously combines a handful of fantastic beasts into its form. At the front of the vessel is a horned bird with a hooked beak. Its wings, composed of coiled dragons, cover its flanks. The space between these areas is filled with matching pairs of dragons, reptiles, and birds. The handle also takes the shape of a standing bird, its head caught in the jaws of a horned beast. It divides the animal maska face covering that usually has a design on it. —taotie(t-ow-tee-eh) a stylized monster face-mask design pattern commonly found on ancient Chinese bronzes with symmetrically arranged eyes, ears, horns, snout, and jaw. —into halves. Find one of its staring eyes. Below it is a snout and open mouth. The creature has the head of a snake man in either side of its mouth. The lid is decorated with two prominent animal masks: a ram head at the front and a buffalo head at the back. See if you can identify the animals that form their horns and fill the area between the two bodiless heads.

Real and imaginary animals are frequently seen in the surface decoration of ancient Chinese bronzes. Realistic depictions of living animals were typically produced in southern China, while in the north, fantastic creatures were prevalent. One of the most characteristic mythical images decorating Shang(shahng) vessels is the so-called taotie(t-ow-tee-eh) a stylized monster face-mask design pattern commonly found on ancient Chinese bronzes with symmetrically arranged eyes, ears, horns, snout, and jaw.. It is a frontal animal-like maska face covering that usually has a design on it. with a pair of staring eyes, often protruding in high reliefthree-dimensional forms that protrude from a flat surface.. Between the eyes is a nose, with jaws shown directly below. The taotie motifa repeating design, pattern, or image. here also includes eyebrows, horns, ears, snout, and fangs. The emergence of animal-shaped bronzea mixture of copper, tin, and often lead that produces a strong metal. vessels and the popularity of animal motifs clearly indicate the importance of animals in the repertoire of artisans of this era.

Chinese bronzes like this guang(gwahng) show a mastery in castingan object made by pouring molten metal or other material into a mold. rivaling that of other ancient civilizations. They were used to hold wine, water, grain, or meat in sacrifices to ancestors or in rituala set pattern of behavior for a religious or other kind of ceremony. banquets by Shang(shahng) kings. The shape of each vessela container such as a cup, bowl, pot, or dish. matches its intended purpose. The fabulous animal motifs are unlikely to have been purely decorative. Although their exact meanings are unknown, they must have played a certain role in the rituals or in the popular imagination.