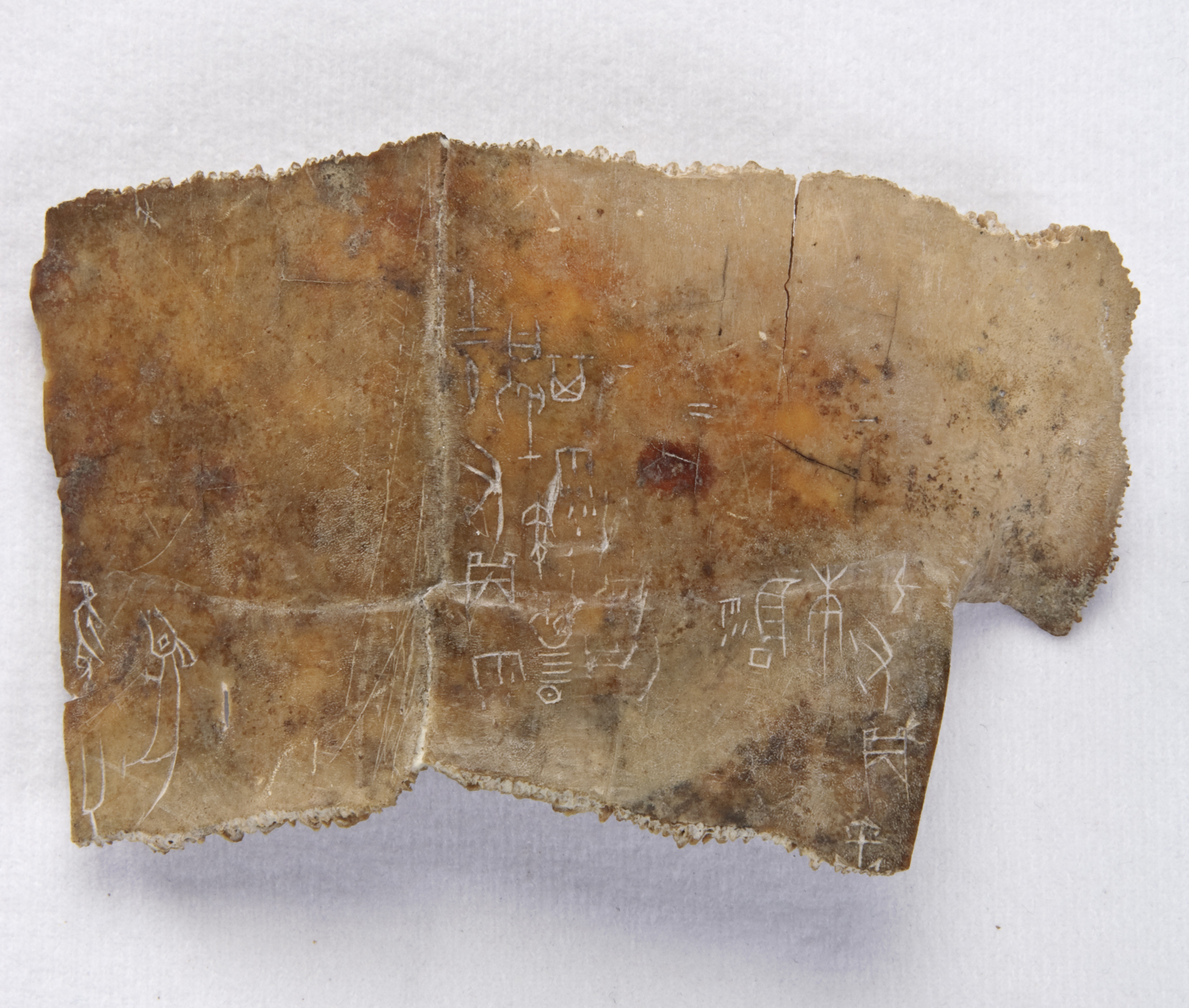 This is a fragment of the hard upper shell—or carapacehard upper shell of a tortoise. —of a tortoise. Carved depressions and burn marks are arranged in orderly rows on the underside of the shell. The cracks that result from the scorching of the depressions are visible clearly in the corresponding locations on top. The top also has three groups of finely engraved inscriptions. Two of them relate to the question of rain. The other is about the outcome of a hunting tour, which states that twenty deer were obtained. The characters belong to the earliest systematic Chinese written language (pictographa picture symbol used to communicate a word, phrase, object, or idea. Pictographs are one of the earliest known forms of writing. Examples can be also found in Egypt and Mesopotamia beginning in 3000 BCE. script) that still survives. These characters were created over three thousand years ago!

This tortoiseshell fragment was used as an oracle bone in the Shang(shahng) court. Both sides of such shells show evidence of their use in ancient rituals to learn about the future. The term “oracle bone” refers to ox scapulaeshoulder blade bones. (or shoulder blade bones) and tortoiseshells used by Shang kings for divinationthe act of foretelling future events or revealing hidden information with the aid of supernatural powers.. The bones of oxen and shells of tortoises were typically prepared in advance (polished and carved). When the king asked a question, a shamansomeone who can communicate with ancestors and divines the future. would perform a rituala set pattern of behavior for a religious or other kind of ceremony. in which he would heat the carved depressions to produce hairline cracks on the opposite side of the bone. He would then interpret the pattern of the cracks to provide an answer to the king’s question. Often times the questions and answers were recorded on the surface of the oracle bone.

Divinations were an important part of the Shang(shahng) king’s role as a political and religious leader. Being the spiritual go-between for the royal class, his people, his deceased ancestors, and the gods, the king was responsible for performing rituals to ensure the health and well-being of his family and people. This was often done by appealing to or consulting with the royal ancestors, who were believed to act as intermediaries between the king and the gods. The king asked about everything, from the weather to the outcome of births, hunts, and battles. He may have also sought insight about a journey or the meaning of a particular event or dream. As a result, we are able to rebuild the history of the Shang dynastythe earliest Chinese dynasty verified by scholars, ruling from ca. 1600 to 1050 BCE. through the rich information recorded on the oracle bonesox bones or tortoiseshells used as tablets by shamans of the Shang dynasty who wrote requests on them to royal ancestor spirits, asking for guidance on important events or information about the future..