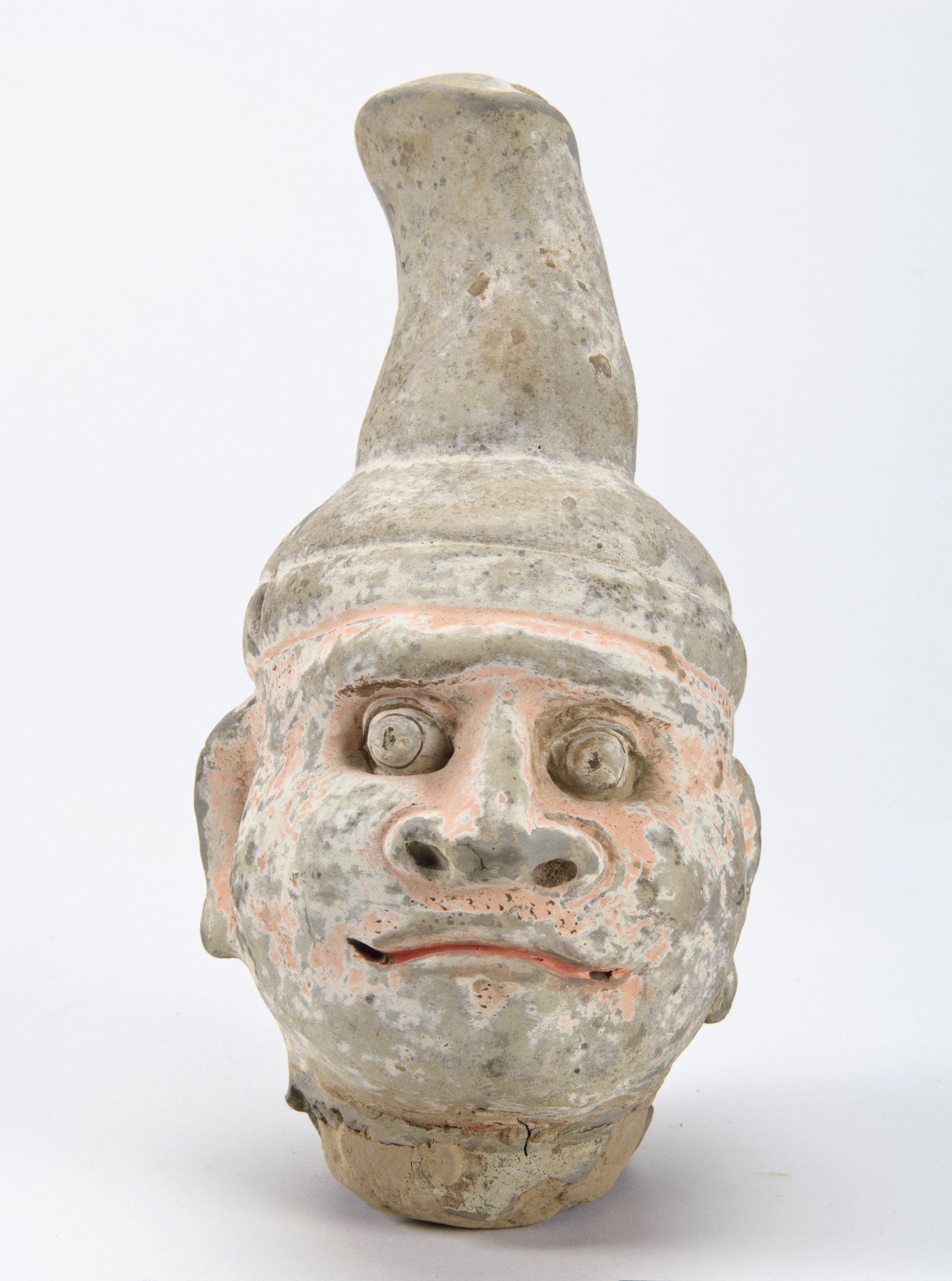 This male head is made of light-gray clay and is missing the rest of his body. Firedthe act of heating pottery in a kiln. in a low-temperature kilna type of oven for firing clay or porcelain to make ceramic ware., it is unglazed and covered entirely with a white clay coating called “slipclay liquefied with water for painting onto a ceramic body. Slip can come in many colors depending on what type of minerals are added to the clay..” The facial features are sculpted and enhanced through paint. Traces of pink, red, and black pigment are still visible on the face. The head seems to represent a Caucasian or Iranian man. He wears a tall Persiana native or inhabitant of ancient or modern Persia (or Iran), or a person of Persian descent. style cone-shaped hat. The craftsman of this head obviously enjoyed the freedom of caricaturing the figure’s foreign appearance. He has bulging eyes with large staring pupils and a prominent nose with big nostrils. It almost seems like he is making a grimace.

Tang(tahng) dynastya series of rulers from a single family. (618–907) China was one of the greatest empires of the world. It possessed an international atmosphere thanks to the openness of its rulers and the Silk Roadan ancient network of land and sea trade routes established during the Han dynasty (206 BCE–220 CE) that existed until the middle of the Ming dynasty (1368–1644). These trade routes stretched from China across Asia to the Near East, the Mediterranean, and East Africa. trade routes that connected China with India, Western Asia, the Mediterranean, and East Africa. In cosmopolitan cities like Chang’an(chahng ahn) present-day X’ian (Shannxi province); capital of the Western Han dynasty and Tang Empire. and Luoyang(loo-o-uh-yahng), non-Chinese visitors came from all over the eastern hemisphere. One could pass by traders, missionaries, and visitors of many different races on the streets. This male head may be based on such a traveler from the west, most likely a Sogdiana person from Sogdiana, and ancient Iranian civilization. (an Iranian people who resided in present-day Uzbekistan and Tajikistan and were known for their trade along the Silk Road during the fourth to eighth centuries).

For the ancient Chinese, the afterlife was as important as one’s existence in the earthly world. This means tombs were considered as homes of the deceased. Since the Qin(chin) dynastya series of rulers from a single family. (221–206 BCE), the ancient Chinese were buried with miniature representations of everything they would need in the afterlife, including horses, entertainers, servants, and other human and animal subjects. This figure may have been made to represent a groom, one who attends to horses and stables. Horses were one of the key goods that Central Asians, especially the Sogdians, traded in. The Sogdians were also known for their horse breeding and training skills.

Exhibition: Center of the World - China and the Silk Road

Video: Does China's Only Female Emperor Deserve Her Bad Rap?

Online Exhibition: THE SOGDIANS - Influencers on the Silk Roads