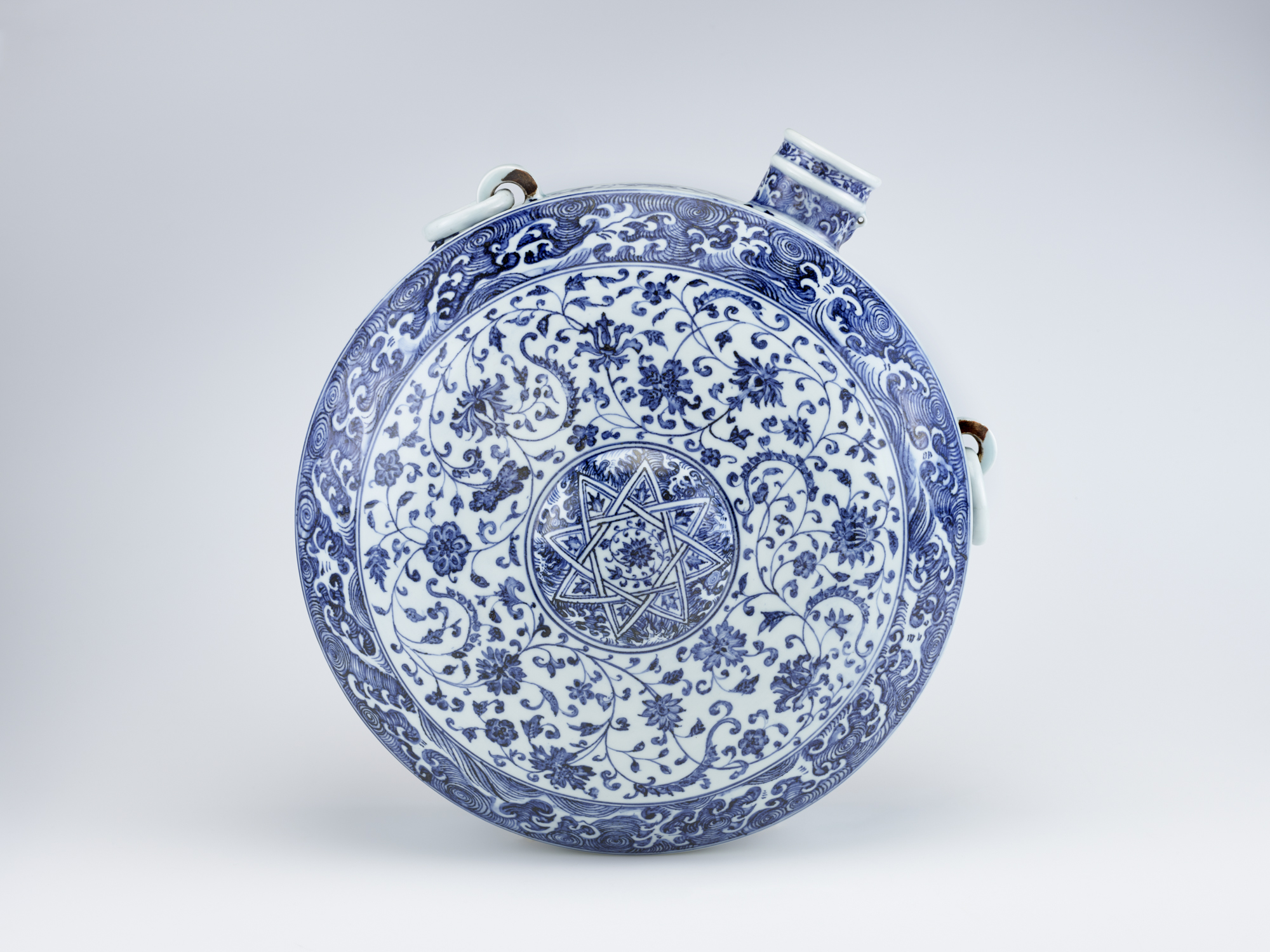 Look at this interestingly shaped ceramicpots and other articles made from clay hardened by heat. object made of porcelaina hard, fine-grained, nonporous ceramic ware that is usually translucent and white. produced in Jingdezhen(jing-duh-juhn). By the thirteenth century CE, the potters there had developed a recipe for a compound clay, which when firedthe act of heating pottery in a kiln. to an extremely high temperature, created a stunning white ceramic material. The object is in the shape of a canteena vessel or container to carry water or other liquids., or water carrier. It has a circular body. On a functional canteen, the loop and ring handles on each side of the neck would have held a leather strap to make it easy to carry the vessela container such as a cup, bowl, pot, or dish. over one’s shoulder; however, this canteen seems too heavy to use in that way. The short, cylindrical ribbed neck would originally have had a cover or stopper. The front of the body is decorated with intricate blue patterns on a white background: a ring of waves encircles the edge and, inside the ring, a floral scroll fills the surface. The center of the canteen has a dome with a central, wave-like pattern surrounding an Islamic eight-pointed star, leaves, and a lotus scroll. Each point of the star contains a single leaf. The side of the body is covered with a continuous scrolling design of lotus and other flowers. The back is undecorated and unglazed porcelain (without color).

Canteens were common objects used by ordinary people to carry liquids. Religious pilgrims in the European Middle Ages (fifth to fifteenth century) also used them to hold holy water and oil. In the thirteenth and fourteenth centuries, artists in the Near East created elaborate metal canteens (see F1941.10) that seem to have inspired this Chinese example. The eight-pointed star in the center, for example, is a symbola shape or design that is recognizable and has a meaning associated with it. often found in Islamic art. However, the technique used to create this canteena vessel or container to carry water or other liquids. reflects its origin in China. The material of white porcelaina hard, fine-grained, nonporous ceramic ware that is usually translucent and white. decorated with cobalttype of glaze composed of cobalt oxide and other minerals that results in a blue color. (blue) designs was a Chinese invention. The heavy weight of the canteen seems to suggest that it was made for decorative or ornamental purpose rather than for actually carrying water. It may have been hung on the wall or placed on a flat surface in a wealthy patron’s residence.

During the reigns of the Yongle(yong luh) and Xuande(shoo-en duh) emperors (1403–35) in the Ming dynastya series of rulers from a single family., potters at the famous Chinese porcelain-producing town of Jingdezhen(jing-duh-juhn) quickly absorbed artistic ideas from imported foreign goods. They experimented with many shapes and decorations modeled after Islamic silver, gold, and brass vessels. This canteena vessel or container to carry water or other liquids., with its unusual shape and decoration, was either made to be exported to the Near East or was made for a follower of Islama monotheistic religion that developed in Arabia in the seventh century CE. living in China. It exemplifies the dynamic flow of ideas and objects between the Islamic world and China that invigorated both artistic traditions.

Lesson Plan: Connecting China and the Near East