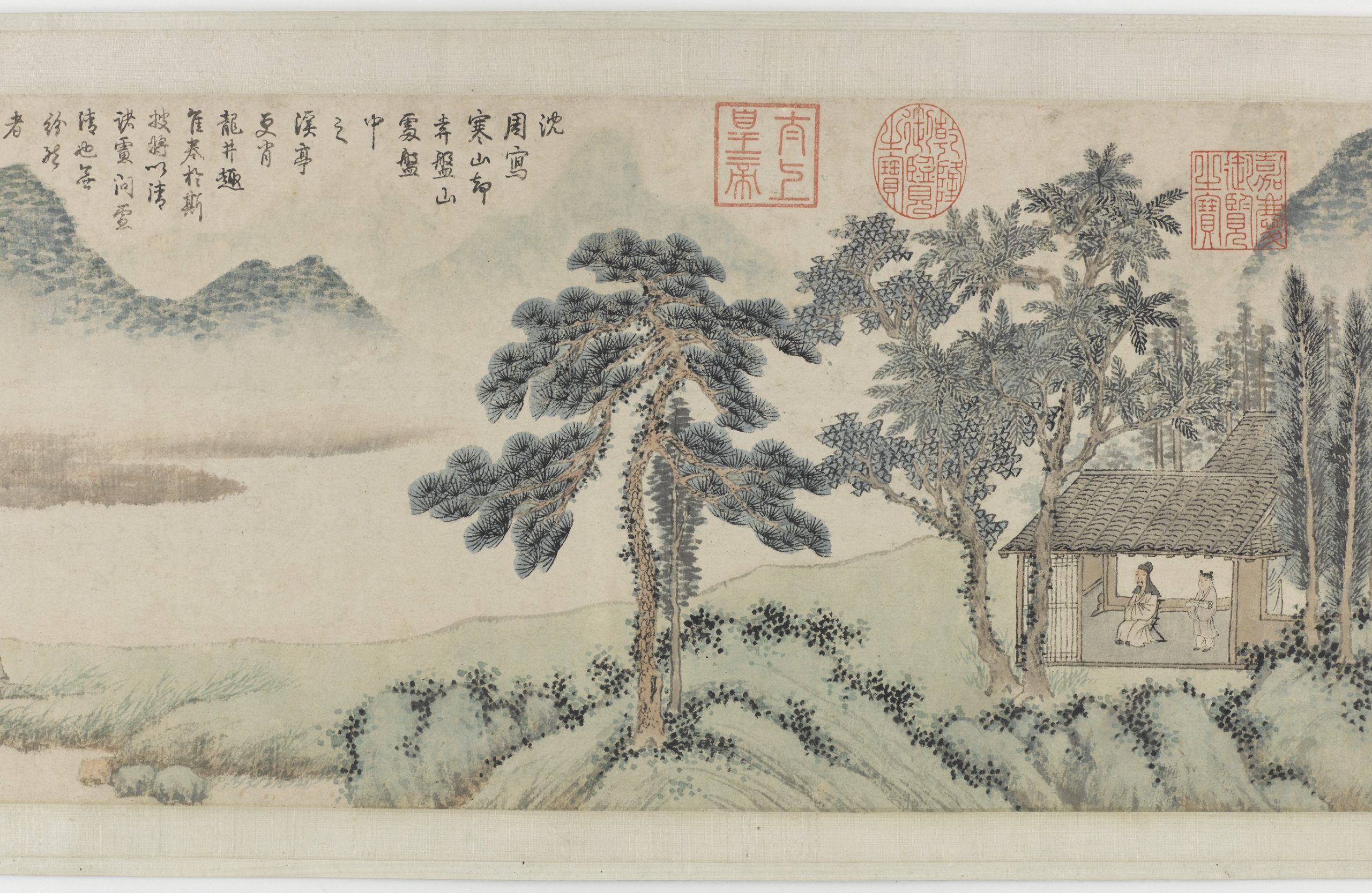 As we open the painting from the right, a gentleman sits in the doorway of a modest studio or residence located among rolling hills. A serving boy stands beside him holding a scroll. They are waiting for the arrival of the gentleman’s friends. One friend with a walking stick is crossing the small bridge. His boat is moored nearby. Further left, another scholar approaches by boat, bringing a box of food and a jar of wine. His serving boy is rowing the boat. The scene is set in a beautiful mountain river landscape. Sprouting willows and blossoming peach trees suggest it is springtime. The artist is Shen Zhou(shun joe) (1427–1509), an elitea select group that is superior to the rest of a group or society in terms of abilities or qualities. painter considered one of the Four Masters of Ming.

In his remarks at the far left, Shen Zhou(shun joe) dedicated the painting to Hua Fang(hwah fahng) (1407–1487). Hua was from a prominent wealthy family and was known for his charitable acts. He is probably the figure seated inside the pavilion. Gardens and estates were considered symbolsshapes or designs that are recognizable and have a meaning associated with them of wealth, cultivation, and social status. Artists during the Ming dynastya series of rulers from a single family. (1368–1644) often honored their patrons by portraying them in a garden studio, thus commenting on the owner’s character and aesthetic taste. The painting here should not be taken as a realistic depiction of either Hua or his property. Rather, Shen was suggesting Hua as a cultivated host in a well-designed, natural-looking garden.

The scroll has quite a few collector seals of the Qianlong(chee-en-long) emperor (reigned 1735–96). He also added three poetic inscriptions in 1765, 1782, and 1791 across the top of the painting, and a fourth one in 1793 before the beginning of the painting. Such continuous attention clearly indicates the emperor’s admiration for this work. Wen Zhengming(wen jung-ming) (1470–1559), the star pupil of Shen Zhou(shun joe), wrote a long inscription in 1545 in an attachment to the painting, commemorating his teacher. These seals and comments compose a vivid history of the painting’s circulation.

Exhibition: Painting with Words: Gentleman Artists of the Ming Dynasty