The Zhou(joe) people had their origins in the far western reaches of the Yellow River in present day Shaanxi(shahn-shee) province. They conquered the Shang(shahng) around 1050 BCE and established their own dynastya series of rulers from a single family.. The Zhou shared many cultural similarities with the Shang. They performed similar religious rituals, used bronzea mixture of copper, tin, and often lead that produces a strong metal. rituala set pattern of behavior for a religious or other kind of ceremony. vessels, and practiced divinationthe act of foretelling future events or revealing hidden information with the aid of supernatural powers..

During its first years, known as the Western Zhou (ca. 1050–771 BCE) because its capital was located in western China, the Zhou dynasty mirrored the Shang in ruling as a centralized empire. Since its territory was vast—larger than the Shang—the early Zhou kings developed a form of feudalism with regions ruled by appointed relatives and other noblemen. To legitimize their overthrow of Shang, they introduced the concept of Heaven (Tian), and the Mandate of Heaven. They believed that a king could rule only if he received heaven’s favor. This belief carried a sacred moral power and required that a king, the Son of Heaven, be a virtuous ruler. The arts of the early Zhou were essentially a continuation of those of the Shang dynastythe earliest Chinese dynasty verified by scholars, ruling from ca. 1600 to 1050 BCE.. That was especially true of bronze castingan object made by pouring molten metal or other material into a mold. and jade working. The Zhou people used Shang bronze designs as a foundation for their own decorative bronzes, but they also introduced new motifs and shapes.

Over time, the Zhou kings’ authority decreased as the individual states grew more independent, wealthy, and powerful. In addition, a nomadic invasion forced Zhou rulers to flee to the east and build a new capital at modern-day Luoyang(loo-o-uh-yahng). This marked the beginning of the period known as the Eastern Zhou dynasty (771–221 BCE). The Eastern Zhou was an era of intense political turmoil. States were at constant war with one another for land and political control. In fact, the latter half of the period is known as the Warring States Period (475–221 BCE), when the small states eventually consolidated into seven strong kingdoms. These seven states fought with each other for mastery until one of them, Qin(chin), succeeded and established the Qin dynasty (221–206 BCE).

The weakening of central Zhou authority is reflected in the visual arts. Bronze objects were no longer used solely for state and religious rituals. Local rulers could commission and purchase bronzes to display their status and wealth. This was evident in bronze inscriptions. Zhou bronze inscriptions (F1930.54a-b) lengthened and often recorded some honor or achievement of the living aristocrat, reflecting the elite’s desire to document their status and prestige. A new addition to Zhou bronzes are musical instruments, including bells (F1941.9). From the ample discovery of musical instruments in Zhou tombs, it is evident that music played an extremely important role in the Zhou dynasty, whether for religious or recreational purposes. New decorative techniques were invented. Pictorial depictions of ancient Chinese life, such as hunting scenes (F1915.107), appeared for the first time. New casting techniques, such as the lost-wax methodmethod of metal casting in which a molten metal is poured into a mold that has been created by means of a wax model. Once the mold is made, the wax model is melted and drained away., made possible an even greater range of styles and decoration.

The jade objects of the Zhou were larger in number compared to those of the Shang and made in a wider variety of styles. Like bronzes of the period, jades were used less often as ritual objects and more as ornaments and symbolsshapes or designs that are recognizable and have a meaning associated with them of status and wealth.

The arts and humanities also flourished during the Eastern Zhou dynasty. Many of China’s great thinkers lived during this period. New ideas of all kinds emerged, including the schools of Confucianisma system of ethical and philosophical teaching associated with the Chinese philosopher Confucius (551–479 BCE). He developed a system of thought that stressed the importance of good government, social order, and harmonious and moral living. (emphasizing social and family structure), Daoism(dow-ihz-uhm) a philosophy based on the ideas of the Chinese thinker Laozi, who taught that people should be guided by a universal force called the Dao (Way). (following the patterns of nature), and legalisma Chinese political philosophy based on the idea that a highly efficient and powerful government is the key to keeping social order. (promoting systematic rewards and punishments). They addressed the most important question of the time: how to create a stable and harmonious society. These competing philosophies and systems of thought continued to influence Chinese beliefs in later eras, and many of them are still in active use today. 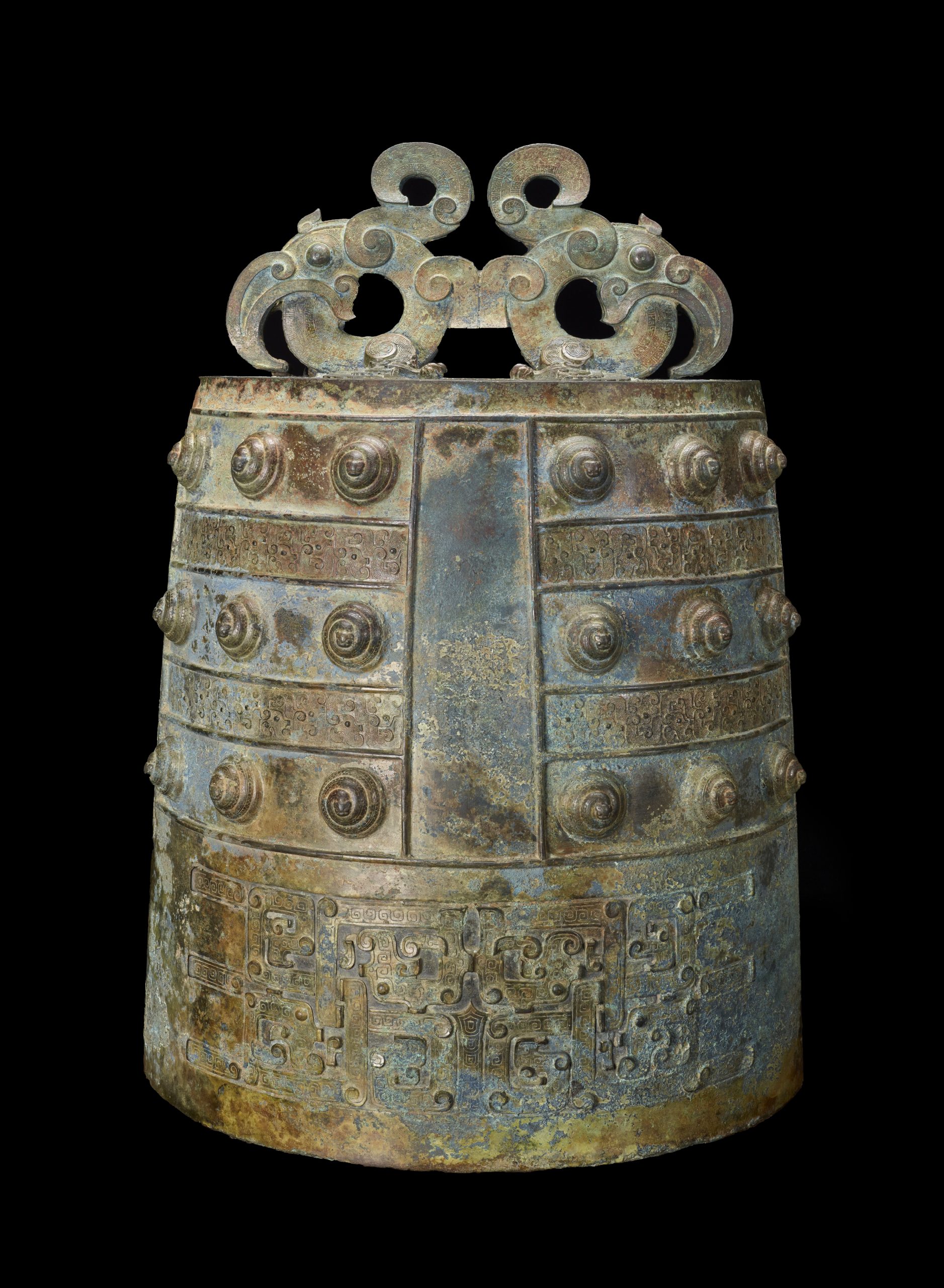 Students will develop an understanding of the bronze bell as an indispensable part of the ancient Chinese court and ritual events. Students will learn about music as a virtue-promoting characteristic of Confucianism.